This aquatic arcade racer is fun, fast-paced, and features fantastically varied courses to compete on.

Do you remember playing Hydro Thunder on the PlayStation, the Dreamcast, the Nintendo 64 or in arcades? It doesn't matter. All you need to know going into Hydro Thunder Hurricane--other than which buttons do what--is that there's a good chance you're going to lose hours of your life trying to leapfrog friends on its leaderboards. Enjoyable multiplayer options support up to four players locally and up to eight online, but this fast-paced boat racer really shines in its single-player events where you're regularly made aware of how your performance compares to that of your closest friend or rival. On brilliantly designed courses littered with ingenious shortcuts, figuring out how to shave seconds off your best times while navigating occasionally troublesome waves is a lot of fun. The water isn't always believable, but it serves its purpose, and given that course hazards include dinosaurs, UFOs, and even a Norse god, realism isn't something you're likely to be too concerned with while playing.

Other than keeping an eye on how you're doing in relation to friends, much of your time in Hydro Thunder Hurricane is spent figuring out where your next boost is going to come from. All of the 10 vessels that you gain access to can accelerate to speeds far in excess of their usual maximums using your finite supply of nitrous, and how you replenish that supply depends on which mode you're playing. For example, in Race mode events that start you at the back of a pack of 16 boats, canisters of nitrous are found floating in midair all over the place and can be collected simply by driving through them. Blue canisters only replenish a modest amount, but they generally require very little effort to collect. Orange canisters that almost completely fill your boost meter are less common and, more often than not, require you to deviate from the most obvious racing line to grab them.

During the excellent Ring Master events, you earn nitrous by passing through rings that are arranged on the courses in such a way that you're forced to take very specific routes around them. On the novice difficulty setting, said rings are much larger than your boat and are arranged so that they're relatively easy to pass through without missing any. As you progress to the pro and expert levels, though, the rings get smaller and you're forced to take much less straightforward routes to pass through them--often taking shortcuts that you might not have otherwise found. Failing to pass through a ring instantly depletes your nitrous supply and adds one, two, or three seconds to your time depending on the difficulty level, so expect to use the restart option a good deal as you memorize their positions through trial and error. Ring Master events can be pretty frustrating the first couple of times you play them, but as you learn the layouts, it's incredibly satisfying to complete them, and ultimately, you won't be worrying about whether you hit rings or not but whether you're hitting them on the quickest possible racing line. Ring Master time trials are well suited to leaderboard competition because, unlike conventional races where the AI opponents can cause trouble, they play out the same way every time. Even the waves in the water are tightly scripted, so if a big one throws you clear over the top of a ring on your first attempt, you know to slow down and ride it on the second.

Other single-player modes on offer in Hydro Thunder Hurricane include Gauntlet and Championship. Gauntlet events are time trials made more challenging by exploding barrels that are floating in the water all over each course, while Championships are between two and eight events long and incorporate all of the previously mentioned event types. Sadly, there's no multiplayer support for Gauntlet mode or an option to race against the ghosts of other players in any mode--which would've been an especially welcome option in Ring Master. Those of you who prefer real-time competition to leaderboards are well catered to, though, with split-screen races for up to four players who compete against four AI racers, online races for up to eight players (who might be playing on as few as two consoles using split-screen), and a cat-and-mouse-like Rubber Ducky mode. In the latter, players divide into two teams, and one player from each team takes the controls of a huge rubber duck. The winning team gets its duck across the finish line first, using any means necessary.

Regardless of which mode you're playing, the futuristic-looking boats at your disposal are more than up to the job at hand. In keeping with their various ratings for acceleration, top speed, and handling and control, all of the boats feel a little different but not so much that it's ever difficult to climb out of one and into another. Even the boats with the lowest handling ratings are suitably responsive, and because those boats are also some of the fastest, mastering their controls is particularly rewarding. It's a little odd that you have a jump button but are unable to control your boat's pitch either on the water or in the air, but the only time you really miss pitch controls is when you're trying to recover from a collision that sends you tumbling into the air. At that point, you might already be reaching for the restart option if you're embroiled in a hotly contested leaderboard battle.

Hydro Thunder Hurricane's boat and mode selections are good, but the courses really steal the show. There are only eight of them, but they're so incredibly varied and fun to explore that you're unlikely to tire of racing them over and over again. One minute, you're racing through the sewers of Paris with a police boat on your tail; the next, you're trying to navigate a big wave caused by a dinosaur on a tropical island in the middle of the Bermuda Triangle. Then, shortly after triggering the wave machine in a purpose-built speedboat racing stadium in Japan, you find yourself in the Scandinavian fjords, battling huge waves caused by storms, rock slides, and a Norse god that doesn't appear to be a fan of water sports. All of these courses feature numerous shortcuts; some of them are obvious and easy to use while others are difficult to find and challenging to take even after you discover them. Most of the courses are point-to-point affairs, but a few of the shorter ones are circuits that you race three laps of every time you visit them. Changing water conditions and some impressive surprises ensure that no two laps are the same on these circuits, and it's fun to figure out which routes and shortcuts work best on which laps.

In fact, it's fun to do just about anything in Hydro Thunder Hurricane because everything this game does it does well. The boats look good and handle well, the courses look even better and are a treat to race around, the three different event types are varied enough to keep things interesting, and the frame rate rarely falters--even when there are four of you playing split-screen in the superfast expert boats. You'll definitely get the most out of Hydro Thunder Hurricane if you have friends who are playing the game as well, but even if you're playing solo, there are more than enough events to compete in, hidden packages to find, and additional boat skins to unlock to keep you entertained for many hours. 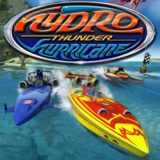