Hunted: The Demon's Forge buries its rock-solid ideas under a mound of execution blunders.

A game's success or failure often rests on the little things. An otherwise ordinary game can soar to great heights by nailing the details; conversely, a smattering of small flaws might cause fine ideas to flounder. Hunted: The Demon's Forge is the latter type of game: conceptually sound, yet clumsy as delivered. As a result, this cooperative action game feels like an ancient relic, in spite of its attempts to use modern gameplay elements popularized by Gears of War and co-opted by countless games since. It's a shame that a game with such promise feels so unfinished. Imagine this scenario: you take up your bow, and a buddy grabs his mace and shield. Together, you cut through swaths of maniacal monsters, seeking the most effective ways of ridding your fantasy kingdom of a rising menace. When Hunted comes together, it captures the essence of such a rambunctious adventure. But sloppy locomotion, technical glitches galore, and all sorts of basic flaws rise up to smite you. PC players also get a special problem to call their own: barely functioning online play. And that's a damning issue in a game designed to be played with another.

In spite of its numerous foibles, Hunted: The Demon's Forge isn't devoid of fun, and it boasts a great concept: combine the best parts of fantasy hack-and-slash adventures and Gears-style cover shooting, and then throw in some loot. One player assumes the role of Caddoc, a bald-headed melee specialist. The other takes over the ample assets of E'lara, an archer with impossible curves and no desire to shield her backside from swords, arrows, or the stares of lascivious passersby. Together, you move through dungeons, flaming villages, and more dungeons, slicing away at the titular demons while occasionally casting spells, grabbing loot, and trading barbs about who killed the most meanies in that last battle. Caddoc and E'lara are in it for the cash and are hardly heroes worth remembering once your eight hours with Hunted's campaign come to a close. Yet they share an easygoing camaraderie that's appealing, if wholly unexplored.

Hunted's good aspects follow from that mishmash of gameplay elements. Both characters wield melee and ranged weapons, but E'lara is best when shooting from afar while Caddoc wades into the fray. When you're wielding a bow, Hunted plays like a cover shooter: you crouch behind a low barrier or press your back against a wall, lean out, and fire. With sword or axe in hand, you swing away at a limited variety of snarling savages, rolling and blocking when necessary. As either character, you cast spells that work well in tandem with your partner. E'lara freezes enemies, and Caddoc smashes them to pieces. Caddoc lifts monsters into the air and slams them into the ground, while E'lara fills them with arrows. Two brands of action plus varied magical skills make for some fun battles. That diversity goes a long way toward veiling just how linear Hunted's levels are, how mundane its infrequent puzzles are, and how few enemy types there are.

If you don't buddy up with another, the AI takes over and does a respectable job, if not an outstanding one. AI companions are there to distract enemies and soak up a lot of damage rather than to dish out the pain. They rarely need reviving on medium difficulty, and as a result, playing on your own is easier than joining a friend. And things get mighty challenging in co-op. Demons can combo five attacks together in succession; should you fail to block the first one, you've no choice but to be walloped, which means going from full health to practically none. The limited number of health potions and the inconsistent rate at which potions drop add to the occasional combat frustrations that develop. Should you like the challenge and want to explore it further, you can play around with Hunted's level creator, called the Crucible. It's easy to use, but the results are limited: player levels are simply a series of battle arenas separated by doors that open when you have defeated every spawning monster. The limitations don't end there, however. You unlock new enemies, items, and arena environments by accumulating gold during the campaign. To earn the most interesting playthings, you need to collect a lot of gold, which means playing lot of Hunted. This is a disappointing restriction in which the reward doesn't match the effort. And while you can allow others into your private realm, there is no way to share your creations or download others to explore at your own leisure.

You stumble upon plenty of random equipment on your adventure, though looting isn't Hunted's best feature. You find equipment on the ground or smash weapon racks, but the loot that falls from a rack is only for the character who smashes it. Most of the time, what falls is useless, making you wonder whether the team might have earned something more valuable had the other player smashed it instead. You might also be annoyed by the lack of a damage-per-second stat on weapons. There are slow, medium, and fast bows, for example, but the base damage stats don't help you compare different types. This is a small gripe, but it is one of many senseless, clumsy elements that crop up time and again in Hunted. A list of such oversights could continue for pages. You automatically pick up potions by walking over them, but to collect gold, you have to press a button. Why not have you collect it automatically as you do other items? You can perform finishing kill moves at random times, and these slow-motion brutalities look cinematic enough. But performing one means leaving your partner without assistance for several crucial seconds. Sure, you don't have to perform the action if you don't want to--but the game encourages you to do so. It feels as though Hunted's creators chose to implement the mechanic because it looks cool, and because all the popular games do it, rather than because it belongs. In actuality, it doesn't belong: it interferes.

You could say the same thing about the Gears-style "roadie run" sprinting. The barely controllable run often causes the screen to jitter uncomfortably. And in the case of a particular boss battle, when you have a limited time to run at full speed away from a charging monstrosity, it's a mess. For some reason, developer inXile chose to throw in useless cover spots between you and your destination, making it easy to slide into cover by accident when you need to charge forward. In fact, that entire boss fight is a mess. When you first enter the arena, you are prompted to hold a button so that the camera can redirect your focus to a key event, as so many games do nowadays. But you aren't given enough time to react, or even understand what is going on, before you're crushed to a pulp. (Hello, trial and error.) Hunted is fond of taking away control in this manner. During the final boss battle, for example, the camera pulls away to show you spires falling over, multiple times. But all the while, skeletons stream toward you. You might still take damage from this undead crowd, but you can't do anything about it, because Hunted: The Demon's Forge prioritizes cinematic excess over basic playability.

These are but some of the examples of flaws that might have been minor had they not been part of an ever-growing stack of them. It's possible you can overlook the aberrations in favor of the basic fun Hunted doles out amid all this silliness, but some problems aren't so easily forgivable. A scripting error can keep a bridge from falling after battle, causing you to wander around aimlessly until you realize a bug has wasted your time. (The only fix: reload.) In the Xbox 360 version, a crash at the very end of the final boss fight could force you to spend more not-so-quality time with those pesky skeletons. On the PC, you may not even get to take advantage of online co-op, Hunted's central feature. Trying to join someone's game generally gets you booted back to the menu a few moments later, and hosting your own game isn't likely to be more successful. Few players are currently able to hook up, but if you should somehow manage it, don't expect a fully-featured experience. There is no text chat or built-in voice communication; you could use an outside chat program, but that need runs contrary to the purpose of matchmaking in the first place. Nor do PC players get the split-screen play included on consoles, but it's hardly a great loss: the tiny bit of screen real estate granted to each player makes this a pitiable, last-resort option.

It's amazing that with all these issues, Hunted: The Demon's Forge isn't an awful game, but rather an underperformer. And though it's easy to call out the many issues, Hunted has qualities worth polite applause, though not a full ovation. You might at first be annoyed that you can buy and upgrade skills only at specified locations, and can do so only when joined by your partner. But this is actually a sensible solution that ensures that your buddy doesn't leave you to the spiders while he tinkers in menus. The voice acting and soundtrack are both dramatic, giving this world an air of urgency and occasionally subverting the drama with a touch of wit. You sometimes commune with the dead, their spirits rising from their corpses, mourning their own lives and telling you of demons and dragon hunters. These soliloquies are well acted and well written, and it's worth pausing to listen and soak in the ambience. Hunted is not big on ambience as a rule, however--not unless you consider "brown" as a kind of atmosphere. This is not an attractive game. Its goal: be as dark as possible. That's a fine goal in a game blessed with good lighting and art, but Hunted looks murky even in daylight, the grimy enemies getting lost against dingy castle walls. The PC version is the best-looking of the three, as you may expect, but even there, you can't escape the texture pop-in (morphing from barely existent to mediocre), or art design that declares "generic dungeon crawl ahead."

Don't dismiss Hunted as a complete disaster. Smashing an enemy frozen temporarily in ice? Frigid fun. Finding an elemental weapon in a secret hiding place? Satisfying. Zapping a roaring beast with lightning? Electric. But for every moment of fun, there's something ridiculous to add to the list of oddities. Rubble that rises three inches off the ground and generates a cover prompt when you near it. Invisible walls in bizarre places, keeping your arrows from finding their marks. Overused contextual prompts that might have you performing a finisher when you have only a few crucial moments to toss your fallen comrade a revival elixir. How much fun you have with Hunted: The Demon's Forge depends on how willing you are to overlook those oddities in favor of the bigger picture. You could say the same about most games, but then again, few games with so much promise suffer under the weight of a thousand and one tiny pebbles.

View Comments (11)
Back To Top
5
Mediocre
About GameSpot Reviews 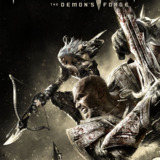