The call of the wild.

PC version update: Horizon Zero Dawn's sprawling open world is laden with mystery. Futurist tech of a distant past lay buried as beast-like machines roam the surface of a new world where civilizations thrive as hunters and gatherers living off the land. And as you slowly unravel the complicated past of Aloy, our protagonist, you come to grips with the calamitous truth of what led to the world as they know it. I spent around 12 hours with the PC version in pre-launch form to evaluate this port of a once-PS4-exclusive from 2017, and it has come with mixed results.

Horizon Zero Dawn remains a visually enticing game with rich natural environments and snow-capped mountains to trek through, all of which can look better than they did on PS4 and PS4 Pro if you have the right PC specs. Given the density of certain towns or villages, or chaos of some combat scenarios, frame rate can take a considerable dip, making it a fairly demanding game, but it may also noticeably stutter occasionally, making for some inconsistent performance. (I've used a Core i7-7700K, RTX 2080, and 16GB of RAM at ultrawide 2560x1080 resolution using maximum settings and TAA, and had dips to around 35-40 FPS in those intense moments.)

Some game-affecting bugs have been present in my experience as well. The Concentration mechanic--which lets you zoom in and slow down time to carefully aim your bow--simply does not slow down time. Pulling up the weapon wheel should also slow down time, but it does not in my case. These are key mechanics that are useful in the game's many combat situations, but are not functioning properly at the moment. However, a day-one patch is planned for release this week, and I'll update this note once that lands.

Overall, Horizon Zero Dawn can be a fascinating open world action game--it goes to great lengths in building out its world and establishes an excellent combat system that relies on precision aiming and outsmarting enemies with its many tools and weapons. It does need some work on the technical side, though. -- Michael Higham, August 5, 2020

A society with a foggy past and an uncertain future is truly lost; such is the reality for the denizens of the world of Horizon Zero Dawn. Roughly 1,000 years from today, tribal communities lead primitive lives, surrounded by mysterious high-tech fossils of the Old Ones--the fractured legacy of our real world, the result of technological advancement run amok. Diminutive animals like rabbits and boars still roam the wild, but they trot in the footsteps of imposing mechanical beasts that dominantly stride through dense jungles and lurk on snowy mountain tops.

How the world ended up in disarray isn't clear at first, but Aloy, an orphaned outcast who locates an advanced communications and analysis device, holds the key to unlocking these mysteries. Using her newfound tool--known as a Focus--you can tap into techno-artifacts and glean info about the past. While the full story of the world's downfall takes a while to unravel, the fascinating revelations you eventually uncover more than make up for time spent navigating less-than-compelling tribal politics during the first half of the game.

The dueling themes of nature and technology are present in Aloy, who's forever changed when she accepts technology into her otherwise primitive life. She transforms in so many ways throughout her journey, and it's amazing to look back when all is said and done, reflecting on not just the awesome challenges you've overcome, but also on how much confidence and maturity Aloy's gained in the process.

But no matter where the story takes you, combat--deservedly--owns the spotlight. The world's intricately crafted environments teem with electric beasts and warfaring cultists, and the pronounced excitement of controlling Aloy in the midst of rampaging enemies is a near-constant thrill.

This excitement comes in part from Aloy's ability to deftly leap out of harm's way and bound right back into action, but her arsenal of weapons and ammunition are the special ingredients that give you the ability to topple Zero Dawn's massive robotic monsters with power and style. You start with a simple bow and arrows, but you eventually gain access to elementally charged bolts, slingshots that lob explosives, and an assortment of traps that can surprise or constrict unsuspecting enemies.

Juggling these tools mid-fight is made easy by a weapon wheel that opens with the tilt of the right analog stick and slows down time to give you a moment to plan. It's simple to get the hang of, and you never have to put yourself in too much danger when looking for your weapon of choice; you can still run, dodge, and jump while accessing the wheel.

Dodge-rolling between enemies, turning around, and jumping to deliver a critical blow while drawing and aiming your bow in slow-motion never gets old. There are no actual supernatural powers on display, unless you count the fact that Aloy's Focus can pinpoint enemy weak points. Nevertheless, when the controls seep into your subconscious, heroic displays of cunning, might, and fearlessness lend Aloy a superhuman quality. You can employ basic stealth tactics and sneak up on enemies, but when you're properly armed, there's hardly a compelling reason to deny yourself the pleasure of Zero Dawn's head-on engagements.

While sprinting around the battlefield and fighting with a range of projectiles makes for a great time, melee combat is unfortunately less effective. Your only options are light or heavy spear attacks, and when fighting indoors, you're more likely to hit a wall than your intended target. Furthermore, where spear-wielding enemies can block incoming attacks, you cannot, putting you at an immediate disadvantage when relying on your spear. But you're never forced to use melee, and can always revert to fighting with a mix of evasive maneuvers and projectile weaponry.

When the controls seep into your subconscious, heroic displays of cunning, might, and fearlessness lend Aloy a superhuman quality.

To keep fights interesting over dozens of hours, Zero Dawn doles out new robotic enemies at a gratifying pace, introducing slightly larger and more complex beasts by the time you gain mastery over less challenging foes. Where you may face small bipedal Watchers as well as approximations of horses and bulls at the start, you eventually engage with rampaging armored crocodiles, jaguar-like bots with cloaking devices, and, yes, giant enemy crabs. By the end of the game, you can confidently roll into battle facing a towering metallic T-Rex knowing full well that you are in control, despite your relatively diminutive stature.

Being an effective hunter in Zero Dawn requires one part execution and one part knowledge--namely, understanding what enemies are capable of and what parts of their body are most vulnerable. A well-placed shot on a body part that glows through the use of Aloy's Focus can knock off a piece of armor and expose a robot's vulnerable innards. It's also possible to disarm enemies and use their own weapons against them. Your standard weapons are effective enough, but nothing beats finishing a fight with a massive laser cannon you've earned through tactful aggression.

Zero Dawn's map is predominantly wild, but tribal settlements are easy to find. Most are modest--just a few shacks and a store--but a handful of miniature kingdoms offer sizable populations of merchants and quest-givers. At best, typical side quests are vehicles that propel you into the far-reaching wild with some semblance of narrative motivation, but it's common to find the personality of the quest giver more interesting than the ultimate meaning behind your objective. With larger questions and fates at play in the main quest, Zero Dawn's sub-stories simply can't compete.

While combat is at the forefront of Zero Dawn, you habitually gather any resource in reach as you travel from point A to point B. Plants and pieces of animals and robots alike are necessary for crafting Aloy's ammunition and traps, upgrading item storage, and brewing health potions. When it comes to making items, it's as simple as looking through a crafting menu and seeing what is or isn't available based on your current stash of resources. Selling items is a painful process, however, as there's no way to sort your inventory. You have to scroll through a gallery grid of up to 100 icons and manually read details to determine what to keep and what to sell. For a game that manages to handle complex systems in real-time with aplomb, it's odd to see something as basic as inventory management feel like an afterthought.

There are sets of rare artifacts to find in the wild, though the material rewards you get for collecting an entire set and trading it to a merchant are a bit of a letdown. While this realization comes as a slightly sour note, any excuse to look around a new corner or down a new valley is a good excuse to jump back into battle. And don't write Zero Dawn's open-world off just yet; items aren't all it has to offer.

A handful of alien-like constructs lie embedded in the earth, and at the heart of each of these intricate, otherworldly dungeons is a machine that will give you the power to hack a specific category of robotic animals. Some robots will simply fight on your side or leave you alone when hacked, but a few allow you to ride on their backs. Granted, this option is limited--no, you can't ride a robot T-Rex--but it's the one argument for the game's stealth mechanics, as you can only hack a robot by sneaking up to it.

Looking beyond your reward for conquering these high-tech dungeons, they also exist as the antithesis to the natural splendor that permeates most of Zero Dawn. Yet from the heat of dusty plateaus to the cool shadows of metal monstrosities, you'll feel at home no matter where you travel. This is because Aloy and the beasts she topples are walking embodiments of the dueling themes that define their world. Zero Dawn is a bit too concerned about establishing its primitive side at times, but by and large it does a fantastic job of bringing its two halves together for a truly captivating experience.

This is the first departure from the Killzone series for developer Guerrilla Games, and though you might think the team took a risk by stepping out of its FPS comfort zone to create a third-person open-world action game, you'd never know it was their first rodeo. For every minor imperfection, there's an element of greatness that recharges your desire to keep fighting and exploring Zero Dawn's beautiful and perilous world. Guerrilla Games has delivered one of the best open-world games of this generation, and redefined its team's reputation in the process.

View Comments (1744)
Back To Top
9
Superb
About GameSpot Reviews

Peter played Horizon Zero Dawn for 55 hours, finishing the main questline and enough side quests for an 80% completion rating. GameSpot was provided with complimentary copies of the game by Sony. 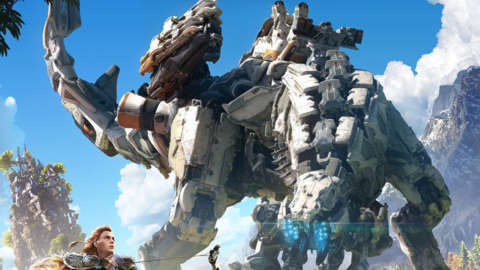 Horizon Zero Dawn is an action role playing game exclusively for the PlayStation 4. As Horizon Zero Dawn’s main protagonist Aloy, a skilled hunter, explore a vibrant and lush world inhabited by mysterious mechanized creatures. Embark on a compelling, emotional journey and unravel mysteries of tribal societies, ancient artifacts and advanced technologies that will determine the fate of this planet, and of life itself.