This role-playing adventure strikes an enjoyable balance between classic and new elements, risk and reward, combat and crafting.

When your job is to determine the fate of the world, it's important that your companions and your swordplay are able to back you up. The strength of Hexyz Force is a battle system that lets you be both impulsive and strategic, smiting your foes thoroughly without getting careless. Supported by a diverse cast and two distinct story arcs, this game offers up a classic dungeon-running adventure that focuses on the basics and proves to be a satisfying experience.

The world of Berge is marching to an unknown fate. The goddess Norvia brought forth life and populated the land and then set a number of special divinities to watch over her new creations. When the god of destruction arrived to ruin the party and raze civilization, the holy divinities sacrificed themselves to save the peoples of the land. The force of these divinities is continually reborn into the world as Hexyz, those individuals who inherit the mighty powers of their forebears. It is the Hexyz who must ascend the Tower of Judgment and demonstrate whether the balance of force in Berge is tilted toward creation or destruction, and so dictate the future of all living creatures. No pressure.

Your two main characters are thrown into their respective roles, and they react differently to the weight of their divine duty. The serious-minded Levant makes the transition from responsible knight to scion of the gods with little apparent effort, but his counterpart, Cecilia, would rather hand all this heroic nonsense off to someone else. Anyone else. Their journeys intertwine at several points, but each has obstacles to overcome. While most of the classic role-playing tropes make an appearance--a dark god sealed for centuries is about to break loose--the narrative moves briskly along and stays focused on the development of the cast. The voice work is used sparingly and to good effect, with the requisite outbursts in battle punctuating your mightiest skills.

The battle system is composed of several facets that come together well. Each hero can equip a holy weapon known as a ragnafact, with its own innate skill set and one of three aspects: pearl white, cerulean flame, or crimson lotus. Using the proper weapon against a foe with a weaker aspect leads to a boost in damage. The various weapon abilities let you unleash strong attacks against single targets or strikes against groups of enemies, which can often obliterate a screen of creatures with surprising speed. But using your ragnafacts costs you ragna points, and you have a limited pool of these. Since you can replenish your ragna points only by leveling up or visiting a special force site, you have to watch your progress carefully--but not so carefully that you can't stomp on demons with gleeful abandon. There's a nice balance between dungeon crawling, managing your ragna points and items, and keeping a wary eye on whether a level-up is imminent that allows you to be cautious but still kick monster butt all over Berge. Because of this, the occasional necessity of level grinding or thorough exploration still feels like a good time instead of a dangerous chore, while preserving the possibility that your party will get wrecked if you're thoughtless.

Besides ragnafacts, you can equip a slew of weapons and items to bring with you into the fray. The game's item-crafting system is a nifty piece of work that lets you take all the various bat wings, mermaid scales, and mantis claws you earn from enemies and turn them into useful stuff. All of your equipment is made in this way, and the items you can create will become available once you get the proper brew of critter pieces and other incidentals in your inventory. Weapons that you create are much less powerful than ragnafacts and have a limited number of uses, but they will not consume your precious ragna points. Healing items allow you to skirt the edge of disaster should a healing character end up temporarily silenced or smeared on the floor. You can make a ton of items, and almost all of them are useful in certain situations. Unused items can be turned into force points, a currency that you also earn from battle that lets you craft superior objects or upgrade your ragnafacts. It's an efficient and enjoyable process, and you'll be reflexively checking your crafting menus once you get a new fairy spleen, for instance, simply to see what it can be turned into.

The 3D graphics are simple and tidy. Your own characters are of the short and cute persuasion, and they contrast nicely with the detailed and expressive portrait art. There are moments of animation used sparingly throughout that add some visual excitement to important events without being too intrusive. Enemy models are reused constantly with color swaps, which is a shame. It takes some of the excitement out of a new dungeon area when you realize that you're still fighting fairies, wolves, demons, and others, only now they're all purple. Some of the models are a bit more primitive than others, and while dungeons tend to throw in some visual interest with different tile designs, the overall impact is merely adequate. There's a surprising variety of music, which helps to give areas a little more character, but there's not a lot in the way of towns and cities to visit, so Berge ends up seeming a bit bare. A series of rousing boss themes always lets you know when a major fracas is about to begin.

You can wrap up a single campaign in about 20 to 25 hours, and since the two main protagonists inhabit different countries and carry out different missions, there's a lot of incentive to play the second campaign once you finish the first. You'll unlock a few extras, such as database gallery of characters, items and music, but you can't carry over any of your former strength. While you encounter the rare townsperson who would like you to perform a certain task, the main narrative arc encompasses just about all the meat in the game. This isn't a challenging ultra-epic with a deep storyline and characters you'll forever hold close to your heart. It's a standard role-playing game that manages to elevate itself through well-balanced battle and item systems and a world that you don't mind saving. Hexyz Force delivers all the necessary basics of a good adventure, with thoughtful execution. 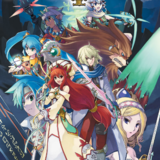 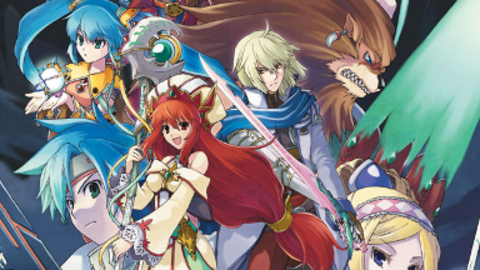 Hexyz Force for PlayStation Portable is a traditional RPG taking place in the world of Berge.