Heavenly Sword feels like a summer action flick. It's full of nonstop action, and it looks terrific. Unfortunately, it's over far too quickly.

Ever since it was first shown, Heavenly Sword has drawn comparisons to God of War. Like SCEA's flagship franchise, Heavenly Sword has great production values, exciting combat, and an enjoyable story with interesting characters. What it doesn't have is length, clocking in at just six-and-a-half hours from start to finish. So while it's a great game, it's a great game you can beat in one sitting.

Like God of War, Heavenly Sword starts off with what appears to be the death of the game's main character, so the story is told via flashbacks. In this case it's a young woman named Nariko, an outcast who was thought before she was born to be the one to fulfill her peoples' prophecy surrounding the Heavenly Sword. The titular sword is a dangerous weapon that grants tremendous power to whomever wields it, but at the cost of that person's life. Nariko's clan has protected the ancient weapon, but they've grown weak and find themselves under attack from King Bohan, an evil despot who wants the sword for his own use. In this desperate hour Nariko's people and even her father are finally forced to admit that she is their only hope. The game's story is well written (if a bit predictable), and the characters are brought to life by some fine performances by the actors who portray them.

There are a few rudimentary door-opening puzzles and a handful of situations where you'll have to quickly press a button that appears onscreen as you make your way through the linear levels. But most of your time with Nariko will be spent killing thousands of enemies in her quest to keep the Heavenly Sword from falling into Bohan's hands. Nariko has three different types of attacks that she can perform by standing in a specific stance. Speed attacks are performed by pressing the square or triangle buttons. Her ranged and power stances are done by pressing the L1 or R1 buttons respectively. Attack combos can be strung together by pressing square and triangle in specific patterns or by switching from one stance to the next midattack.

Using combos and attacking with style are important not only because they're the quickest way to defeat an enemy, but also because they're the key to unlocking more combinations and even bonus content. Each consecutive attack you perform without getting hit fills a meter that's divided into thirds. Perform enough combos and you'll earn a new combo; reach the second and third level and you'll unlock making-of movies, artwork, and more. You'll also gain access to superstyle attacks along the way. When you've earned enough style points you can hit the circle button and trigger a short cutscene where Nariko finishes off a foe with creative flair. It's certainly beneficial to learn a few combos, but you can get through the game just fine doing the same few over and over again.

However, you'll need to vary the position you attack from. Some enemies are only vulnerable to certain attack styles and some can be attacked only with a successful block or counter, both of which are tied to the three different stances. As bad guys attack, they'll flash a color that indicates what kind of attack is coming. If it's a speed attack you don't have to do a thing; Nariko will block it on her own. If it's a power attack though, you'll have to quickly press the R1 button to block. If it's red, it's an unblockable attack and you'll need to roll out of the way by moving the right analog stick. Counters are performed by quickly pressing the triangle as an attack is imminent. They're a great way to quickly dispatch an enemy, though they're tough to time when you're surrounded by a few dozen people, all attacking at different moments.

Heavenly Sword keeps things fresh by mixing in a second playable character and a few different play styles. For some of the game you're placed in the role of the lovably quirky Kai, a bizarre catlike girl whose favorite "game" is to shoot bad guys with her crossbow. She can't fight at close range, and can only create separation between herself and the enemy by pushing them off of her. The awkward switch from one camera angle to another that occurs when you go from running to aiming makes it tough to get a shot off, so the levels where Kai's on foot and fighting aren't her best moments. It's good, then, that most of your time spent as Kai has you simply shooting bad guys with the game's enjoyable motion controls. By continuing to hold the fire button you can control Kai's arrow midflight in slow motion by tilting the Sixaxis left, right, up, and down. Nariko has a few levels like this where she mans a cannon and wields a rocket launcher as well. Kai's sections are sometimes a tad too long, but it's quite satisfying to guide an arrow across a level and then land it in a soldier's groin or head.

Overall the game's combat is a good mix of being easy to learn but deep enough that you don't feel like you're just hitting the same two buttons and seeing the same attacks over and over. This is an impressive feat considering how shallow the game's enemy artificial intelligence is. Rather than challenging you with smart bad guys with a wide range of moves, the game simply tries to overwhelm you with numbers. Sure, some are fast, some are strong, and some shoot arrows at you, but none of them exhibit any sort of creativity in their attacks. Even the bosses, who at least attack in new ways, aren't particularly clever and are challenging only because their life bars are seemingly endless. Slightly repetitive or not, it's hard not to have a blast when you're controlling a lone heroine against more than a thousand enemies, all of which are onscreen at once.

Heavenly Sword is elevated by its top-notch presentation. Nariko's attacks are beautifully animated and flow seamlessly from one to the next with only a little slowdown here and there. It's a little disappointing that there's not more visual variety to the soldiers, but the few types featured are all well designed and easy to tell apart. This is important when you're trying to use a certain fighting style to take out a specific enemy in a crowd. The levels are gorgeous and have an almost hand-painted look to them--especially when viewed from afar.

Many games come to a screeching halt when telling their story via cutscenes, but this is where Heavenly Sword excels thanks to is its main characters, which are all wonderfully designed and animated: beautiful, compassionate Nariko; oafish, sympathetic Roach; evil-yet-funny King Bohan (portrayed by Andy Serkis, who played Gollum in Lord of the Rings); and the curious, catlike Kai. The cutscenes are gorgeous, marred only by some lip-synching issues and a frame rate that sometimes stutters at the start. You really get a sense of the characters' personalities just by looking at them and watching them move. A well-written and often surprisingly funny script is brought to life by Hollywood-quality performance from the actors, who fit their respective characters perfectly. The inclusion of English, Spanish, German, French, and Italian voice options ensures that just about everyone can enjoy the performances, too. The music is a mix between orchestral movie-style tracks and more modern-sounding instrumental pieces with an ethnic flair to them.

Add it all up and Heavenly Sword is a fantastic game from start to finish. It's just a shame that it's not longer. The developer made the wise decision to keep the action tight by not including any fetch quests or backtracking, but skilled players will probably finish the game in a little more than six hours, and it probably won't take longer than eight hours for anyone else. There are some DVD-style extras to unlock and you can play it again on "hell mode" once you've beaten it; just don't expect to get much more than a great weekend for your $60. If you're OK with that, you won't be disappointed in Heavenly Sword. 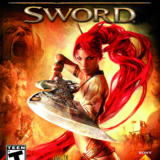 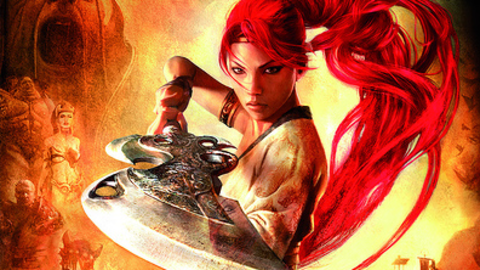 Heavenly Sword puts you in the role of a powerful heroine who must hack her way through waves of enemies.