With only minimal improvements to a well-worn formula, the Harvest Moon series is starting to show its age.

As part of its 10-year anniversary celebration, Natsume has released two new Harvest Moon games, one for the Wii and another for the DS. The Wii game is the first for the console, and though the subtitle implies that it is a new game, a number of issues--recycled gameplay, low-quality sound effects, poor camera control--make it feel old. There's a lot of content here, but not much of it is new.

The farmland in this Harvest Moon is Waffle Island, a cheerful place with a struggling economy. Ever since the Goddess Tree died, things have gone down the tubes, and it's up to you to grow the economy and restore the tree. Like every Harvest Moon game, taking care of the story isn't really a top priority; there are plenty of activities to keep you busy outside of the main plotline. Should you finish the story, you'll be given the option to restart the game as your offspring (if you married and reproduced, that is), with all of the items and cash from your first play-through. It's a nice bonus for those who stick it out and finish the game.

Finishing the game may seem like a daunting task early on. After a lengthy intro that holds your hand like an episode of Dora the Explorer, you're let loose without any real information. You'll have to learn on your own, or ask the townsfolk for help if you want to start things on the right foot. Initially, your only income will be from the crops you can afford to plant, but as you progress you'll be able to mine for precious metals and gems, raise animals like chickens, cows, and ostriches, and even take on a few part-time jobs. As your wealth increases, you can expand to other properties, creating a farming monopoly of sorts.

There are an impressive number of things to do and responsibilities to assume, including monthly festivals and community activities. You're almost never forced to do or complete anything if you don't feel like it; you're only bound by your character's stamina, the day/night cycle, and your patience for frequent load screens. This play-at-your-own-pace structure is what the Harvest Moon series is known for, and 10 years later it still works, though it is starting to get stale.

Adding to that tired feeling are the controls, which serve as a perfect example of missed potential. You might hope that a farming sim on the Wii would have some interesting controls--maybe something like thrusting the remote upward to pull up turnips, or slashing it across the screen to chop wood--but the motion controls feel generic and tacked on. Instead of offering unique motions for each chore, the same upward flick can be used for almost everything. None of the uninspired motion controls are mandatory; rather, they serve as substitutions for button presses, so you can play through the game without them, or you can use the classic controller.

Speaking of tacked-on features, there are also a handful of multiplayer minigames to take part in. Each game is inspired by something in the single-player campaign, like rock-skipping or mole-whacking. These games aren't fun at all, and pale in comparison to other minigame collections on the Wii. It takes so much time in the single-player game to unlock them all that you're better off just playing something else.

Like the gameplay, the graphics in Tree of Tranquility match those of previous Harvest Moon installments. Round, cartoony characters populate the world, and though they aren't equipped with the widest range of animations, they are emotive and fun to interact with. The bright environments are bland, boring, and lack detail, their only notable feature being the lifelike shadows that change as the day progresses. The fixed camera gives an adequate view of your surroundings most times, but it can make some activities harder than they should be. When the camera does shift for a better view, the frame rate stutters, especially on rainy days. The frame rate hitches, coupled with constant 5- to 10-second load screens, really kill the pace of the game.

The soundtrack consists of unobtrusive elevator music that blends in with the background and makes the daily rigors of life on the farm pass smoothly. The sound effects and voice samples sound as if they were recorded using the DS microphone in a crowded stadium. Their poor quality is a stark contrast to the pleasing music.

It's been a decade, and the core farming mechanics of the Harvest Moon series are still fun, but they are also unchanged. By combining bits and pieces of previous games, Tree of Tranquility is the largest game in the series, offering dozens of hours of gameplay. Newcomers will find plenty to keep them entertained, but if you've played even one game in the series before, this one may feel a little too familiar. 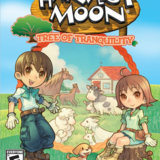