Harold is a cleverly crafted, personality-packed infinite-runner platformer with visual style to spare. Its title character, however, is an awkward athlete and a bit of a loser, both literally and figuratively. Despite Harold's unwavering determination and enduring spirit, he does dumb things, like getting stuck in frozen dog pee and high-fiving a cactus. Thankfully, you don't assume the role of this doomed underdog, but of his equally-determined guardian angel Gabe. As this anime Zac Efron lookalike with wings, you help Harold complete a series of increasingly hazardous, side-scrolling races by manipulating environmental objects, messing with competitors, and giving the slow-moving marathoner an occasional speed boost.

The monkey wrench in this race is that you have no direct control over the perpetual runner, so clearing and altering his path via divine intervention is the key to ensuring that the lanky, bespectacled competitor finishes in at least third place. Earning the bronze is no simple feat, though, as Harold is an intentionally difficult game, one that ultimately has hardcore completionists and seasoned speed runners in mind.

The courses sport the usual platforming elements and obstacles, from moving blocks and slippery surfaces to spiky walls and bottomless pits, but Harold goes beyond the tried-and-true template with some especially inspired touches; Using an ethereal mallet to transform a chomping crocodile into a belly-up bridge and flinging Harold forward with a sling-shotting noose trap never gets old.

Interacting with these hazards involves using the left analog stick in a variety of ways: a single level could see you pushing, pulling, flicking, and rotating the stick over the course of just a few seconds. Given how you also cycle through obstacles by squeezing the triggers, Harold puts your nimble fingers through the paces. It feels fantastic when you're in the zone--circumventing traps, swinging on ropes, and hitting the ground running with a speed boost--but getting to that point takes some serious practice.

While playing guardian angel for Harold usually involves protecting or helping him, you can also harness your heavenly powers to hinder the more seasoned speedsters. In addition to shifting platforms beneath their swift feet to ensure that they jump to their deaths, you can cut ropes just before they grab them, raise ramps they’re about to ascend, and generally make their lives a living hell. If you've ever envied Lucy’s habit of pulling that football from poor Charlie Brown's path, you'll have as much fun tricking these clueless humans as you do helping Harold.

As satisfying--and sadistic--as it may be to pull the rug out from under the competition, they sometimes spawn right where they left off or, worse, further ahead of Harold. This odd design choice doesn't affect the races' pace unfairly, as Harold enjoys this benefit as often as his competitors do. Still, it would be more visually satisfying to see your targets consistently trailing Harold after falling victim to your well-timed traps.

In addition to altering the world to keep Harold on the quickest, safest route, you must carefully monitor and manage puff power. This collectible gift from the gods not only fuels Harold's speed boost--via a swift lightning bolt to the backside--but it also grants extra lives. I found myself using it more for the former, as it's the most effective way to put the pokey protagonist in the lead. Plus, the punishment for dying isn't so severe that bonus lives are a big deal; quick respawns and restarts ensure that you're never out of the race for long. Regardless of how you decide to use puff power, though, managing the scarce resource quickly becomes as important as ensuring that Harold doesn't get a face full of spikes.

Harold's gameplay is complemented by a hand-drawn art style that wouldn't look out of place in a 90s era Disney film. Seriously, swap the runners--during the jungle races--with the cast of The Lion King, and the action wouldn't miss a visual beat. The pop-off-the-screen art style isn't limited to static backgrounds, either; characters animate in amazing, cartoony detail, and gameplay elements, like rope bridge planks that can be popped to persuade Harold to pick up the pace, bring the pretty presentation to life. Sadly, Harold's steep difficulty doesn't leave you with any time to ogle the gorgeous surroundings like a first time tourist. As aesthetically pleasing as the presentation is, only the most skilled players will enjoy having their eyes and reflexes engaged simultaneously.

Harold is at its fleet-footed best when everything clicks; when your divine guidance not only propels the protagonist to victory, but also leaves his cocky competition on the wrong end of a devious trap. But these momentum-fueled moments will be experienced by only the most dedicated players. And even genre enthusiasts will occasionally be let down by the gamepad-only controls; the inputs are generally spot-on, but the mouse-and-keyboard crowd might miss the precision of their preferred set-ups when they're called upon to manage multiple tasks simultaneously.

Although this genre's been done to death, Harold's inspired levels, imaginative mechanics, eye-popping presentation, endless charm, and steep challenge separate it from the pack. It's only that latter element that crosses the line, sometimes making Harold more frustrating than fun. This game’s reflex-taxing level of difficulty isn't for the faint of heart. However, if you're not afraid of a few laps on the trial-and-error treadmill, Harold might just become your next endless-runner fixation. 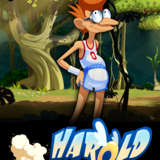 No stranger to soul-crushing games, Matt didn't expect Harold to be so difficult. After not achieving better than 3rd place in any race--and failing to finish others--he was set straight faster than a trouble-making toddler in a time out. 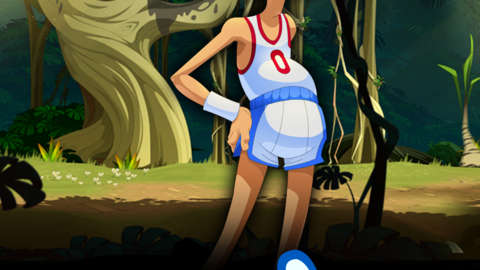 Harold is a single-player side-scrolling platformer with an emphasis on the high-quality hand-drawn style of classic animated films.