A thrilling, moving story and intense competitive multiplayer help Halo 4 continue the series' reign as one of the premier shooter franchises.

Halo is in new hands. After chronicling humanity's defeat in Halo: Reach, developer and series creator Bungie passed the reins to 343 Industries, who has charted a new course for the iconic Spartan and his AI companion, Cortana. In Halo 4, the duo confronts a fresh new threat to the human race and grapples with mortality in a way the series never has before. The result is the most compelling story a Halo game has ever told, conveyed through a campaign that combines the excellent combat, pacing, and environmental design that have long been hallmarks of the series. The intriguing new cooperative mode feels flimsy, but the competitive multiplayer reasserts itself as one of the most exciting offerings in the genre. Halo 4 doesn't just take the franchise baton in stride; it sprints out confidently to keep Master Chief and company at the head of the pack.

At the end of Halo 3, Master Chief and Cortana were adrift on a derelict ship, having just struck the final blow to bring an end to the Covenant's devastating campaign against the human race. Chief then entered cryo-sleep for the next four years, while humanity poured its energies into fortifying its defenses and expanding its galactic presence. A captivating opening cutscene shows this new initiative taking a critical look at the past, foreshadowing some interesting tension later in the game. Meanwhile, Chief and Cortana are roused when they stumble upon a dire threat to humanity's existence. This foe provides the series with its first proper villain, one whose roots in previously-vague Forerunner mythology soon come into frightening focus.

These galactic machinations are dramatic and intriguing, and they are brought to life vividly by Halo 4's stunning technical prowess. From sweeping panoramic vistas to claustrophobic jungle clearings, the environments are rich with detail enhanced by thoughtful lighting and sharp textures. The excellent artistic design that makes human, Covenant, and Forerunner architecture so instantly recognizable is on display once more, helping to create a cohesive sci-fi world. Expressive facial animations bring characters to life, imbuing the cutscenes with extra emotional weight and making the story that much more engaging. It's all tied together with an amazing soundtrack that complements every aspect of the game. Alien environments ring with eerie strains, characters' emotions are reflected in plangent chords, and the intense action is driven along by urgent orchestrations.

Yet for all the excitement and emotion of the main plot, the most engrossing drama of Halo 4 takes place between Master Chief and Cortana. Everyone's favorite artificial intelligence is nearing her expiration date, forcing these two all-but-invincible characters to face the prospect of death in a way they never have. This delicate, degenerative process is handled eloquently, and great voice acting, animation, and writing combine for some poignant moments. 343 Industries delivers a compelling narrative on both an intimate and a grand scale, with a satisfying conclusion that will make you excited for what's to come.

Halo 4 is a striking step up in storytelling for the series, but when it comes to the action, things are more familiar. Halo has always been a shooter built on clear gameplay systems that combine in complex and gratifying ways. The crafty and aggressive enemy AI squads work together, adjusting their tactics as you assault their ranks. Your four-pronged arsenal of guns, grenades, melee attacks, and armor abilities fuels a variety of different battlefield strategies. And the environments both large and small provide enough space to maneuver creatively, occasionally furnishing a vehicle or two for your driving enjoyment.

These systems are a through line in the series and they continue to hold up well in Halo 4, right down to the Covenant enemies that you fight at various points throughout the campaign (apparently not everyone knows the war is over). They still make great foes, but the new Promethean enemies offer a fresh combat challenge. Canine crawlers fire from a distance or swarm up close, while hovering watchers flit back and forth, offering maddening support to their allies. The hulking knights look fearsome and put up a mean fight, teleporting both defensively and offensively to make killing them from a distance a tricky proposition. New enemies come with new weapons too, and though these guns fit familiar niches, neat tweaks like the boltshot's shotgun-esque alternate fire and the scattershot's ricocheting bullets make them feel distinct.

As you balance aggression and restraint, you see your enemies doing the same thing, and this tactical interplay makes the core combat eminently engaging and replayable. The campaign is well paced and often challenging, and though some Forerunner areas flirt with repetition, the whole endeavor is exciting for the 8 to 10 hours it takes to finish it. Playing with up to three other players is a blast, and Halo 4's campaign thrives in cooperative play. More Spartans means more freedom for you to employ team tactics, put vehicles to good use, play around with the various game-tweaking skulls, or simply have fun horsing around.

You can also flex your cooperative muscle in a new mode called Spartan Ops. Planned as a regular series, each free, downloadable episode of Spartan Ops comes with a CG-animated short depicting life among the Spartans, as well as a number of brief playable combat scenarios. The first video features a lively cast and some enjoyably dramatic scenes, with animation quality comparable to the cutscenes from the campaign. Though the commanding officer from the video lends some voice-over supervision to the individual scenarios, the missions themselves feel fragmented and disconnected from each other. Though they can be played solo or with up to three others, these skirmishes are over in a matter of minutes, and this brevity makes them feel inconsequential and unsatisfying. Still, it's a flexible and novel way to deliver fresh postrelease content, and it will be interesting to see how the Spartan Ops story builds in the coming weeks and months.

Back on more familiar ground, War Games is the new name for the vaunted competitive multiplayer action that has been a genre standout for more than a decade. The classic deathmatch and objective-based game types return in free-for-all and team varieties, with only a few tweaks and additions. Infection has been renamed Flood, casting the "zombie" characters as Flood-mutated humans with super speed and a giant spike arm that behaves like an energy sword. Regicide is a new free-for-all game type that puts a bounty on the player with the highest score and occasionally grants him or her an overshield or other perk for remaining on top. Invasion is gone, and in its place is Dominion, a team contest focused on capturing and maintaining control of three bases. Bonuses for holding them include spawnable vehicles, automatic turrets, and weapon drops, making for some feisty back-and-forth struggles.

(An important logistical note: To play these modes, you need 2GB of storage space to install War Games, and 1.5GB per episode of Spartan Ops. It's unclear how much space Spartan Ops will demand in the future, but suffice it to say, a memory card won't cut it.)

Halo's competitive multiplayer modes have always dictated the weapons available to players in a given match, creating a level playing field from the get-go. But now, in a move reflective of modern shooter trends, Halo 4 introduces loadouts. These consist of familiar categories like primary and secondary weapons, grenades, and armor abilities, as well as two new attributes that grant small bonuses, like quicker weapon switching, bigger grenade explosions, and broader motion sensor range. You unlock extra loadout slots and the ability to equip these bonuses as you level up, and you must also pay to unlock individual loadout items with points you earn with each rank. It can feel a bit limiting at first, but regardless of your rank, there are always a few fully stocked predetermined loadouts to choose from, so you're never at a disadvantage for being low-level.

Not knowing the map is also less of a disadvantage now, because weapons spawned on the battlefield are clearly marked. Furthermore, players who do well can call in their own ordnance drop mid-match. Familiar weapons like needlers, shotguns, and swords are accessible only through such drops, as are new entries like an explosive railgun and a light machine gun. There are even boosts to shields, movement speed, and damage output. Picking one of the three random options in your personal ordnance reward is an interesting strategic decision that affects how you proceed and adds another defensive consideration for your opponents.

New abilities can help you deal with these variables; Promethean Vision lets you see your enemies' silhouettes and identify which weapons they're holding, while a hardlight shield can save you from an imminent explosion. The online battlefields of Halo 4 are more varied than their predecessors, but none of the changes or additions are powerful enough to destabilize the core balance. This plays like a richer version of the competitive Halo that many have come to love over the years, and the new tweaks add a welcome freshness to the action.

If you want to avoid or embrace any given element, you can always fire up a Custom Game and tinker with the battlefield conditions to your heart's content. Options are as robust as ever and are exponentially expandable once you dip into the still-incredibly-powerful Forge level editor. Though it can be daunting, some changes to Forge have made placing objects easier and the whole experience generally more user-friendly. Play around with friends, tweak existing levels to your liking, craft something using the new tools, or simply download the fruits of other people's labor--Forge remains an impressive platform for creative play and thoughtful design.

Halo 4 is every bit the massive shooter package that its predecessors were, and it holds the series' standard high. The thrilling and emotional return of Master Chief and Cortana is the highlight, and the campaign breaks new ground in narrative quality for the franchise. The top-notch competitive multiplayer picks up where Halo: Reach left off, infusing the action with some mainstream elements while still remaining undeniably unique. Spartan Ops may stay a mere sideshow or prove its worth in the weeks to come, but there's no doubting that the next planned Halo trilogy is off to a great start. 343 Industries should be proud of what it has accomplished, and you should be excited to experience it for yourself. 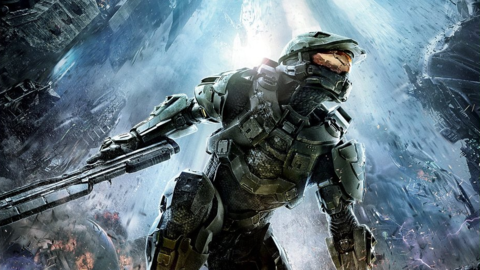 Halo 4 is the fourth installment in the Halo series where Master Chief returns to battle an ancient evil bent on vengeance and annihilation.