The bad news is that Blue Shift, the actual game, doesn't amount to much on its own terms. The good news is that the revamped graphics and inclusion of Opposing Force make the retail package a lot more worthwhile.

Half-Life: Blue Shift is the second official retail expansion to Valve Software's groundbreaking 1998 first-person shooter. It's worth noting that Half-Life's publisher, Sierra Studios, has used the Half-Life brand name on many other products, including refurbished "Platinum" and "Game of the Year" editions of the original game, and has also helped promote (and sell) fan-made Half-Life mods, including last year's Gunman Chronicles and the extremely popular multiplayer mod Counter-Strike. Blue Shift was developed by Gearbox Software, the same team that brought you the excellent 1999 Half-Life expansion, Opposing Force, in which you play as one of the commandos sent in to ventilate Gordon Freeman, the protagonist of the original game. Blue Shift itself was originally developed as supplemental content for Half-Life for the Sega Dreamcast, but unfortunately, that console was discontinued earlier this year. Thus, plans for the release of Half-Life for the Dreamcast changed, which is why Blue Shift has now been made available for the PC. In North America, Blue Shift also comes bundled with Opposing Force--and you don't need the original Half-Life to play either of these. For good measure, Blue Shift also includes the Half-Life High Definition pack, which refurbishes some of the graphics throughout Half-Life and makes the entire game look a little newer. The bad news is that Blue Shift, the actual game, doesn't amount to much on its own terms. The good news is that the revamped graphics and the inclusion of Opposing Force make the retail package a lot more worthwhile.

It takes much more effort to put Half-Life: Blue Shift into proper context with all the preceding Half-Life products than it does to actually finish the game. It's not that the game is easy so much that it's extremely short--it'll take you between four and 10 hours to see everything in Blue Shift. You are put in the role of one of Half-Life's stalwart, levelheaded security personnel, whom you'd run into from time to time in the original game, as well as in Opposing Force. Barney Calhoun, your character in Blue Shift, supposedly doesn't have the same academic background as Gordon Freeman, nor does he have the military training of Corporal Adrian Shephard, the protagonist of Opposing Force. In the context of the game, none of this really comes across--Barney runs extremely quickly (just like Gordon and Adrian) and can suffer an inordinate amount of damage (just like Gordon and Adrian). This makes sense in Half-Life, where you are protected by a state-of-the-art environment suit, as well as in Opposing Force, where you are a highly trained soldier. In Blue Shift, it's a stretch, and the only time you get the sense that you're actually supposed to be a down-to-earth security guard is in an early sequence in which you have to get your sidearm and pick up your security vest and helmet. Like in Half-Life and Opposing Force, your character never actually says a word during the course of Blue Shift. In Half-Life, this helps immerse you into the game. In Blue Shift, it's too bad, since the main appeal of Half-Life's security guards comes from their numerous, wry one-liners and other banter.

Like Opposing Force, Blue Shift takes place during the same time frame as Half-Life. You start out heading in to work just as you would any other day, but things quickly go awry in the Black Mesa Research Facility. It's suddenly under siege, and as a member of its security force, you're tasked with defending the facility's scientists from aliens and also from government soldiers, who have come to do you in. In practice, you'll traverse the same sorts of dangerous levels that are found in the original game and Opposing Force. During the course of Blue Shift, you might catch a couple of clever references to both Opposing Force and the original game. These, along with a few other in-jokes, make for the most enjoyable parts of Blue Shift. The rest of it consists of a few fairly straightforward firefights, an obligatory jaunt to Xen (Half-Life's perennial parallel universe), and several jumping puzzles that manage to be just clever enough instead of annoying. There are no new challenges to be found, it's all over very quickly, and there isn't much point in revisiting the levels.

However, you may find that once you've installed the High Definition pack, Blue Shift gives good reason to revisit the original Half-Life (as well as Opposing Force). This graphical enhancement increases the size of most of the texture maps found in the game and its expansion and also improves some of the 3D character models--you'll quickly notice that the scientists, security guards, and government soldiers all look more lifelike. The High Definition pack also changes all the weapon models from Half-Life. The most jarring of these changes is that Half-Life's terrific submachine gun has now been replaced by a full-on assault rifle that's functionally identical but looks a lot heftier and sounds even louder when it fires. Half-Life is almost three years old, so all of these graphical enhancements are helpful, though they still don't make Half-Life look like a new game--nor are many of the changes themselves very noticeable. Furthermore, these enhancements are entirely superficial--Half-Life will still play the same as before.

If you buy just one Half-Life-branded game besides Half-Life itself, then that game should be Blue Shift. You can always get Counter-Strike as a free download, and Opposing Force comes packaged with Blue Shift anyway. Don't be misled by the fact that Blue Shift doesn't require Half-Life: If for some terrible reason you don't actually have the original, then owning it should be your first priority. Besides, Blue Shift is actually best suited for those who own and enjoy the original Half-Life. These players will quickly find that Half-Life remains extremely enjoyable today and that the enhanced graphical touches in Blue Shift's High Definition pack make it fun to revisit some of the original game's incredible scenes for the umpteenth time. Otherwise, Blue Shift is a great value if you've never tried Opposing Force--an expansion pack that originally retailed for $10 more than Blue Shift's $30 retail price. However, if you've finished Opposing Force and already spent plenty of time with the original game, you'll find that Blue Shift doesn't have a lot to offer. It's much too short, and it has no multiplayer features--therefore, it won't satisfy your craving for more of the intense action that made Half-Life so remarkable. You can get a $10 rebate for Blue Shift if you've already bought Opposing Force, but that still doesn't make the underachieving Blue Shift worthwhile on its own. 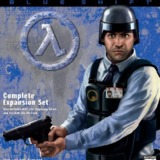