Rebirth makes some minor improvements on the familiar formula, but it's still hampered by repetitive, tedious gameplay and a story that never seems to get anywhere.

Apparently four .hack games in less than a year just wasn't enough, so Namco Bandai Games and developer CyberConnect2 are set to crank out another trilogy of .hack games for the PlayStation 2. Beginning with .hack//G.U. vol. 1//Rebirth, the new G.U. series is set in a revised version of the fictional massively multiplayer online role-playing game known as The World. Rebirth takes place after the events in the original .hack series, and although the game follows what is technically a "new" story, it feels all too familiar. The G.U. series does improve on the previous games by updating the presentation and streamlining the battle system, but that doesn't make it any easier to get excited about paying close to full price for yet another go-nowhere episode in a franchise that already feels like it's been stretched too thin.

Rebirth is a single-player, offline role-playing game that once again takes place in a game-within-the-game known as The World. The World is a futuristic massively multiplayer online role-playing game that's 12 million subscribers strong and growing. The game has been relaunched since the events of the original series, and it is now home to insidious "player killers" who terrorize low-level characters. You play the game as Haseo, a feisty rogue who just started playing The World. Soon after he begins playing, Haseo is attacked by a group of player killers. He vows to take his revenge and spends the next eight months leveling up and hunting player killers. As a result, he earns a reputation as a player-killer killer and is given the moniker Terror of Death. Eventually, Haseo encounters the ultimate player killer, Tri-Edge. This mysterious character attacks Haseo's friend Shino and puts her in a real-life coma. Tri-Edge and Haseo do battle, but Haseo loses the fight and is data drained, which takes him all the way back to level one. This is where you pick up the story, and you have to set out to find Tri-Edge and discover what exactly is going on in The World that could cause people in the real world to fall into comas. There are plenty of new characters to meet in Rebirth, and most of them are just interesting enough to make it worth listening to what they have to say. The story and premise are conceptually sound, but if you've played the previous .hack games, Rebirth will feel like well-worn territory.

In the game, you control Haseo, and your time is divided between The World and an external dashboard that lets you send and receive e-mail, watch news broadcasts, and read forums pertaining to events and rumors. You'll often have to check your email to get clues and information about where to go next. It's an awkward system because you often have to log out of the world, check your e-mail to get some new bit of information or the name of a location to visit, and then log back in to continue playing. It doesn't take long, but it's frustrating that you have to go through half a dozen extra steps when it would be much easier to simply convey the information in-game. If you do want to spend some time outside of The World, there's plenty of forum posts and movies to keep you busy, and many of them are at least slightly entertaining, if not especially informative.

The vast majority of your time will be spent playing The World, which works much like popular massively multiplayer online role-playing games like World of Warcraft and EverQuest. Player characters complete quests, battle monsters, and hunt for treasure to become stronger so they can complete more difficult quests, battle tougher monsters, and hunt for better treasure so they can...well, you get the idea. Rebirth does a decent job of making The World feel like a real MMORPG. You can trade items with any character you encounter, form guilds, join a party to complete quests, and so on. Unfortunately, The World sticks perhaps too close to MMORPG design conventions and becomes tiresome as you complete the same quests, kill the same monsters, and explore the same dungeons in a monotonous cycle.

But even though the game feels like it doesn't go anywhere, it remains very linear. You'll almost always be told exactly what you need to do next, which usually involves clearing a random dungeon or talking to a specific character. There are side quests that you can accept if you want to gain more experience or find more items, but the quests aren't interesting or particularly challenging. Once you complete specific tasks, you'll get to watch a usually very lengthy cutscene full of tense, melodramatic dialogue. In fact, for the first several hours, you'll watch this game far more than you'll actually play it. But for all that exposition, the story never progresses and the plodding pace will repeatedly try your patience.

In between all those cutscenes, you'll spend a lot of time fighting. The combat system has been modified since the previous .hack games, and the result is a more streamlined method of dispatching foes. When you're in a dungeon, you'll encounter groups of enemies. When you are attacked or initiate an attack by getting close enough to the enemies, a battle barrier will be activated to contain the combat. Even though the combat is contained within these force fields, the area is fairly large and you can run around as you please. You can attack enemies by mashing the X button to perform simple combos, and you can block with the circle button (though that's rarely necessary). You can also learn skills, which can be assigned to a "skill trigger." The skill trigger is activated with the R1 button, and you can then press the corresponding face button to use a skill. This lets you battle it out without having to sift through menus because you can easily use your skills with a couple of quick button presses. You can only use the skill trigger for physical attack skills, though, so if you want to cast spells, you still have to open up a menu and select your spell.

In addition to skill attacks and melee combos, you can perform special "rengeki" attacks, as well as team attacks known as awakenings. To perform a rengeki, you have to attack an enemy until it becomes vulnerable, and then you can simply perform any skill attack for increased damage. The awakenings are team attacks that require you to fill up a morale gauge by fighting alongside party members. When activated, these awakenings give you a momentary boost. The beast awakening makes your characters faster and stronger, and the demon awakening lets you use powerful magic attacks by hammering on the X button.

You can take up to three characters into battle, although you'll only ever control Haseo. The other characters in your party are controlled by the game's artificial intelligence, which can be adjusted to determine how each character will behave and what actions will get priority. For the most part, the artificial intelligence works well enough that you won't have to think about it. Your healers will stay back and keep you appropriately healthy, and your fighters will hold their own on the front lines. The battle system is simple and easy to pick up, but it's completely mindless and the challenge isn't derived from the behavior of the enemies; rather, it's by how many hit points they have. Higher-level enemies will absorb a ton of damage, but that doesn't make it harder to kill them--it just makes battles last a lot longer.

There is a temporary reprieve from the mindless battles in the form of avatar battles. Avatars are special creatures that only a few select characters can summon. When you're in an avatar battle you have a ranged attack, a slash attack, and a dash. Using these moves you have to deplete your opponent's energy gauge, at which point you can finish the enemy avatar off by performing a data drain. These one-on-one battles are slightly more interesting than the regular battles, but they too get old fairly quickly.

The presentation in Rebirth is much improved over its predecessors. The colorful characters have a distinct style, although they all conform to typical anime archetypes. The World feels darker and more sinister than in previous games, although not to the extent that it's depressing or dismal. Some of the cutscenes feature some great-looking action sequences and even a few humorous character interactions, which makes these noninteractive sequences a bit more palatable. The environments look good at first, but you'll see the same exact dungeon dozens of times and it quickly becomes stale. The battle effects are flashy and dramatic, which makes them fun to watch. However, when there are six characters running around and attacking wildly, it's easy to get disoriented. The frame rate also tends to take a hit in these situations, which can be annoying. The sound in the game is mostly good. There's a ton of fully voiced dialogue in the game. It's the usual overly dramatic shouting that you'll find in a lot of anime--most of the voices fit well with the characters and the dialogue. The subdued music doesn't stand out either way; it's not catchy, but it isn't grating or repetitive, either.

Don't be mislead by the subtitle of this game. Instead of a rebirth, this feels like more of a repackaging of old ideas. The game does a good job of developing the world of .hack by introducing some likable characters and padding it out with interesting, if ancillary touches, but all of the development and detail doesn't add up to any sort of appreciable story. And without a sense of progression, it's difficult to stick with this game for the entire 25-or-so hours it will take to get to the end, especially when you already know that the end of this installment won't actually resolve anything. The structure and pacing of the game are tedious and slow, and the battle system is too simple and repetitive to keep you entertained while you wait for something to happen. 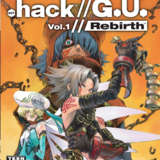 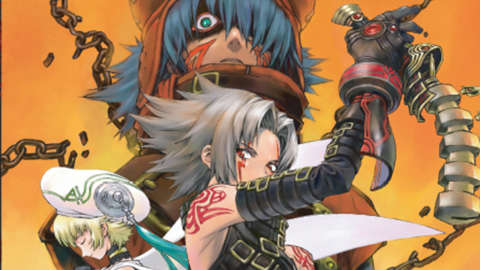 The next installment in the Bandai's .hack series, .hack//G.U., arrives on the PlayStation 2, complete with new characters and an original storyline.