It can be risky business lifting inspiration wholesale from the work of others. After all, someone might actually notice. So when giant diamond-eyed purple monsters and heart-container-containing life gems start to pop up in Gurumin: A Monstrous Adventure, it might just give you pause as images of the work of Hayao Miyazaki (Spirited Away, My Neighbor Totoro) and Shigeru Miyamoto (Legend of Zelda, Super Mario Bros.) flit past your eyes. As brazen as it may seem to liberally sample two of the most noteworthy luminaries in their respective fields, Falcom's newest action role-playing game does just that. While it lacks the artistic creativity of the former and the deep gameplay of the latter, it mostly captures each one's charm all the same. And Gurumin's enjoyably complex combat mechanics, likable characters, and standout musical score do go a long way in ameliorating any similarities to other great properties that might crop up.

Gurumin tells the story of a young girl named Parin who is sent to live with her grandpa while her adventurer parents go off to have fun without her. With her world-wise outlook and street-smart attitude, Parin is the kind of immediately likable protagonist that you'll have no problem latching on to. Her grandpa is the mayor of a small mining community, and, quite mysteriously, she is the only child in town. You'll quickly acquaint yourself with the locals, from the motherly Pamela to the pervy Cylinder, and just when you've resigned yourself to a summer of boredom, you happen across Pico, a young female monster. Apparently, a small monster community exists in an alternate dimension just next door to the village, of which the grown-ups of the town have been unaware. Because Parin is the adventure-seeking type, she immediately follows Pico, and Pico's brother Puku, through a hole in one of the buildings to the monster's village. Upon their arrival, the village is summarily decimated by a marauding band of phantoms, which causes all of the unhappy monsters to emit a dark mist over their world. Only by lifting the materialistically oriented spirits of the monsters by lugging pillaged dinette sets, coffee tables, and boom boxes back to town can the fog be dissipated, and you'll commence to do so not unlike rebuilding, say, a triforce. To aid your quest, you extract a mystical drill from the center of the village in a sword-in-the-stone moment and then set out on an adventure to thwart the phantom prince and save the monsters' world.

The story's well-written exchanges make it entertaining, but what really brings the adventure to life is the game's outstanding audio. Pico and the prince aside, the actors who voice the various characters do a great job of evoking their characters and bring a lot of personality to the game. The incidental sound effects are also done quite well; for instance, the drill makes a satisfying clang as you attack enemies, and Parin shouts as menacingly as an edgy little girl can. In addition, Gurumin features a well-composed and varied soundtrack that would be worth listening to on its own merits. The game also features creative character designs that are interesting to look at regardless of the source of their inspiration. It's unfortunate that the same creativity wasn't extended to the background environments--most lack detail, and much of the vegetation has a very flat, almost 2D look. The game animates well, and the subdued particle effects look great flying off your drill. There are also noticeable loading times, but these are only an issue during the too-frequent backtracking you'll have to do.

Backtracking and occasionally obscure plot-advancement keys were a real bummer in Falcom's other recent RPG forays, so it's a bit of a mystery that it didn't learn its lesson from those games and find a more natural way to advance the story here. In light of these tired-out conventions to extend gameplay, it's a bit of a surprise that the developer absolutely nailed incorporating minigames into the story. There aren't many of them, but the minigames you do come up against are both fun and addictive, and more importantly, their presence doesn't feel forced or arbitrary.

The RPG elements in Gurumin aren't exactly groundbreaking, but they're very accessible. In addition to the standard health and energy-restoring items, you'll be able to stock your inventory with headgear that's both fashionable and functional. You'll start off with goggles that reduce damage taken by water (that notorious video-game-character killer), but by busting up enemies and jars in the stages to collect tokens, you'll be able to purchase several other pieces. These include a cute bandanna that somehow increases attack damage and a not-so-cute monkey headdress that leverages more tokens out of everything you drill to pieces. Headgear can be upgraded several times by giving your junk to Dink, the bespectacled local craftsman. Junk is acquired from trash cans dispersed throughout the levels, as well as from a good deal of the enemies. Because all the headgear is unique and you're able to switch them up on the fly, you'll find yourself cycling through your choices at various points in the game--nothing gets permanently shelved after you get something new.

The only other bit of inventory management you'll need to contend with is the several elemental parts you'll acquire during your adventure. Most of the enemies you'll encounter don't seem to be too affected if you equip a different elemental modifier, so these are more for solving environmental puzzles. The feature seems a bit tacked on, because it doesn't add any significant improvements to the gameplay and most of the puzzles that the elemental modifiers factor into aren't much of a challenge.

What Gurumin does surprisingly well, and certainly much better than most RPGs, action or otherwise, is it maintains your interest in combat. Instead of going the button-mashing route with a few boring combo attacks, special attacks here involve combining a 360-degree motion on the D pad or analog stick with the dash, melee, or jump button, or a combination of any two. It might sound daunting, but the circular motion is forgiving enough that it'll quickly become second nature to execute any of the special attacks at will. It also helps that instead of encountering hordes of weak enemies, you'll come up against armored and evasive enemies, which means you'll have to chain together your special attacks for maximum effectiveness. Most of these special drill attacks have a point-blank area of effect, so aiming isn't an issue, though you can lock onto a target by holding down both shoulder buttons for those few instances when you want to keep a certain enemy in your sights.

As nice as they are, the combat mechanics do have a few issues. For one, when doing the circular motion you'll occasionally perform an unintentional and inopportune attack. It can also be annoying when you accidentally transform into a twirling ball of death when you just want to run up to a monster and return a stolen rubber ducky, for example. Though, to their credit, accosted friendlies will applaud your efforts with a "Wow!" or "Cool!" instead of pleading for their lives as you might expect. Also, because of the temporary invulnerability granted by one of the projectile attacks, you'll probably find yourself falling back on it for all the boss fights, but at least the other attacks will get plenty of play as you make your way through the stages. And in yet another Zelda-inspired moment, your drill mysteriously gains a projectile effect when your energy bar is fully charged.

Once you've fully stomped your way through the game, you'll unlock several extra difficulty settings. Beginner and normal difficulties are available initially, and normal is definitely not lacking in challenge and will easily take 12 to 15 hours to complete. Plus, full completion isn't just a matter of getting from the beginning to the end of each level. You're graded on a lettered scale, with the criteria including enemies killed, jars smashed, game overs, and time spent, and you'll need to get an S rank on each stage to fully master it. The extra difficulty levels, then, seem mostly superfluous, but you will come across more unlockables as you work through them, and Gurumin is enjoyable enough that some people could conceivably want to play the game over. In addition, you'll be able to retain a lot of your gear from the first time around, so it isn't as if you'll have to start completely over.

Gurumin is a great game, even when its less-than-original elements crop up. This is thanks in no small part to its engaging combat mechanics, pleasing soundtrack, and likable characters. By simplifying the game's RPG elements and keeping special attacks and equipment relevant, as well as seamlessly incorporating some really fun minigames, Falcom shows it's got a few things of its own to bring to the table. 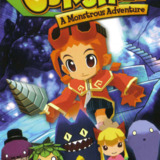