Guitar Hero plays fantastically, it has great music, and, for a change, it's a rhythm game that's accessible to beginners.

And here you thought that the rhythm game genre was getting stale. While Konami still has a firm lock on most rhythm-oriented games, another company called Harmonix has also released its share of interesting rhythm games--Frequency and Amplitude--both for the PlayStation 2. Plus, Harmonix and Konami have teamed up in the past on the Karaoke Revolution series. Now, the Cambridge-based developer is taking a similar approach to the world of guitar rock with Red Octane's Guitar Hero. With its extremely smart approach to difficulty, its great guitar controller, and its killer song selection, Guitar Hero might just be the best rhythm game ever made.

Guitar Hero is played with a special guitar-shaped controller that has five buttons up on the neck, with one on each of the first five frets. Instead of strings to pluck, a small, clicky flipper is on the body of the guitar. And, just for kicks, it's got a whammy bar. The guitar feels pretty solid and generally well-made. The game screen consists of a scrolling fret board that has various colored notes on it. Each color corresponds to one of the buttons on the guitar, which you must hold down while strumming on the flipper. Some notes have lines attached to them, implying that you should hold down that note for a longer period of time, similar to the freeze arrows found in Dance Dance Revolution. Technically, you could play Guitar Hero on a standard PS2 controller, if you wanted to, but it's not nearly as interesting without the guitar. Also worth noting, the guitar isn't compatible with Konami's Guitar Freaks games, so if you're looking to replace your increasingly rare and somewhat flimsy Konami guitars, you're out of luck.

Unlike most rhythm games, Guitar Hero has a career mode that sort of dictates how you should proceed through the five difficulty settings. This is probably the smartest part of the entire game. Anyone jumping into even the medium difficulty setting without a decent amount of experience isn't likely to get very far. But starting on easy, which only uses three of the five buttons, is a great way to get used to playing the game. Also, you'll be playing easier songs when you first start, and you'll work your way through multiple brackets of tracks as you play. Medium difficulty steps things up by only occasionally working in the fourth button. Eventually, you'll start using that fourth button more and more as you move down the song list. Hard difficulty does the same thing with the fifth button, giving you time to get used to pressing it with your pinky, which, let's face it, isn't normally much of a gaming finger. By the time you hit expert, you'll be ready to slide up and down the neck of the guitar to hit all five of the buttons. But it doesn't mean that you'll cruise right through the level, either. Expert gets extremely difficult, especially when it comes time to play the songs' solos. But if you've worked your way through the other difficulties, you'll probably enjoy the steadily increasing challenge.

Aside from the career mode, you can also enter quick play, which lets you play any of the tunes you've unlocked in the career at any of the five difficulties. High scores are tracked in this mode, which is great, but you can't select your player and guitar, which reduces their importance a bit. You can, however, choose your player and your guitar in the multiplayer mode, which lets two players go at it. Unfortunately, it doesn't look like guitars are being sold separately at the moment, so you'll have to either buy two bundle packages or, if you don't want to wait for guitars to go on sale later this year, hope someone in your area also picks up the game. It's a shame that this isn't more readily available right out of the gate, since the multiplayer mode is one of the game's greatest assets. The songs are divided between the two players really well, and you'll trade off solos and such as you play.

In addition to these modes, there's also a very brief tutorial that shows you the basics of the game, including how to use star power. Star power is earned by playing star-shaped notes that come along every so often during the course of a song. If you nail enough of them, a star power meter fills up. Once it gets around halfway full, you can activate star power by tilting the guitar upright. This causes the notes to light up and doubles your scoring multiplier. Since missing a bunch of notes drains your on-screen rock meter and ends your game, star power is also handy in the harder songs, since the notes that are hit in star power mode rapidly sway the meter, which determines how well you're doing overall. The addition of star power gives the game a bit of a strategic element that most rhythm games lack. Now, you not only have to hit all the notes to keep your combo going, but you also want to make sure you activate star power just before a heavy section so you can make the most of its score-increasing effects.

You'll also probably enjoy the song selection. The recognizable hits among the licensed tracks are all cover songs, not the original versions. But the attention to detail in these covers really shines through, especially when it comes to the meticulously re-created guitar parts. While the game is certainly heavy on older rock and metal tunes, it really seems to be biased in favor of catchy and memorable guitar riffs. So you'll get great versions of Ozzy Osbourne's "Bark at the Moon" and Judas Priest's "You've Got Another Thing Comin'," but you'll also get some newer tracks, like Sum 41's "Fat Lip" and Franz Ferdinand's "Take Me Out." Unless you're very, very anti-guitar in your musical tastes, you'll definitely enjoy playing most of these songs, whether you like the original versions or not. There are 30 songs in career mode, plus another batch of unlockable tunes from the developer's various bands and, of course, synth-pop darlings Freezepop, who somehow seems to turn up in every single Harmonix game.

Most rhythm games aren't much to look at, which is fine, since you won't have much time to enjoy the scenery while keeping your eyes on the gameplay portion of the screen. While you'll still stay focused on which notes you need to hit, observers will get treated to a good variety of rocking environments, from a basement party to an arena rock show, complete with a giant Viking. As we all know how important Vikings are to the history of rock, suffice it to say that this is a great-looking game. The different characters are animated well, though you'll see a few animations that are shared by multiple characters. The rest of the band doesn't get too much screen time, but they also look really sharp.

Aside from the great cover versions contained in the game, the rest of the sound effects also contribute to the overall atmosphere. Prior to songs, you'll hear crowd noise, and when you're doing well, the crowd will clap along. Entering star mode puts a louder effect on your guitar, which is pretty cool. And when you miss notes, you'll hear realistic-sounding fret noise. You can adjust each of the game's sound levels individually, if you like. By default, everything is turned up to 11, Spinal Tap-style, and the guitar is mixed higher than the rest of the song. In some two-player settings, the louder guitars tend to drown out the rest of the song. About the only negative thing you could say about the sound is that if you miss a held note, you'll sometimes hear that note start to ring (still ringing from when you were supposed to hit it) when you play the next note properly. This is minor and awfully esoteric, but it can also make you feel like you're playing a phrase simply to let someone else's guitar work play, rather than feeling like you're playing it yourself.

Guitar Hero may be simple in design, but between its terrific sense of atmosphere, the amazing song selection, fantastic cover versions, and absolutely wicked gameplay, it's one of the most complete packages that the genre has ever seen. It's fun to play alone, but even better in groups. If you've ever been interested in the rhythm genre, this is the game to buy. 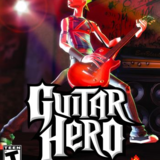 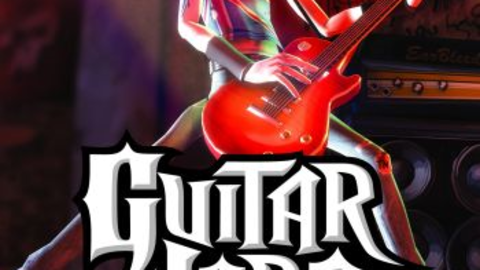 Be a lead guitarist who plays for thousands of people in the unique rhythm game Guitar Hero. The game comes with a guitar-shaped controller.