Grid is a classy arcade racing game, providing enough depth and variety to satisfy any fan of the genre.

Codemasters' Race Driver series has long put the emphasis on making the driver, not the cars, the stars of the show. Grid is the spiritual successor to this series, and though it still offers you the chance to travel the world as a racing driver, the emphasis is firmly back on the racing itself. Taking in a wide range of international venues and racing disciplines, Grid's career mode puts you in the shoes of a top racing driver. You'll freelance as a driver for other teams, form your own team, and negotiate sponsorship contracts so you can buy new vehicles. In addition, Grid has a highly accessible 12-player online mode, a new flashback feature to rewind the action after devastating crashes or costly mistakes, and a novel approach to trading vehicles. It may lack basic features such as adjustable weather and split-screen multiplayer, but Grid still has enough fresh ideas to make it a notable entry in the racing genre.

Grid splits its racing between three geographical locations, with Europe, the US, and Japan each presenting an assortment of racing styles. Europe features track-based racing, with famous locations such as the Nurburgring, Donington Park, and Le Mans on its roster. Europe also boasts a city track in Milan, but it's the US that is more focused on street racing with courses in Washington, San Francisco, Detroit, and more. Japan is clearly influenced by underground street racing and has short, winding tracks that are perfect for drifting around. Each of these locations demands different vehicles; Europe features touring and GT cars, the US has muscle cars such as Vipers and Mustangs, and in Japan you get to drive tricked-out Nissans and Subarus.

The main aim of the Grid World mode is to increase your reputation as a driver and earn money to buy new vehicles. You'll be paid for winning races, playing at harder difficulty levels, earning sponsor bonuses and being part of a winning team. As with many racing games, you need a selection of vehicle types to enter different racing events, and you can buy cars either brand-new or secondhand on eBay Motors. It's a rare example of in-game advertising done right: Some pre-owned motors run the risk of being too banged up, whereas others have proved themselves capable of winning races previously. One thing that Grid doesn't focus on is upgrading vehicle components; instead of buying new engines, you just sell your old banger and buy something better.

The simple upgrade system and accessible racing style mean that Grid is more of an arcade-style racing game than a sim. That said, the game is still challenging, and the believable AI opponents will happily smash you into walls. In a nod to realism, head-on collisions will often take you out of a race completely, though one of Grid's new features offers you a way back in. The flashback system, which can be selected from the pause menu, lets you rewind time and resume gameplay at a point before the mistake was made. Your chosen difficulty level determines the number of flashbacks at your disposal, and there's a cash incentive at the end of each race for not using the feature. Racing purists may baulk at the concept, but it's completely up to you whether you choose to use flashbacks in the game. In situations when you'd previously have to restart the entire race, you now have a second chance to try a corner, and the decision adds an interesting gambling element to the game--should you use your last flashback now, or save it for the final lap? Grid also provides concessions for hardcore players who want to make the game harder, with a pro mode that restricts you from restarting a race at all. Enabling the pro mode changes your entire approach for each race, given that every lap becomes a do-or-die test of nerves.

Grid's controls feel light, responsive, and even quite forgiving, but the damage model and challenging AI can make for a difficult first few races. Minor bumps and crashes will do little to impact the performance of your vehicle; bumpers will fall off and windscreens will shatter, but the innards of your car will perform as normal. However, major incidents will have a more drastic effect on your ability to race. Your vehicle might pull to one side or lose speed and acceleration, or even worse, it could fail completely.

Once you're aware of these dangers, Grid becomes an enjoyably edge-of-your-seat racing experience. With the traction, braking, and stability assistance enabled, the game lets you perform some extraordinary braking manoeuvres, but you still need to be careful. While there's no option to have a racing line drawn on the track, a red light next to the map advises you of when to brake for corners. But Grid's greatest achievement is the driver AI, which does a fantastic job of replicating the behaviour of competitive and somewhat accident prone race drivers. Grid's drivers move in a choreographed formation at the beginning of each race, but they begin to take risks and make mistakes as they try to get to the front of the pack. You'll frequently find yourself misjudging a corner and spinning out, only to see a pack of rivals pile up the next corner down. There are also distinct racing styles between teams and drivers; race leaders will guard their position closely, whereas those at the back will cautiously slow down and go around you if you spin out in front of them. Whichever difficulty level you choose to play at, they're a clever and challenging bunch to race against.

Grid offers a huge number of different racing disciplines to try, from standard GT and pro-tuned races to drift competitions around winding Japanese circuits. There's even a demolition derby, with a track that has two crossovers where airborne cars can smash into each other at right angles. Each season of the Grid World mode ends with a Le Mans 24 Hour Race, and though it's normally condensed into a 24-minute period, it feels only slightly less demanding than the real thing. Caffeine-addled players can choose to follow it in real time by setting up a full 24-hour race outside of the career mode, but you still get to see the full day and night cycle whatever period of time you choose.

For multiplayer racing, Grid offers support for up to 12 players connected via PlayStation Network or a local area network. All of the racing events from the single-player game can be played online, including demolition derbies and Le Mans, but the game modes are fairly limited, with only ranked, player, or private matches to select. If you're creating a private match, you get complete control over the race types, race length, and damage options, but in the ranked and player matches these are voted for by all of the players in the lobby. It's good that vehicle options tend to be limited to one or two different models in each race because it makes Grid a fair and balanced racing game to play online, but it would benefit from a few additional modes and features. For example, there are no team-based races, you can't save replays, and there are no online TV channels to watch live races from around the world. The lack of split-screen multiplayer also comes as a blow, especially if you're not in a position to play online or link systems.

The new version of Codemasters' Neon engine, named Ego, imbues Grid with some particularly impressive visuals. The backgrounds aren't always sharp, but the action moves at such a frightening pace that you'll rarely have a chance to notice. There are some nice stylistic touches, such as camera tilt as you take corners at speed, and the interior camera offers a spectacular view of the car you're driving. On the technical side, Grid runs at a solid 30 frames per second with no slowdown during pileups. The one notably absent feature is weather effects, given that the game features nothing other than warm, sunny conditions in which to race. The Le Mans track may feature 24-hour day-and-night rotation, but the lack of rain or even day/night options for single races is a large omission.

Grid's presentation is similar to Dirt's, and that's certainly no bad thing. Menus are laid out simply and are easy to navigate, and the game throws up plenty of hints if you're not doing something correctly. You're frequently reminded to apply sponsor logos to your vehicles, play at a higher difficulty if you're constantly winning, and an intercom system is used to remind you of objectives during the race. The latter feature can actually become quite annoying if you're trying to concentrate on a difficult race, but voices can be turned off in the menu system if you find that you don't need them. As well as gorgeous in-game graphics, the stylish presentation of the menu system is enough to make you stop and admire it every once in a while. From the teammates who circle your garage to the statistical updates in the loading screens, this is a game that's blessed with incredible attention to detail.

One area that Grid falls down on is its audio. Engine noises don't always sound as meaty as they should, especially when you're using the in-car view, and some of the cars' engines are difficult to distinguish from one another. Musically, there's a superb intro theme courtesy of UNKLE, but the music in the menus is bland, and the few in-game tracks add little to the atmosphere. The Xbox 360 lets you play your own music over the top, of course, but Grid would benefit from a more exciting and memorable soundtrack to add to the thrill of high-speed racing.

As both an extension and a rewrite of the Race Driver series, Grid is certainly a successful progression of Codemasters' art. It may not feature the customisation of Forza 2, and it doesn't have the diversity of online modes found in Project Gotham Racing 4. But as an alternative to arcade racers such as Need for Speed and Juiced, Grid is an accessible and rewarding first step in what we hope will be an ongoing franchise. 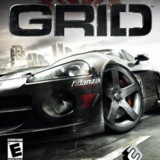