Sharp controls and smooth physics create a great blend of challenge and fun in this retro-styled arcade game.

Desolate planets in the deep reaches of space were one of the first frontiers explored by early arcade games. Their monochrome landscapes were created with jagged lines and only a handful of objects, yet this simplicity gave rise to some of the most addictive and entertaining games of the era. Gravity Crash is a modern throwback, and though this means its scope is quite limited, it accomplishes its goals very well. Similar to its progenitors, Gravity Crash features 2D levels sketched in simple lines and a humble ship with basic abilities. Stylish design touches and clever use of gravity make this neon landscape feel strikingly modern, though the look can grow repetitive as the game progresses. Whether you are simply having fun or striving for high scores, the controls offer a finely tuned degree of precision that makes piloting your ship a blast. There are a few perfunctory multiplayer modes, but Gravity Crash earns its longevity from the easy-to-use level creator and the ability to share levels online. Casual spacefarers, intrepid score seekers, and creative world shapers will all find something to enjoy in this entertaining and affordable arcade shooter.

The fundamental activity you have to master in Gravity Crash is navigation. Your tiny little ship is equipped with a shield, a thruster, a blaster, and a special weapon. How you navigate depends on your control preference. Classic controls use the left-analog stick for steering and assign shooting and thrusting to buttons. Dual-stick controls rely on the left-analog stick for steering and thrusting, which leaves aiming and shooting to the right-analog stick. Classic allows you to shoot faster, but you can only fire in the direction your ship is pointing. The dual stick's independent aiming is an improvement, and analog-stick thrusters make it easier to get the feel for subtle navigation changes. While the dual-stick controls feel a bit better, it's ultimately just a matter of preference because both schemes are equally sharp and responsive.

Getting the hang of the controls is easy, but don't expect to be flying around unhindered just because Gravity Crash is set somewhere out in space. Every level takes place on a planet, and planets have gravity. Your ship is constantly pulled down, and you have to compensate for this pull with every maneuver. You can accelerate pretty quickly from a stationary position, but if you've got some momentum going one way, turning the other way is going to take some effort and, more crucially, some time. Careening around the level at high speeds is a good way to bump into walls and deplete your shields, so you have to get a feel for the power of your thrusters and how much inertia your ship has at any given moment. Many levels require you to go underwater where changing speeds take more thruster power and you are constantly floating toward the surface. In later levels, strange energy fields and enemy structures spice up the gravitational mix even further. Gravity Crash's physics are exceeding well implemented, and once you get a feel for gravity, buoyancy, and inertia, movement becomes really enjoyable. Whether you're cautiously navigating a tight, winding tunnel or confidently hurtling through areas you've traversed before, flying your craft feels natural in a way that only responsive controls and finely tuned physics can offer.

Of course, all this flying about is not without its risks. If you fly too long without refueling, your craft becomes helpless. Shooting yellow crystals that grow on the walls will yield small shards of energy that refuel your ship. If you shoot them enough times in a row, they'll disappear, but if you stop short of destroying them, they'll regrow and remain a viable fuel source (a subtle ecological message, perhaps?). These yellow crystals will also replenish your shield if you have chosen automatic shield mode (shields activate whenever needed). If you choose manual shield mode, your shields will regenerate automatically, though you have to hold a button to activate them. A shieldless ship will explode in one hit, making manual shield mode more exacting and punishing than automatic. However, speedy level times are much easier to accomplish if you don't have to stop to replenish your shields as often.

But speed isn't the key to victory in Gravity Crash; it's just a good way to boost your score. Each level has some simple objectives (collect gems, destroy enemy structures, or defeat a boss), and completing them will open up a wormhole that ends the level. You can quickly complete the objectives and zip to the exit in hopes of beating the recommended time and getting a point bonus, but there are plenty of distractions to keep you busy that confer point bonuses of their own. Each level contains a plethora of gems, as well as a few hidden bonuses that are fun to seek out. You may also encounter friendly survivors, and if you land your craft next to them (an enjoyably tricky task), you can whisk them away to safety. And, of course, there are a wide variety of enemies that will try to kill you.

Wall-mounted turrets and missile launchers will be your most common threat, but mobile ships, astronauts with jetpacks, and even floating alien beings will give you no end of trouble. You can blast your way through all of them (with the help of a power-up, if you're lucky), but then, there are also environmental obstacles to consider. Rotating wheels and spongiform aliens obstruct passageways, while meteors, volcanoes, and lava pools present their own sorts of danger. Gravity Crash features some hostile worlds, but none of them are soul-crushingly hard. You may have to continue and forfeit your score, but if you're not concerned with making the online leaderboards, Gravity Crash offers a healthy, yet attainable challenge. If you are aiming for a high score, good luck. You're gonna need it.

For all the entertaining action that the single-player campaign offers, Gravity Crash also features some local multiplayer modes for up to four pilots. Deathmatch is fairly shallow, but Salvage and Race better capture the enjoyment of collecting and navigating. The real bonus lies in the user-created levels you can quickly download and play. You can search for an individual person's level, or just comb through the highest rated or most recent uploads. There are some pretty clever levels out there, and if you've got a halfway decent idea, you should really give the level creator a try for yourself. Though it takes some figuring out (the included instructions aren't as helpful as an animated tutorial could have been), it's not hard to grasp. Once you get the hang of it, it's easy and enjoyable to continue improving upon and refining your idea.

The only real knocks against Gravity Crash are that its scope is fairly limited and it can grow repetitive. Though the neon environments are pleasing to fly through and the bouncing techno music sets an enjoyable mood, both wear thin after a time. And while the action is finely tuned and satisfying, it also gets tiresome. These flaws are inherent in a relatively simple arcade game, and it is to Gravity Crash's credit that it staves them off for so long. The majority of your experience with this game will be fun and rewarding. Flying feels great, levels are cleverly designed, and longevity can be found in the level creation tools. For a mere $9.99, Gravity Crash combines the simplistic, addictive appeal of its ancestors with modern visuals and controls to make a very entertaining blast from the past. 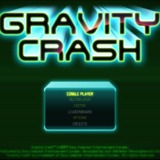 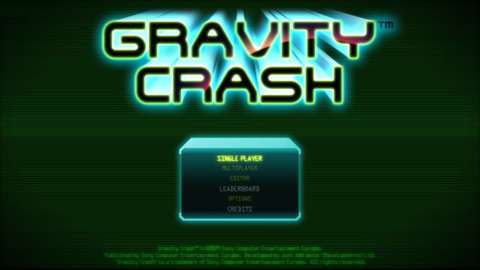