This hack-and-slash action/role-playing game is pleasant, but it just doesn't live up to its ambition and ends up feeling small and empty.

You know you've got it bad when you need to cut chunks off your home to slow it from sinking into the sea. That's the predicament facing Eon, the hero of Granstream Saga, whom you must help discover a means to save his floating homeland and its neighboring continents from a deadly descent into the ocean far below. But good graphics and an intriguing premise aren't quite enough to make Granstream Saga succeed. This hack-and-slash action/role-playing game is pleasant, but it just doesn't live up to its ambition and ends up feeling small and empty.

Granstream Saga looks fantastic at first: The fully polygonal environments are colorful and detailed, the frame rate is smooth, and brilliant special effects light up the screen. But further inspection reveals an inconsistency in the game's appearance. The slick frame rate bogs drastically at times and comes at the cost of texture mapping, as the characters you'll meet are all faceless and plain looking. Otherwise, the animation in the game runs from plain to bad, and the overhead perspective is very close to the player character, such that things can start to feel claustrophobic since you see so little onscreen at any given time. Yet altogether, Granstream Saga is one of the better-looking PlayStation RPGs in recent memory, especially when you consider its frequent use of high-quality full-motion anime cutscenes, which move the story along during key plot points.

There isn't much sound to speak of in the game, and what little exists is appropriate but forgettable. You hear speech only during the cutscenes, and it's about as good as you can expect from English-dubbed anime. The soundtrack, meanwhile, consists of booming and resonant fantasy themes that correspond perfectly to whichever setting you may find yourself exploring. It's not the most memorable soundtrack you'll ever hear, but the music in Granstream Saga is perhaps its most impressive aesthetic achievement.

Apparently, the designers sought to take a number of familiar gameplay elements and modify them such that the result feels familiar, yet uniquely different in most respects. It casts many conventional (read: cliche) plot elements aside and offers a rather compelling and unique story that progresses in a less than predictable manner. Unfortunately, it's not quite as daring an achievement as it might have been. Between the typical hero, who looks ripped right out of Falcom's classic Ys series, and his potential love interests whom you'll spot a mile away, the game may end up feeling a little too typical for role-playing veterans.

Of course, the plot is only half the story with Granstream Saga; you'll have to battle a great deal before you complete the game. You'll usually spot your enemies wandering around the various locations you'll visit. You can sneak around them occasionally, but if they chase you down, you'll find yourself wielding a blade and shield in a one-on-one fight to the death. Battles look pretty exciting at first; you can block, attack, and maneuver around quickly and precisely, as though you were playing a top-notch action game. But unlike a top-notch action game, Granstream Saga leaves you with few fighting options. What you need to do is ride the block button, waiting for the enemy's inevitable attack. After you deflect it, you counter with your own. Soon enough, the fighting in Granstream Saga starts to feel like following directions rather than anything creative and spontaneous. Sure, the enemy will occasionally deliver a slow yet indefensible attack, and you'll gather a few magic spells and special moves, but the action-based combat never quite satisfies. Worse still, certain enemies are difficult and time-consuming to defeat, such that the game might alienate the more pensive role-playing gamer. At the same time, those with well-honed reflexes will find the combat repetitive. It doesn't help that enemies reappear each time you enter an area.

Granstream Saga, at its core, is your typical Zelda-style RPG, focusing on combat, puzzle solving, and story elements rather than inventory management, shopping, and other minutiae. Add to that the low-hanging camera, and you get a game that feels insignificant and hardly as epic as its story suggests. Still, it's a solid game that will soothe the hard-core role-playing gamer's endless craving, but better alternatives exist for the more casual player. 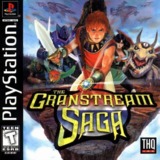