Grandia III isn't quite as long-lived as other games in its genre, but a lively cast and great gameplay help this RPG hold up well.

It's been a long wait between Grandia titles, but the latest in Game Arts' fan-favorite RPG series has finally arrived. The good news is that Grandia III retains the great gameplay that's been a hallmark of these games, with a fun and dynamic battle system that makes every encounter strategic and fresh. The bad news is that the story's a bit uninspired, and the game itself doesn't last very long. Despite that, the experience is still sustained well by its character interactions and enjoyable combat, and it's a nice option for role-playing fans looking for something unique.

Young Yuki is a boy thoroughly wrapped up in his dreams of becoming a great pilot, soaring the open skies just like his idol, the dashing Sky Captain Schmidt. It's taken him a number of different models and lots of tinkering, but he's finally settled on an airplane design that he's sure will carry him off his native Titalos Island and into adventure on the mainland. When he tries to leave, he runs into two problems--for one, his devious mother, Miranda, stowed herself away on his plane, pushing it over the ideal weight limit. For another, he happens to fly over an elf-eared young lady being pursued by mysterious assailants. He can't just leave the poor damsel in distress; and besides, his overburdened plane crashes anyway. The girl is Alfina, the last member of the Communicator bloodline. Communicators are those individuals gifted with the ability to receive the words of the mighty Guardian Gryph and relay them to the people of the world. As it turns out, Alfina's older brother is a bit of a troublemaker, and instead of assuming his place as Communicator, he'd rather try to murder the Guardians and take over the world. This just won't do, of course, and Yuki and company move to stop him, earning some extra comrades along the way.

There's not a great deal of exposition into the background of the various characters, only a number of disjointed allusions for you to put together about their varied pasts and their motivations. They're pretty chatty with each other, though, and by the end you develop a good sense of their personalities and an affection for them. There's a fair amount of speech going on, and while it's decently delivered, some of the script is just awfully hokey. There's a lot of discussion about dreams and freedom that sounds like it's being read from an RPG self-help seminar. There's a good amount of other interaction to help balance that out somewhat, though, including lengthy discussions over meals and some battle interactions.

The battle system itself is very similar to that in previous Grandia games, and the mechanics continue to hold up extremely well. When you enter a fight, you'll see a circular meter in the upper-right corner of the screen called the IP gauge. Icons representing each of your characters and each enemy present then slowly rotate around the gauge, passing through three phases. The first is the command-entry area, where enemies and allies will determine their next action. The second is the command-execution area, where you'll have to reach the command line to actually carry out your attack. The third area is a sort of waiting zone between the other two. The trick to Grandia's battle system is that attacking enemies will serve to delay their motion on the gauge slightly, and if certain special attacks hit people during the execution phase, you can actually cancel an enemy's attack altogether, knocking their initiative way back. Fights then rely on the delicate balance between your characters' turns, your enemies' turns, whether or not you have any special or critical attacks at your disposal when your foe's planning to smite you, and so forth.

It sounds complex, and it is, but the system is surprisingly easy to learn and highly versatile. In no time you'll find yourself expertly juggling your characters' initiative so you can be in the right place at the right time to cancel enemy attacks. If you're particularly good and you get lucky, you can go through whole fights pushing back enemy turns and finally winning without them even so much as touching you. Of course, the same sort of shenanigans can apply to your party, so you'll always need to keep an eye on what the monsters are up to--you can easily see whom a given foe is targeting and what attack they're preparing, so you can move accordingly. There's also an in-game help option that has characters calling out suggestions to each other on when to counter or defend to help you get used to the system; you can turn it off whenever you like. The only real downside to things is that you'll often end up having to play a very defensive game, particularly against strong bosses. Some boss fights involve multiple characters and targets, so you'll have to think quickly to continually block important moves while trying to find a time when you can launch a powerful offensive.

Your characters will continue to refine special moves with use, learning new ones as they become increasingly proficient at the old. If you can catch an enemy getting hit up into the air by one character, a second character can hit that foe in the air for a powerful aerial assault for increased damage. Other damage modifiers include passive skills you can purchase and teach to characters, and magical spells that you can also purchase and equip in the same way. Equipping skill books and mana eggs will boost your skills and magic, respectively, and you can swap out your characters' passive skills and magic spells at shops and save points if you like.

The customization system is pretty open, but aside from gathering a number of skill books, mana eggs, and new weapons and armor for your characters, there's not much else to tweak or occupy your time outside of the main narrative. Grandia III takes in the neighborhood of 30 hours to finish, and you'll have moved on to the second disc by 15 or so hours played. While dungeons usually have a few paths laden with items for you to find, there are no real side quests or crazy content to pad things out otherwise.

Visually, the journey acquits itself well; the 3D character models don't lip-synch perfectly and sometimes exhibit too-quick, unnatural motions, but otherwise they have a good variety of gestures and animations. A lot of the environments tend to be simple landscapes of rock, grass, or sand, ruins and temples, forests, and more, but there are often background touches that really help bring the areas to life. It might be the strong sparkle of sunlight on a lake, a sudden rainstorm as you pilot Yuki's aircraft over the world, or fluffy clouds sculling around mountaintops, but these enhancements do much to accent what might otherwise be somewhat drab areas. Monsters have a nice variety as well, and the Guardians are simply awe-inspiring--grand and looming and just impossibly huge, they're magnificent spiritual deities. The music suits the action well without standing out, with the exception of the crazy pop opening theme song. That one takes some time to get used to, but it ties in with the overall themes of the game and its characters nicely.

While not as stuffed with features and extra content as some of the other RPGs currently available, Grandia III still delivers an interesting (if traditional) story, fun characters, and a versatile, strategy-based battle system that keeps the fighting fresh and challenging. If you've soured on the common turn-based fare and want a role-playing game with a different flavor, definitely give Grandia III a chance. 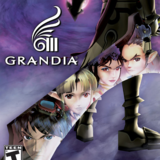 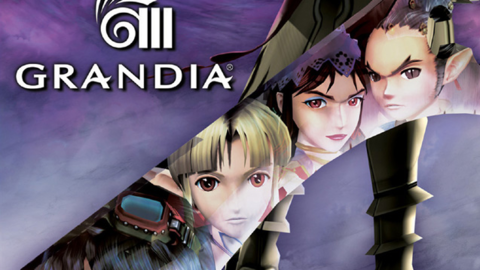 Grandia III is the latest installment in the long-running Square Enix role-playing series. You play as Yuuki, a 16-year-old boy with aspirations of being a pilot.