Golden Sun is a throwback to some of the SNES' best.

Looking back, the Super Nintendo has to be regarded as one of the best showcases for the RPG genre and 2D graphics. Back in the day, the system was home to some of the best games in the genre. You may well be in for a very pleasant sense of déjà vu when you fire up Nintendo's latest RPG offering on the Game Boy Advance, Golden Sun. Featuring some of the best graphics seen on the system, a rich quest, and classic RPG gameplay, Golden Sun is a throwback to some of the SNES' best.

The game's story puts you in the role of a young man named Isaac from a remote village called Vale. The elders of the village have been caretakers of an ancient mountain temple, Sol Sanctum, which guards a seal on the science of alchemy. When the seal is broken and a group of strangers, who have kidnapped two of Isaac's friends, attempt to release the powers of alchemy on the world, Isaac must venture out into the world and set things right.

Like its story, Golden Sun's gameplay includes tried-and-true features as well. Developed by Camelot Software Planning, the game should offer Shining Force fans some welcome flashbacks. Golden Sun reflects Camelot's roots, offering a mixture of little touches that harken back to classic RPGs and some new twists on combat and magic. The game plays like most RPGs: You'll travel the world on foot, venturing from town to town and talking with people. Along the way you'll solve puzzles and help those in need who cross your path in your quest to rescue your friends and save the world. While it all sounds fairly standard for an RPG, the game comes together nicely. RPG vets should be satisfied with the game's rich quest, which, while a bit short, compares favorably to those from the 16-bit era--offering optional side quests to supplement the main action.

One of Golden Sun's biggest strengths lies in its combat engine. Taking a page almost directly from a Shining Force game, Golden Sun features turn-based combat with an icon-based menu system. Characters will have access to physical attacks, a power called psyenergy that basically works like magic, and elemental creatures called djinn, which can be used to attack enemies or summon spirits in battle. The pace of combat is usually quick and is sometimes challenging as you try to find the best combination of physical and psyenergy attacks to take out enemies in your way. The only blemish on the sterling setup is the inability of members in your party to target another enemy if their intended target has been killed before their turn to attack comes up.

RPG fans should be pleased with Golden Sun's psyenergy system and the djinn. While mostly used for combat, psyenergy powers come to have many uses in the game as you progress. By assigning djinn to the proper character or by picking up special items, you'll find that you can use psyenergy powers in town or in dungeons. The powers can be extremely useful, giving you the ability to read the minds of people you encounter, move stones, or reveal hidden items or paths in dungeons. The djinn are equally important because they'll raise your stats, possibly change your class, and sometimes give you access to other psyenergy.

A link-cable battle mode has been tossed in to give the game a bit of replayability. By using a save from your existing single-player game you'll be able to pit your party against a friend's. If you have no friends (or, at least, no friends with GBAs and link cables), you'll be able to play battle mode by yourself and take on monsters you've defeated in the single-player game. While the mode is really just there for fun--you won't be penalized or rewarded for playing it--it's nice to see an RPG with a multiplayer mode.

To complement the game's slick gameplay, the developer has coaxed some truly sweet graphics out of the GBA. Featuring detailed sprites and environments that are on par with what's been seen on the SNES, Golden Sun is a looker. But the game offers more eye candy than just sharp 16-bit graphics--its attacks and spells are given an extra layer of gloss thanks to impressive polygonal effects. Unfortunately the GBA's screen can make it difficult to appreciate the game's graphics if you're in less-than-optimal lighting. Fortunately, the engaging gameplay will have you shrugging off poor visibility.

Golden Sun holds its own against most full-sized console games. While the quest could be longer, the time spent in it is nearly all quality time--it has less shameless filler than other RPGs. The game offers tight graphics, polished gameplay, and a solid story, which provide a great showcase for the GBA. You'll be left wanting more, and judging by the game's ending, we may see a sequel. Fans of RPGs owe it to themselves to pick up Golden Sun. 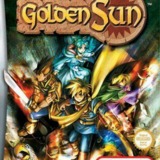