Ghostrunner is a hard-charging parkour climb, but summiting its platforming challenges is a thrill worth fighting for.

Ghostrunner's intense first-person parkour platforming demands perfection. Whether you're clearing out a neon cityscape of cyberpunk goons or racing on walls and sliding through vents of a gigantic factory, even a small miscalculation will get you killed. Your jumps need to be precise. Every swing of your sword should be deadly. Anything less isn't up to robot ninja spec. Ghostrunner is quick to punish, but it's also more than willing to reward players who rise to its challenge. Bouncing from wall to wall feels like flying. Running circles around gunmen, dodging bullets, and cutting them down without a scratch is exhilarating. It's a high-risk, high-reward situation: Struggling with failure after failure, even on simple tasks, is incredibly frustrating early on, but that anger eventually dissipates as your skill grows to reveal a thrilling test of your abilities.

Set in a cyberpunk-style post-apocalyptic world, Ghostrunner puts you in control of a robot ninja assassin on a mission to kill his world's authoritarian ruler. (She also nearly killed him a while back, so it's a twofer! Revolution and revenge.) There's a twisty, turny plot, but it's often very detached from what you're actually playing, as it's told almost exclusively through voiceover.

Ghostrunner adheres quite closely to tenets of cyberpunk's visual aesthetic. You run through dirty dilapidated cities with dark corners, contrasted with neon signs and bright screens lighting up the night. Some of the enemies you face are literal cyborg punks. Don't worry; there are also plenty of robots. There have been enough cyberpunk stories in games that this look isn't especially fresh, but that doesn't stop it from looking cool. It helps that, on a technical level, Ghostrunner looks very sharp. The environments, enemies, and your sword, which is always sticking out in front of you, are all incredibly detailed. It may not be the most creatively constructed, but it is appealing all the same.

Despite the fact that you control a robot ninja assassin and much of the game revolves around killing, Ghostrunner is, first and foremost, a first-person platformer. Every sequence, whether it includes combat or not, features paneled walls for you to run across, rails for you to slide down, and conveniently placed loops compatible with your grappling hook to let you do some superhuman parkour. Chaining these maneuvers seamlessly allows you to build up speed, which keeps enemies from landing their shots and lets you make bigger jumps, powering even larger, bolder maneuvers. Many of the areas, especially platforming sections without enemies, are designed to let you stay mobile. When you are in a fight, speed is power: Dancing around enemies and dodging bullets makes you feel like an unstoppable force, doubly so when you take everyone out without missing a step.

Combining the wall-runs, dashes, slides, and other maneuvers to move around the world seamlessly takes sustained focus and quick reflexes. You have to aim your jumps precisely before moving from one element to the next, while also keeping an eye on the path forward so you know where you're going. The faster you move, the less time you have to aim before you jump, so it becomes harder to stay in control the longer you stay mobile; a poorly aimed or mistimed jump can send you flying past a platform. Even a tiny miscalculation can cost you momentum and leave you exposed to enemy fire. The demands of traversal lead to a lot of frustrating deaths early on but make success incredibly rewarding. Being able to jump around a combat arena without losing speed makes you feel masterful.

The combat in Ghostrunner is really an extension of the platforming, though it rarely feels that simple. Almost every enemy dies with a single strike. If you get close enough to the enemy to slash them, they're dead, so the challenge is in the approach, not the fighting itself. There are a decent number of enemy types, each of which has a unique skill set that creates an interesting new wrinkle you'll need to account for in a fight. Though many of them are straightforward--there's a soldier with a shield, a ninja who needs to be parried, and so on--they are still tricky to dispatch and require precise timing. Every encounter deftly blends environmental hurdles and new sets of enemy types to make every level feel exciting from one section to the next, even as you effectively do the same thing over and over.

In fairness, it isn't just "sword tag." You get some combat-focused abilities that give you more options for dealing with enemies. First and foremost, your dash allows you to briefly slow down time to sidestep an enemy bullet at the last second. You also get a series of special attacks, including a “blink” dash that lets you slice through multiple enemies and bullets in a straight line, and a projectile-reflecting shockwave. Each of the four abilities gives you an interesting way to create new opportunities for yourself, whether it's lining up enemies to take them down in one fell swoop or drawing fire, just to reflect it.

Learning to use those tools, how to run, and how to play Ghostrunner is a painful process at times. The Ghostrunner is a glass cannon--a single hit will kill you--and most platforming runs require tight timing. The only way to “practice” your moves is to fail and try again, so you can expect to die a lot. (Luckily, reloading your last checkpoint on PC is nearly instantaneous). Even when you don't die, it can be frustrating to have to break a parkour run because you couldn't figure out where to go next without stopping to look around. If you're like me, and your reflexes aren't esports-class, it takes dedication (and some muscle memory) to complete an area without making a fatal error. The satisfaction of doing it is worth the effort, but there's some anxiety and bitterness mixed in with the excitement and awe.

When Ghostrunner rips, it really rips. Wall-running, jumping, sliding, and cutting through enemies as you go is empowering and impressive. For a good portion of the game, you'll only experience how impressive it feels to dart around a room in short bursts, but even that's enough motivation to keep you pushing forward to master the art of robot ninja parkour. There's bound to be a lot of frustration along the way, so it isn't all smiles, exactly, but the rush you feel in the moment as you perfectly run a room is worth the grit. 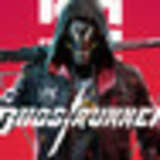 Mike Epstein would not make a good ninja. He's loud, slow, and has bad knees. He played Ghostrunner for just over nine hours. Review code was provided by the publisher.