Dead men, the saying goes, tell no tales. Luckily, this old adage doesn't apply to the recently deceased central character of Ghost Trick: Phantom Detective. In Ghost Trick, you take control of a soul who has no memory of his prior life and is desperate to uncover the truth behind his mysterious death. This investigation takes the form of a unique adventure game filled with terrific characters, compelling puzzles, and a labyrinthine mystery that keeps you guessing and that pays off in a big way. Don't let the fact that the main character is dead mislead you: this lively adventure is a breath of fresh air. You've never played a game quite like Ghost Trick.

Disoriented, you come to in a junkyard on the outskirts of a city. You don't remember much, but one fact is abundantly clear: you've just been killed. Presumably the crumpled body of the pointy-haired blond gentleman lying amid the garbage was yours--and if you don't do something quickly, the young woman being held at gunpoint over your body will soon be dead, too. This intriguing opening sets the stage for Ghost Trick, all of which takes place during the course of one long night. You soon learn that your name was Sissel, but everything else about your past remains a mystery you are determined to solve. Your quest for the truth about who you were, who killed you, and why brings you into the lives of a host of wonderful characters--feisty young detectives, shortsighted assassins, bushy-eyebrowed military commanders, roller-skating chicken restaurant waitresses, dancing prison guards, valiant puppies, and many, many more.

Spending time with these characters is a joy; their snappy dialogue is consistently entertaining, and their stunningly smooth and expressive animations make their movements mesmerizing to behold and speak volumes about the characters themselves. Some characters move with a stiffness that mirrors their rigid outlooks, while other characters exhibit a spring in their step that reflects their more spirited personalities. The environments these characters inhabit are presented in a striking style whose clean lines and sharp angles make details pop off the screen.

The unique way in which you interact with the world of Ghost Trick is as fantastic as the game's visuals. You view the characters and environments from a two-dimensional side view. As a disembodied soul, you can move between the ghost world and the real world. While in the ghost world, you can move around the environments, hopping from object to object. Not everything can be possessed; in the ghost world, your soul appears as a flame, and any objects you can possess have glowing cores. You have a very limited range and can only move to nearby objects; you move from one to another either by dragging your soul from place to place with the stylus or by using the D pad. When you possess an object, it appears on the top screen, along with a description of the trick (if any) that you can perform with that object. Haunt a refrigerator, for instance, and the top screen may indicate that you can open it with your ghostly powers, extending your reach and giving you access to new places. Possess a guitar, and you might see that you can strum it, which may startle a hit man and prevent him from killing his target. The controls for all this couldn't be simpler; you press buttons on the touch screen to switch between the ghost world and the real world, and to do a trick with whatever object you're possessing. Figuring out how to use these powers to your advantage is a big part of the fun of Ghost Trick.

There are two general kinds of situations you find yourself in. Sometimes, you are in the present and need to manipulate objects to move to a specific location, help a character sneak past prowling guards, or accomplish some other objective. You also spend much of your time in the past. Many people end up dying over the course of the night, and when you come into contact with one of these fresh corpses, your powers let you hop back to four minutes before the victim's death. You watch the circumstances that led up to the victim's demise play out, and then you repeat them as an active participant, trying to find a way to change the past and prevent the victim's death. In an early scenario that serves as a tutorial, for instance, you change the past by bringing a wrecking ball down on an assassin's head.

These situations start out quite simple, with a small number of objects you can possess and rather obvious solutions, which gives you an opportunity to get comfortable with the unusual gameplay mechanics and the logic behind Ghost Trick's puzzles. Gradually, situations become more elaborate and challenging. Time doesn't pass while you are in the ghost world, moving from object to object, but you must return to the real world, where time does pass, to manipulate any object, and often you must be observant and wait for just the right moment to act. You may need to possess a crumpled piece of paper as it's being hurled across a room, for instance, or hitch a ride on a rapidly passing bike. If you miss your chance, though, you can hop back to a checkpoint and take another shot at changing fate.

As situations become more complex, it sometimes turns out that during the last four minutes of a victim's life, there's nothing you can do in the environment to prevent the murder. In some such cases, you need to travel to other locations (which you do using telephone lines) and change the course of events there to stop the death from happening. In other situations, during your examination of the last four minutes of one person's life, sometimes you encounter another corpse, letting you go back even further in time in pursuit of a way to alter the victims' fates. These more intricate scenarios are fun to investigate and explore, with each new environment you visit often giving you amusing new conversations to eavesdrop on, and working out how to save victims' lives becomes more satisfying as the scenarios become more challenging.

A significant amount of trial and error is often required to solve these puzzles, but it's an enjoyable sort of trial and error, because your experiments with different objects and the effects your tricks have on the world help you figure out what might work and rule out what definitely won't. As you interact with objects, characters make comments that nudge you in the right direction without giving away the solution entirely. If someone comments about the weight of an urn, for instance, you can bet dollars to donuts that the urn's weight will be important to your solution. Even with the absence of any penalty for failure, there's a feeling of suspense created as you work to save someone's life, knowing exactly how and when he or she will die if you fail. This is especially true of some scenarios late in the game, such as one where you work to save people who are trapped in a chamber that's flooding with water, creating a tense feeling of racing against the clock as you see the water level rising.

Original as the game is, the novelty of Ghost Trick's gameplay starts to wear off a bit, because for the majority of the game, it doesn't evolve in any way. Until very late in the game, you're limited to possessing and doing tricks with objects. Eventually, Sissel collaborates with another soul, whose power is to swap two objects of the same shape, giving the puzzles a new dimension, but changes like this earlier on would have brought a welcome degree of added complexity. Still, although your powers remain unchanged throughout most of the game, the scenarios you're faced with are varied enough to make each new puzzle engaging.

Each new chapter of your investigation sheds some light on your identity or the facts surrounding your death, but as in any good mystery, these revelations often only lead to bigger, more puzzling questions. There's a grimness to some of the game's subject matter--there are murders aplenty, as well as characters who are haunted by past events, and Sissel's investigation requires him to confront some painful truths--but the tone of the game smartly turns its sometimes heavy subject matter into a source of some of its funnier moments. It's initially rather sad, for instance, the way one character you repeatedly save from death goes on to be killed again and again, but the way the frequently killed young woman responds to each of her murders with more moxie and determination than the last makes her misfortune more amusing than melancholy. There’s a comic absurdity to the plot, too, that prevents it from becoming too dark and serious. (The conspiracy at the heart of the game involves, among other things, a man who goes on a rampage because of some overly spicy curry.) And when the final revelations are made and the truth falls into place, the fragments that make up the game's story come together in a surprising and very gratifying way.

Ghost Trick is one of the most original and compelling puzzle-oriented adventure games to come along in recent years. Nearly every facet of the game is outstanding: the unique gameplay concept and the puzzles you solve, the great characters and dialogue, the terrific animation and visual design, and the strange mystery, full of surprising twists and shocking revelations, whose threads all come together in a memorable and rewarding conclusion. The length of the game can vary significantly depending on how long it takes you to work out the puzzles, but you can expect to spend a good 10-15 hours piecing together this mystery, and its novelty and quality ensure that the experience will remain fondly in your memory well after that. If you have any interest in games of this kind, you need to play Ghost Trick. 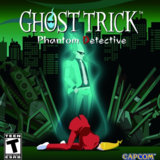 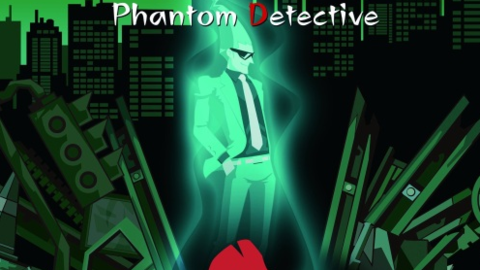 Take on the role of Sissel, an amnesiac ghost who must use its ghostly powers to protect the lives of several people while attempting to uncover the secrets behind its own untimely demise.