Geometry Wars: Retro Evolved was one of the premier games for the Xbox 360 launch. It established low-cost downloadable games as a worthy alternative to full-priced, big-budget fare and made leaderboard races between friends a reason to keep playing through the night. But with such a simple mechanic, the idea of a full-fledged sequel being able to capture the same addictive nature of the original seemed like a pipe dream, especially after the subsequent sequels came and went without causing a stir. More than two years after Retro Evolved ushered in the next generation of gaming, developer Bizzare Creations has devised a game that doesn't just top the original, it blows it away. With five new modes that require unique strategies and cutthroat multiplayer competition that is among the best for any XBLA game, Geometry Wars: Retro Evolved 2 is the new standard for frantic downloadable games.

From a gameplay perspective, the biggest difference between Retro Evolved 2 and the original is the addition of geoms. These tiny green gems are the key to racking up ridiculous scores. Instead of raising your multiplier by shooting enemies, you have to collect the goodies that they drop. The original game put a 10x cap on your multiplier, but in the sequel you're limited only by your reckless desire to collect more geoms. Your multiplier will no longer reset when you die, so your best efforts from the XBLA original will seem like puny nothings now. Furthermore, you no longer need to worry about being stuck with the shoddy weapon while being surrounded by those dastardly snake creatures; there are no weapon upgrades, and your standard gun is more than enough to keep those evil shapes at bay.

The most divergent of the five new modes introduced in Retro Evolved 2 is Pacifism. As the name implies, you won't actually be shooting enemies. Instead, the level is loaded with slalom-type gates that explode when you fly through the center. However, if you accidentally bump into the orange edges that hold this contraption together, you will be the one who explodes. The idea of playing Geometry Wars without a gun may seem impossible, but you face off against lemming-like blue diamonds that dutifully follow as you lead them down death's trail. It is incredibly satisfying to get a huge fleet of these troopers to follow you as you burst through multiple gates, destroying the platoon in a massive explosion.

Other new modes don't stray quite as far from the standard GeoWars formula, but they are every bit as engaging. Waves returns from its stint as a Project Gotham Racing 4 unlockable. A wall of orange missiles will emerge from one of the four sides every few seconds, making you constantly watch your back as another massive fleet closes in on you. King mode places three circular safe zones around the map that are the only places from which you can fire. Since these havens will disappear soon after you enter them, you'll have to constantly swoop around the battlefield, collecting geoms while you desperately try to find a new home where you can hide and safely destroy enemies again. Sequence is the only mode that has an actual ending, but only expert players will ever be able to reach it. Here you'll blast through 20 levels that have the same enemy placement every time. Memory won't be enough to ensure victory because the rooms are near to bursting with enemies, which makes survival seem like a crazy fantasy. It's exhausting but extremely rewarding, even if you never make it to the end.

The remaining two modes are tweaked versions of the traditional free-for-all. Though Evolved mode is structurally the same as the original, the addition of geoms changes the strategy of battle. You'll have to constantly circle back on enemies that you've destroyed if you want to extend your multiplier, which makes the risk/reward dynamic all the more satisfying. Deadline limits the carnage to just three minutes, which makes collecting geoms your number-one priority. Both of these modes should satisfy Evolved veterans looking for more traditional shooting action.

Retro Evolved 2's visuals are definitely a step up from those in the first game. The screen is bursting with even more colors now, and every explosion fills half the screen with gorgeous lights. The enemies are much more distinct, too, and their brighter colors make it easier to identify them and work out a contingency plan. The sound is also much improved from the original. Every mode has its own music track, which gives each the tone that it needs. Pacifist offers a much more subdued feel, whereas Waves is just bursting with chaos. The explosions are extremely sharp and punctuate the music with bursts of energy.

The multiplayer mode takes the whole experience to another level of crazy fun. You can quadruple your firepower with cooperative mode, though it doesn't make the game any easier because keeping track of everything onscreen adds another layer of depth in an already frantic game. Copilot is utterly ridiculous: In this mode, one player steers while another shoots, so you place your fate in your friend's hands. Competitive mode is even tastier. Fighting for geoms while trying to stay alive longer than your friends is a teeth-baring treat that should keep you coming back for more. There are even scattered power-ups here that upgrade your weapon, freeze your friends, or turn you into a geom magnet, among other things. It's a shame that this mode is offline only, but it serves to make an already great game almost impossible to put down.

Retro Evolved 2 is a shockingly good sequel. The only problem is the lack of an online multiplayer mode. Everything else on display here is a drastic improvement over the original. Every new mode is extremely fun to play and requires a totally different play style to master. The geoms put upgrading fully in your hands; you have to decide if you want to risk your life for a couple of green gems or if you want to focus on staying alive. Even little tweaks--such as including your closest friend's highest score in the upper right corner of your screen to constantly give you a new goal to strive for--raise the addiction level. At only 800 MS points ($10), this is not only a great value but also one of the best games on XBLA. 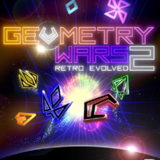 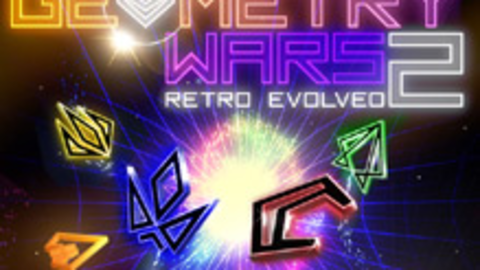 Geometry Wars: Retro Evolved 2, the sequel to the smash hit, takes you on an all new ride through six different action-packed gameplay modes.