Gauntlet Legends is another piece of evidence that indicates that some classics should be left well enough alone.

You remember Gauntlet, don't you? Between bites of pizza or slurps of soda, you played as a warrior of light slapped into an endless series of randomly generated dungeon levels, where you fought a slew of evil denizens. Not too long ago, Gauntlet suffered the fate of many classic games: It was given a major facelift and reinvented for the '90s. Unfortunately, Gauntlet Legends wasn't a particularly good arcade game, and it isn't any better on the N64.

Those of you unfamiliar with the arcade version of the remake will at least be familiar with the unchanged premise. You still act as one of four characters (warrior, valkyrie, wizard, or archer) who make a stand against a seemingly bottomless reservoir of baddies. All the while you'll collect treasure, play with magic, and dish out the hurt. However, there have been some additions to the formula: You'll now be able to buy stuff with that treasure; levels now have themes; and you'll have to go up against bosses at the end of certain stages. And now our little elven archer buddy is a she.

Gauntlet Legends takes advantage of Nintendo's RAM pak, but don't expect it to look nearly as good as most other games that do. It seems as though there was a polygon shortage around the time of this game's development, as everything has a real flat look to it. Gauntlet Legends tried to take the birds-eye-view concept of the original and transfer it into a 3D environment, but this simply doesn't work, and you end up playing essentially the same old game with prettier looking backgrounds. Even though my character was now climbing volcanic mountains, exploring temples, and trekking through the East, I still would have preferred the basic, randomly generated 2D dungeon. Maybe there was just something special about the carbon-copy levels contained in the original that made Gauntlet so enjoyable. (Or maybe it was because I was twelve. Who knows?)

The gameplay hasn't changed. You're still meandering about, opening doors, collecting treasure, and killing everything around you. And, just as in the arcade version, you don't even have to hit the attack button if you don't want to - it'll automatically strike enemies for you when you get close. This makes the game extremely one-hand friendly, and it takes the challenge of out playing. Although there's a new money system that lets you buy power-ups, I found that I was instead collecting power-ups and selling them just to buy my health back. And on the audio front, you'll be sick of the God-like voice that reads all the obvious game hints for you by the second level. In fact, there's really nothing great about the sound in the game. The music is mediocre at best, and the sound effects are repetitive.

Gauntlet Legends boils down to another top-down fantasy button masher. There's nothing innovative here, and the game is neither enthralling nor interesting. There's no real motivation to complete the game, and the reward you receive once you do makes you regret the time you had invested in the game. Unfortunately, this game is another piece of evidence that indicates that some classics should be left well enough alone. 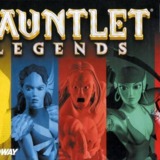