Tecmo delivers yet another horse-racing simulation that's too dry and dense for anyone other than the most devout fans.

After taking a break for a year in the US, Tecmo returns to the track with Gallop Racer 2006. You might think that, given the extra development time, Tecmo would take care to really refine the presentation, create a more visceral gameplay experience, or just generally attempt to make the whole package more approachable to anyone who hasn't spent years steeped in horse-racing culture; but unfortunately, you'd be mistaken. In fact, Gallop Racer 2006 mostly just rearranges the core components of past games and even loses some of the more cohesive career aspects of Gallop Racer 2004. Still, what's there will undoubtedly appeal to the enthusiasts that have kept the series going for all these years.

There is, as always, an almost boggling amount of depth and nuance to the actual horses in Gallop Racer. Each horse is host to more than a dozen different stats and abilities that define not just how fast they can run and for how long, but also more subtle aspects such as how quickly they can reach their top speed, their ability to change speed on the fly, how responsive they are to the jockey's commands, where they prefer to stand in the pack, and how well they perform at a large-scale event. All of this information is readily available, albeit in a presentation thick with abbreviations and cryptic symbols and graphs. It can take a good deal of time, but once you're able to divine the significance of each stat, it's easy to determine how to ride your horse and which events you stand a good chance of winning.

Following suit, the horse racing is also fairly technical. There are several different meters to keep an eye on, including your horse's current speed, stamina, and mental condition; the speed being demanded by the jockey; and a slot-machine-style "revolution" meter that, if the conditions are right and you're lucky, can unlock otherwise inaccessible power and speed in your horse. The game emphasizes harmony between horse and jockey right out of the gate by challenging you to stop the swinging horse and jockey speed meters as close together as possible before the starting gates open.

Once you're out on the track, it becomes a matter of managing your horse's stamina, pack position, and mental condition, all of which are interconnected to a degree--ride your horse too hard, and it'll run out of steam before it gets to the finish line. You'll mostly be nudging your horse around with the reins, though once you get down to the back stretch, it can be beneficial to break out the whip to get a little extra spirit out of the horse, though you can also just show the whip to the horse and often get the results you're looking for without the physical duress on the animal. There are a few different control schemes you can choose from, including a hands-off setup, where you choose from a handful of desired behavioral guidelines and basically let the race play out as it does. But even when you're getting your hands dirty out there, the experience is ultimately too abstracted and technical to be very viscerally exciting, and even though there's a variety of race lengths and track surfaces, as well as a huge array of unique North American, Japanese, and European tracks to race on, it doesn't take too long for the races to all start feeling the same.

Forgoing Gallop Racer 2004's colorful career mode, this year's model features a "theme park" where you can choose from three different modes. Once you've determined your jockey's name, gender, and jersey design, you're given a handful of cash and thrown out into the world. The gallop-stallion mode is where you'll choose from different mares and studs to breed, creating your own unique foal. Of course, the attributes of the horses you choose to breed will be passed on to your new horse, and there are so many variables to factor in when making your choices, not least of which are the breeding fees, that it's easy to be overwhelmed by everything that's presented. The game simply doesn't give you as much guidance here as it ought to.

The title-collection mode is where you'll be doing most of your actual racing, and you can choose to race your own custom horse or one of the game's randomly generated horses. There's a real Mad Libs style to the way the horse names are determined, and though there are some unintentionally hilarious names, such as "Air Cancer" or "Frank Javelin," it's rare that they actually sound like real racehorse names. Taking your horse of choice, you can then start scheduling races that you qualify for on a week-to-week basis. Generally, winning races is a good thing, but to really advance in the title-collection mode, you'll have to focus your efforts on winning very specific races to earn special horse titles--for example, to win the triple crown horse title, you'll have to win three specific races that only come around once a year. Other horse titles are less specific and demand that you simply win races of certain lengths or certain classifications. There are dozens of unique horse titles, and more become revealed as you continue to rack up the wins.

You can also place bets on your own horses just before a race, and you can choose from standard win, place, show, quiniela, exacta, and trifecta bets, though there's unfortunately no day-at-the-races-style option to simply hang out and bet on the ponies. Though the field-of-legend mode is inaccessible from the start, putting in enough time with the title-collection mode will unlock this series of challenging dream races. This mode is strictly for the most dedicated players, since you need a stable of at least seven top-form horses to run right in the field-of-legend mode, where a single loss will take you out of the running. You have a few options outside of the theme park, as well. The simulation mode lets you customize races, horses, and jockeys, while the versus mode pits two players against each other in a series of races, and the free mode simply lets you race, no strings attached.

While past Gallop Racers have taken some strides to be a bit friendlier, with thorough tutorials, streamlined career modes, and goofy cartoon trainers and jockeys, the whole of Gallop Racer 2006 just feels cold and cumbersome. Figuring out the ins and outs of the different modes within the theme park requires more legwork than it ought to, and you'll likely find yourself referencing the game's manual almost constantly during the first few hours of play. The whole experience feels aggressively counterintuitive. Though the horses themselves look realistic and animate smoothly enough, it's basically just the same model with different colorations, and there's very little personality or flair to the different tracks, leaving you with a generally bland presentation. Despite the fact that he occasionally shouts the bewildering exclamation of "Show your guts!" not even the game's announcer, who is otherwise pretty ineffectual, adds much color to the proceedings.

But, if it's a horse-racing simulation you're looking for, there aren't that many other options out there, and on a technical level, Gallop Racer 2006 is pretty proficient; it's just not a very inviting experience. Fans who have already acclimated themselves to the generally noninclusive tone of the franchise shouldn't have too much trouble digging through the clumsy interface and often clinical appearance, but it's probably not worth the trouble to anyone else. 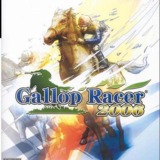 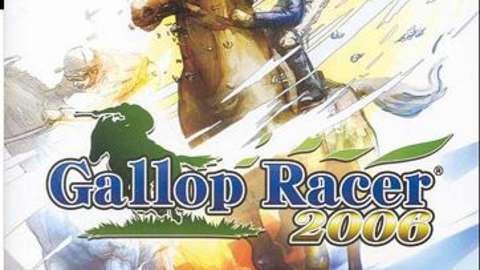 Known as Gallop Racer 8: Live Horse Racing in Japan, Gallop Racer 2006 challenges you to select or create a horse and use it to compete in horse racing competitions.