I'll show you who's boss.

When I first set my eyes on the stylish boss battle game Furi, I was sold by its striking presentation and excited about its mix of shoot-'em-up action and swordplay. It pits you against just under a dozen bosses, most of whom are relentless, strong, and fast. They don't just have one health bar; they have multiple, each one representing a new, and more challenging phase of combat. Their designs are the work of Afro Samurai artist Takashi Okazaki, and each is distinct and challenging in their own way; you won't soon forget their faces, let alone their fiendish fighting styles.

Armed with an energy pistol, a sword, and the ability to dash, you have to fight bosses that turn invisible, bosses that automatically generate protective barriers, and bosses that emit dense and chaotic waves of bullets. Most stages are small circular arenas, but there are other locations that bend the rules, introducing a web of platforms or shifting to a 2D plane. Every battle is heightened by a thumping, energizing song from artists like Carpenter Brut and Danger, whose electric compositions are second-to-none, providing the perfect accompaniment whether you're on the brink of victory or the verge of defeat.

Music aside, few battle stages are memorable, but the landscapes you trot across between battles leave an unmistakable impression. They are barren, weird, and coated in neon, presented through dramatic and occasionally unsettling camera angles. Furi is a beautiful game, one-upping its visuals from one scene to the next, but there are times when your surreal hikes overstay their welcome and you thirst for combat breeds temporary impatience; eye-catching cutscenes can't match the thrill of combat.

Battles typically encompass two phases of fighting: free-roaming in an arena, and close-quarters within a small, circular boundary. While free-roaming, you play Furi like a twin stick shooter, where the direction of movement is independent from the trajectory of your gun's projectiles. Though your gun allows you to attack enemies from afar, they are only vulnerable at certain times, often in the middle of an action that ultimately produces an attack you have to avoid, or if you're quick with your sword, deflect back. So you fire your gun and dance out of harm's way, but when a boss rushes up for a melee attack, you have two options: dash away, or try to parry their attack. Dash, and you may be safe, but you are doing yourself a disservice. To succeed at Furi is to master the art of parrying, and anything less will almost certainly guarantee failure in later stages.

Despite being difficult, Furi gives you all the tools you need to succeed from the very beginning, and while the odds are in favor of your opponents, it's the point. They don't call them bosses for nothing.

Before an enemy issues a parryable attack, they will flash for an instant. Logic tells you that you should press the parry button during the flash, but in practice, the timing feels somewhat loose. "No one said this was supposed to be fair," said one of my nemeses. She was right, and there were times that I felt Furi was unfair; times when I needed an excuse for failure. When you make it to the final phase of a 20-minute fight and die due to a small number of mistakes, it's easy to lose your cool having lost so much progress. Despite being difficult, Furi gives you all the tools you need to succeed from the very beginning, and while the odds are in favor of your opponents, it's the point. They don't call them bosses for nothing.

Though the pace and rhythm of each boss' melee attacks change, when you establish a subconscious alignment with Furi's timing, you feel at home in combat. Without that skill, success is nigh impossible. To enjoy Furi is to understand its unspoken rules, a process that may involve repeated failure, and in turn, frustration, however: once you attain the ability to deflect attacks and punish your opponent with confidence, any feelings that Furi's bosses are unfair disappear.

Upon completing the game, a bumpy process that took almost 10 hours, I felt accomplished, but I didn't feel like my work was finished; I couldn't help but start over. I had improved, both in terms of skill and knowledge. I knew how each boss behaved, and how to counter their most punishing attacks. My second time through the game, I had the advantage, and with my newfound confidence, I was an efficient killer, not desperate prey, and I beat the game in just over two hours without dying. Despite having seen it all before, Furi transformed as I had transformed, and what was once "too difficult" felt just right.

Furi will make you sweat under pressure, scream in frustration, but it will also give you the drive to get better; to become a boss of your own.

Furi lures you in with a cool lead character and a powerful soundtrack--qualities that are easy to appreciate--but its the journey to become a better fighter that defines the experience. Its disparate components are potent and leave an unforgettable impression that you won't soon forget. Furi will make you sweat under pressure, scream in frustration, but it will also give you the drive to get better; to become a boss of your own. Once you do, there's almost no feeling like it.

View Comments (110)
Back To Top
8
Great
About GameSpot Reviews 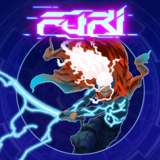 Peter beat Furi twice on the default difficulty before writing his review. GameSpot was provided with a complimentary copy of the game for the purpose of this review.