Fullmetal Alchemist 2: Curse of the Crimson Elixir offers a surprisingly varied and entertaining experience that captures some of the best aspects of the anime in its gameplay.

Games based on licensed properties don't have a great track record when it comes to quality. So it's easy to turn a skeptical eye to a game based on an animated series. However, Fullmetal Alchemist 2: Curse of the Crimson Elixir offers a surprisingly varied and entertaining experience that captures some of the best aspects of the anime in its gameplay. It's not without flaws, and it's fairly short to boot, but if you're a fan of both the Elric brothers and over-the-top transmutations, you'll find lots to like here.

The storyline of FMA2 has its roots in the initial episodes of the cartoon. However, their resolutions have been slightly shifted to feed into an all-new narrative arc. The brothers Edward and Alphonse Elric are once again the stars as they travel the world seeking news of the fabled Philosopher's Stone. On their journey, they continually encounter strange "crimson stones," alchemical amplifiers of great power and mysterious origins. Factor in the appearance of shadowy golems running amok in many a peaceful hamlet, as well as an enigmatic girl speaking in ciphers, and it's enough to get the Elrics interested. They set out to seek answers, backed by their state alchemist allies. There's a whole lot of story crammed into this game, with frequent dialogue-laden cutscenes interspersed into the action levels. It serves as a well-constructed original piece in the Fullmetal Alchemist world, and the gameplay is a similar fit.

Ed and Al are alchemists, so they're capable of transmuting objects into whatever they wish, provided the required elements are available. You'll control Ed, the older brother, whose metal "automail" arm and leg have earned him the name "Fullmetal Alchemist." Ed can fight unarmed with his fists and feet, combining strikes for additional damage, as well as turn his metal arm into a blade or summon earth spikes from the ground. Defensively, he can block, counterattack, or transmute a stone block to hide behind. His real strength is his alchemy, which he can use to transmute weapons. At any time, Ed can transmute a sword, a lance, or a hammer into his hands by simply clapping them together and yanking the weapon from the earth. And each of these has its own use. For example, the sword is great for quickly slashing at fast enemies, the long lance is useful in crowds, and the powerful hammer cannot be blocked, so it's perfect for smashing foes that try to turtle on you. Each of these weapons is situational enough that you'll find yourself quickly switching it on the fly to suit the enemies around you as you chain together powerful combo moves and dodge attacks. The only real pain about controlling Ed is his jump, which has a slight control delay on it and feels sluggish compared to all the fast-paced attacks and other goodies Ed can pull off.

Those goodies are found in the environment. Scattered around the various levels you'll see items outlined with a flashing circle. These items can be transmuted into specific tools, and an icon above the item shows what tool it'll turn into. The type of tool varies by room, but there's everything from bow-guns, to machine gun turrets, to gauntlets, to boomerangs, to vacuums (which gather up nearby enemies), to trash can lids that stun foes, to giant tanks you can use to both shoot and roll over enemies, to mechanical mice that explode, to throwable bombs, and much more. There are weapons you can pick up and equip; there are stationary items; there are weapons you can man and aim manually; and there are items like the tank, which you can actually roll around with. Piled on top of all the other things you can do in combat, these tools are really handy and are often very useful. And some of them are just plain amusing to use. The variety of articles you can transmute is very true to the spirit of the show, and it mixes up the action nicely.

And then there's Al. Your brother Al isn't directly controlled by you; he's instead guided by his own artificial intelligence and some very basic controls. Left to his own devices, Al will follow you around a level. If he happens to be near some enemies, he'll run up and initiate combat with them. You can either order him to execute a charge attack toward any enemies he's facing, or you can call him to you. If you hold the call button down, Al will toss you into the air upon reaching you, letting you access high areas. Or, if your rage meter is full (below Ed's health; it fills as you sustain and inflict damage), you can press circle at the apex of the toss to summon stone fists from the earth that will smash everything around you. Most of the time, you'll be able to leave Al to his own devices, though sometimes his auto-attack AI will draw him into troublesome situations, after which point you'll have to repeatedly call him out or heal him with items. Frankly, aside from the mighty rage attack, the best thing Al is good for is mindlessly tanking your foes. Letting a boss munch on Al while Ed attacks from behind can be a good strategy in some cases. While Al doesn't do a whole lot, at least you don't have to worry about losing him, because if his health drains to zero, Ed can transmute him back to full health. Lest you're tempted to do that very often, though, be aware that the rage meter resets if Al dies. Consequently, you'll have to babysit your younger bro just a tad.

There are even a few situations where you'll have some of your state alchemist friends fighting alongside Ed and Al. The gun-toting Hawkeye, the flame alchemist Mustang, and the brawny Armstrong are all characters that join you at certain points during the game. You can't control them at all, unlike Ed or Al, but they generally manage to keep themselves out of trouble while dishing out some helpful damage of their own.

As you progress, you'll be earning experience through defeating enemies, as well as earning bonuses that are awarded for any lengthy combos. When you gain levels, you'll also earn bonus points that you can distribute to the brothers' stats as you wish. In addition, you'll also be able to increase your transmute powers as you go (like transmuting two stone slabs at a time instead of one, or equipping two gauntlets at a time instead of one), and you'll find accessories you can equip to further boost the characters' stats. Remember that you'll need to keep advancing your characters, because many of the bosses you fight tend to have nasty abilities that will push your alchemical skills. Fortunately, though, a wealth of health potions drop throughout the game, so you'll be able to use them liberally if you get into a tight spot.

The visual style of the game has changed somewhat over its predecessor, and it sports a new anime-shaded look to the characters that gives them the appearance of having popped fresh out of the cartoon. The characters animate fluidly in battle and have a really nice look to them. The environments span the reaches of dark mine shafts, sewers, haunted villages, castles, and more. And while they aren't meticulously detailed, they have lots of wide spaces to get into good battles in. The enemies you'll face don't vary a whole lot, so count on beating up a lot of thugs, chimeras, and dark golems on your way. There's even some unique animation, done expressly for the game, inserted into some of the many story sequences. There's no Japanese language option in the game, but the English voice work is done by the same cast that voices the cartoon show, and the quality is very good. Solid, meaty sound effects and some nice music round out the sound package.

It's a little too bad the game is, all told, pretty easy and a bit on the short side (10 hours and over is a generous amount of time to finish it). However, it's definitely a decent ride while it lasts, and there's even a "New Game+" option that lets you keep all your accessories as you tackle the game again.

One play-through is probably enough, but Fullmetal Alchemist 2 is a nice little action game and a quality piece of fan service for those who are way into the source material. The many transmutations are fun and useful, and the game is faithful to the show's look and spirit. If you're into Fullmetal Alchemist and are looking for a good diversion, this game should help you scratch that itch. 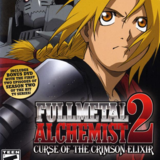