Faster Than Light might not look like much, but she's got it where it counts, kid. This spaceship simulation may look like something from the golden age of 16-bit gaming, but it offers a good deal of fun and depth. Unlike space sims that make you feel like you've had your head jammed in a Jefferies tube during an ion storm (if we can mix sci-fi franchises for a moment), this lighter entry in the genre combines an endearing retro feel and an even more endearing $10 price tag with gripping gameplay packed with tough choices and frenetic combat.

What first strikes you about Faster Than Light is how old-fashioned it looks and sounds. Graphics are intentionally pixelated, particularly the big, blocky text used to provide ship information and menu options. The game consists of just a couple of screens. You spend most of your time looking at an overhead schematic of your vessel seen in front of a spartan backdrop consisting of a planet, nebula, asteroid field, or whatever other scrap of intergalactic real estate dominates the star system that you are currently exploring.

The only other main screen to note governs upgrades to your ship's core systems and how to equip weapons and other gear. Very little is animated, aside from dinky crewmen puttering around inside your ship and various rockets and missiles being blasted across the void between you and the many enemies that you encounter during your travels. Audio is limited to various booms and bangs, and to the mono bloops that served as the primary musical accompaniment to games in the '80s and '90s.

It doesn't take long for Faster Than Light to get its hooks into you. The main theme blends elements of Elite and Rogue into a space sim that plays like an old-fashioned dungeon crawler with randomly generated rooms and encounters. Here you play as the commander of a ship called the Kestrel in the only mode of play, a zippy single-player campaign geared to be finished in one or two sittings.

This plucky vessel is on the run from Rebel forces in possession of a secret that must be brought to the good guys within the galaxy-ruling Federation. What is this dire secret? It never comes up. Plot isn't a strong point here. But it doesn't matter, because all you need to know is that you've got a Rebel fleet gunning for you and a bunch of unexplored star systems spread throughout a string of sectors to check out if you're going to come up with the fuel, weapons, and gear to make it all the way to the Feds on the other side of the galaxy.

Gameplay has a pulp sci-fi feel. You're a cross between Captains Solo and Kirk, exploring strange new worlds while also spending a lot of time doing the "pivot at warp two and bring all tubes to bear" thing. Just about every star system features an encounter where you come up against an enemy, meet traders, check out a space station, or something similar. Systems are divided into sectors, most of which come with themes where they are loaded with nebulae, controlled by pirates, or feature something else that is undoubtedly hazardous to your health.

You gather or buy weapon upgrades, various ship gear and crewmen, and the scrap that you need in order to upgrade your ship. Ship development is handled like a role-playing game character: you put scrap points into enhancing the main reactor, shields, life support, sensors, and so forth. There is a great balance between improving systems and improving the reactor, because advanced systems mean little without the power to drive them. You are on a constant seesaw deciding how to spend your scrap to make for the most efficient ship, as all these systems give you offensive and defensive ratings and abilities that are crucial in battle.

Ship development is incredibly important, because combat is a constant threat. You can drop into a system and find friendly traders selling equipment, helpful scientists, or even just a relaxing empty vacuum, but you're more likely to run into a rebel ship, pirates, or evil aliens. Battles run in pausable real time, with you in control of all ship functions and crewmen. All ships in the game are shown with dedicated rooms housing systems like shields, weapons, engines, sensors, and oxygen. So you target your weapons at these facilities on enemy vessels while the bad guys focus in on the same ones on yours.

All these choices give Faster Than Light a lot of strategic weight. You constantly have to make tough calls on which enemy system to attack and which of your own systems to repair. Do you take down the enemy shields to try to finish off a foe quickly, or go after his weapons to keep him from imploding your hull and then whittle him down at your leisure? You also have to make tough calls on what weapons to use. Missiles, for instance, can go right through enemy shields, but you have a limited number of them available and infrequent opportunities to restock, so you have to use them wisely. At the same time, you have to make the same calls on what systems to repair on your own ship when you take damage, as everything needs to be fixed manually, and you never seem to have enough crewmen to take on everything. Do you restore the shields? Do you get the weapons back up? Do you tackle those fires in the sensor room? Do you curl up in the fetal position and cry?

Everything is fraught with tension. Weapons seem to take forever to recharge during battles. Foes are cunning in what systems they target with their beam weapons and missiles. Fires start in compartments, which cranks up the stress because you need to order crewmen to make with the extinguishers or open airlocks and interior doors to starve blazes of oxygen. Crewmen also have to deal with hostile boarding parties, who frequently beam over at the start of battles and start blasting away at your systems from the inside. Random elements can turn into instant death. Think you're just delivering drone parts for a guy you met a couple of systems back? Whoops, that depot is filled with insane scientists who are now tearing your ship to pieces. Think that system looks harmless enough? Nope, you warp in too close to a sun and get shredded by solar flares.

And to top it all off, the Rebel fleet is always on your heels. You can enter a system occupied by the pursuing fleet, but this results in a pitched battle where all you can do is try to survive while your warp drive powers back up. Encounters tell their own stories, so you write a personal space saga via your exploits (which often consist of brutal but colorful deaths). The game might look and sound primitive, but it's also memorable and refreshing as you build your own adventure instead of following canned dialogue and set-piece plot points.

A few limits get in the way of playing space scoundrel. After a couple of hours, you realize that there are a fairly small number of encounters in the various star systems. All of them are randomly mixed up for each new game, but this just changes up the order in which you see them. This makes the game predictable after a while, although encounters move fast and the combat is exhilarating, and things are a little freshened up over time by such things as unlocking new vessels to pilot.

The game is tough, even on the easy difficulty setting, and some of the random elements are a bit too random. Games seemingly hinge on throws of the dice at times. You can hit a stretch where encounters offer nothing but brutal combat with fierce enemies that offer up little loot, or get a string of traders who have virtually no good items for sale. At the same time, you can hit the jackpot and have great luck with the encounters you draw, and stock up big on missiles, gear, and scrap.

Battles get long in the tooth in the later stages of games. At this point, tension can give way to a bit of boredom. Having the Rebel fleet on you so quickly gives the game a tight time limit. Being able to turn off the fleet, or dial back its pursuit so that it isn't constantly on your exhaust, could have made the game more enjoyable for those who want to play explorer. The limited save system might also be tough to get used to, because it's here solely for use when the phone rings or when nature calls. You can only save and exit, and this lone save is wiped out as soon as your ship is destroyed. Thankfully, everything moves so swiftly and is so compelling that you don't mind starting new games. But this style of perma-death play does require a certain mindset to fully appreciate.

Undeniably old-fashioned yet still somehow fresh and original, Faster Than Light is a great new take on a couple of old genres that will take over your life for many, many hours. Tense combat, easy-to-handle ship management, and fast-moving campaigns make this a game that is far more than the sum of its parts, despite a few shortcomings with mission variety and the remorseless nature of the (mostly) save-free game design. 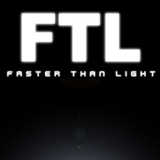 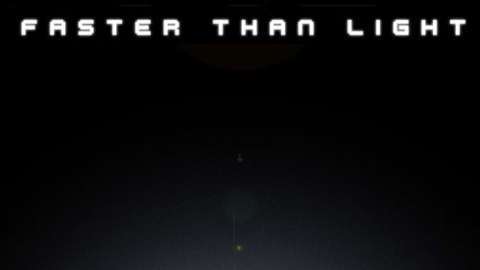