Blowing stuff up is the only enjoyable part of Front Mission Evolved, a mediocre third-person shooter featuring giant mechs.

Masking mediocrity by letting you blow up lots of stuff pretty much sums up Front Mission Evolved, a forgettable third-person shooter from Double Helix Games. The latest addition to the Front Mission family of tactical role-playing games may take this Japanese series in a new direction, but the old turn-based style of play has been replaced with an assembly-line shoot-'em-up that won't win the franchise many new fans. While the action is sufficiently bombastic, with giant mechs, gun turrets, and tanks constantly going boom, it's tough to get through the predictable, abbreviated campaign without snoozing. And the multiplayer is a bland assortment of games that will likely bore you long before you've explored it fully.

The story and setting are borrowed from the previous Front Mission games. The plot is a standard revenge saga featuring Dylan Ramsey, a civilian thrust into a war to find out what happened to his scientist father. It's hard to get into the story or to want to find out the identity of the mystery man behind an insidious plan to start a global war, because your suspension of disbelief is derailed by cornball villains who do everything but add "Muahahaha!" to the end of their cheesy dialogue. The setting is at least somewhat intriguing. The timeline has been pushed forward into the later 22nd century, a leap forward from the earlier releases in the Front Mission franchise. Most of the big players remain the same, however, with the geopolitical landscape still dominated by feuding supernations. The world of 2171 actually looks a whole lot like our own, right down to the cars that people drive, but futuristic touches like space elevators make it clear that we're a long way from 2010. It would be interesting to see this sci-fi saga explored more thoroughly in a more interesting game. There are some good moments, though they don't amount to much in the end. You can wrap the whole turgid tale in an evening or two of play, which barely gives you enough time to care about the protagonists.

Most of the action takes place with you at the controls of a Wanzer, Front Mission's not-so-unique take on battle mechs. These massive war machines are pretty typical for the giant robot genre, boasting projectile and melee weapons along with thrusters that let them skate along at high speeds. For giant killer robots, these Wanzers are pretty nimble and can be maneuvered much like they were plain old human beings. You can even get into toe-to-toe scraps and give enemies the back of your giant metal hand. Wanzers can also be specially outfitted with weapons and other goodies purchased with cash earned out on the battlefield. Customizing your ride isn't all that rewarding, though, as tight power and weight ratios make it hard to come up with an interesting loadout. The game also regularly forces you to use specific equipment for certain missions, such as hover thrusters and spider legs, taking the decisions out of your hands. In addition to the giant robot action, you're occasionally dumped out on foot to fight with a couple of rifles and grenades, and you also take part in a couple of shooting gallery sequences where you blast enemies from the air.

But no matter how you fight, combat has been stripped down to basics. Campaign levels run on rails, and from start to finish you simply blast everything that moves. Many missions see you fighting alongside allies, although you can't do anything with them, such as send them after specific bad guys. You're outside most of the time, of course, as giant robots don't exactly fit inside buildings, but most maps consist of generic corridor crawls. Dull, boxed-in highways and urban streets take the place of shooter hallways. Pyrotechnics are suitably intense. Everything blows up in impressive ways, particularly when you backhand an enemy into bits with a melee strike. Thunderous atmospheric audio adds to this, making great use of a subwoofer if you have one, and the shock effects during fireballs practically vibrate the gamepad out of your hands. But the satisfying impact of these explosions soon wears off. Seeing a few giant mechs go boom is kind of thrilling. Seeing a few hundred go boom mind-numbing. The action also bogs down during boss battles. Enemies are absurdly overpowered when it comes to armor and take forever to be whittled down to destruction. But at the same time, weapon and health power-ups on boss battlefields continually regenerate, making it just about impossible for the big bads to kill you. These titanic tussles can take a half hour to finally crawl to a halt, slowing the campaign so much that you want to just give up on the whole thing.

Multiplayer comes with basic shooter game types like deathmatch, team deathmatch, domination, and supremacy, along with an experience-point system where you earn ranks over time. There isn't anything here you haven't seen before. Sure, you're dealing out all the death at the controls of a giant robot instead of at the end of a soldier's rifle, and some of the maps feature cool space stations and futuristic cities for backdrops. But other than that, this is the same multiplayer found in many other console shooters. The only noteworthy difference here is length. Matches are structured to keep you playing for a long time, particularly domination, where the need to earn 1,000 points to win a standard match can keep you glued to the couch for going on half an hour. You'll also be playing for ages if you want to move up in rank. Experience points aren't doled out by the bushel for kills and wins, so expect to put in many, many hours if you want to get into the high ranks.

Front Mission Evolved isn't a step forward for the Front Mission series. Double Helix Games is treading water here with a very beige third-person shooter that doesn't do anything particularly well aside from explosions. Try it only if you're a huge devotee of the old series or are a big fan of blowing things up real good. 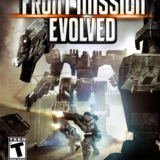 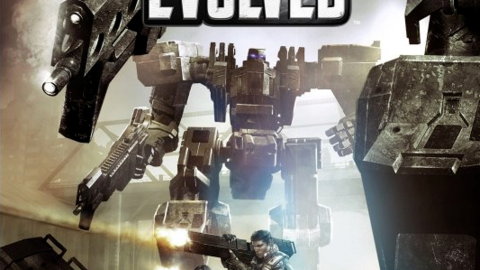