While there may be no star signings in this year's Football Manager, there are enough incremental improvements to keep it at the top of the table.

Last year, Football Manager received its most significant and obvious innovation in some time: the introduction of a three-dimensional match engine. Sadly, the engine was a little rough around the edges, and the rest of the game wasn't innovative enough to make it a must-buy for fans of the series. This year, however, that new engine has been improved significantly, and sits at the heart of a game that's stronger than ever, thanks to a host of other improvements across the board.

The core gameplay is unchanged. You start in control of your chosen club as the pre-season kicks off, and then have to set about managing your squad through the upcoming seasons. First off you have the option of watching your squad play a training match so you get a handle on both the players and, if you're new to the game, the match day controls and nuances. Your assistant manager helps via useful pop-ups to guide you through the nuances of player interaction, and can even pick your team and set the formation for you if you're feeling a little lost.

While there is nothing quite as major as a new engine in this year's game, there are plenty of refinements to every area of Football Manager 2010. The most obvious upgrade is the game's overview screen, which brings together your news feeds, in-game mail, upcoming fixtures, league tables, transfer information, and a summary of your current squad status. This is a vast improvement over previous home screens, which traditionally focused on your mailbox. The old mailbox still exists as your hub of interaction for much of the game, providing your means of interaction with your fans, management, players, and the press, and is little changed from previous iterations.

The help and assistant-management systems have also been improved. The game is more approachable for new players, while those who are familiar with the series can become more involved than ever before. This is no mean feat given the absurd depth that the series is known for, and it makes the game stand apart from its competition. The help system also makes it easier to appreciate this depth. You have a wide range of backroom staff to call on, and your assistant manager tells you where there are gaps in your staff so you can hire the right people if you feel you need it. These staff members help guide you through the nuances of your squad in a manner that will be much more natural to newcomers than poring through tables of statistics, but those people who live for statistics can do without many of them, leaving more money to be spent on players.

Thankfully, you don't need to spend time concerning yourself with this level of detail if you don't want to. If you elect to manage Chelsea with their full skilled backroom setup, you'll end up with a very different set of challenges than you would managing a troubled, struggling Championship side such as Newcastle. Further help comes in the form of an improved transfer and scouting system. You scout for players in much the same way as before, but the way that individual player reports are presented makes all the information much clearer. This allows you to make an informed choice over signings more easily than in previous iterations. As well as making the general experience more satisfying and engaging, it makes it easier for you to delve into unfamiliar leagues or countries.

The 3D match engine that debuted last year has received a new coat of paint and now both looks and plays significantly better than before. Your teams play in a range of venues that all have stands populated with cheering fans. While the improved match engine still looks downright ugly, it doesn't suffer from any of last year's minor glitches, and there is now a range of stadia, complete with fans, that you'll see your teams play in. Football Manager 2010 has also received a significant gameplay addition during matches--you now have the option to change your general tactics on the fly and shout specific instructions from the touchline without going back to the main tactics menu. This can be done on the basis of what you see happening on the pitch, the wealth of statistics you can cluster around the play area, or your assistant's in-game analysis of your team's performance. This makes it more fun and engaging to watch matches play out, because you feel more in control of the way the match is progressing. You can also tell players to switch position via another set of options accessible from the match-day TV view rather than having to go into your main tactics menu to lay out new tactics on your virtual chalk board. The main menu options are still there and are still needed when you want to make mass substitutions or make wholesale tactical changes, but the addition of touchline interaction works very well.

The lack of music or an in-game MP3 player for your own tunes is something of a shame. The amount of time you can spend poring over statistics and watching loading screens would be made much more enjoyable with customisable music, especially since the amount of data presented onscreen does not lend itself to running in windowed mode. The crowd effects could also do with a little more variation; while it's great to hear the crowd cheer at your goals or gasp as you rattle the woodwork, it does seem rather out of place during an intra-squad training game.

Football Manager 2010 is the closest you're likely to come to managing not only the club of your dreams, but almost any professional football club you can imagine be it a Premiership high flier, a new franchise in the MLS, or a team struggling in Japan's second division. While none of this year's additions are revolutionary, they result in a game that adds depth for veteran players while also becoming more accessible for newcomers--it's a great game that's accessible to anyone with the slightest interest in football from any corner of the globe. 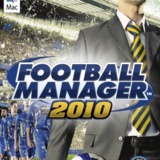