Football Manager 2008 moves the series on for old and new players alike.

Football Manager 2008 is one of those rare games in that it knows exactly what it's trying to do, sticks to that plan religiously, and does it very well indeed. It places you as a fresh-faced manager in charge of almost any professional team in Europe, with control over everything from season ticket prices to your player's individual training schedules and match-day tactics. You can control your team over as many seasons as you wish, with new young players being generated by the system to keep it fresh until the next database update. You can play in an attempt to get yourself the best management job you can, start as an unknown, or just for the glory of the team. It's entirely up to you.

Every year the game gets fractionally better by drawing on input not from an isolated development team working out what features they feel would be impressive, but from a massive range of sources both inside and outside of the professional football world. Financial changes were influenced by football league chairmen, transfer negotiations and options by agents, and the interface by a small army of usability testers. The result in this year's game is not only still the gold standard for sports-management games, but also a significant step forward for the series.

For once, this improvement isn't going to be noticed only by experienced players of Football Manager; the usability and interface changes are aimed squarely at those who have never played the game before, or who lost interest many seasons ago. In this vein, a significant amount of work has been done this year to revamp the interface into a much sleeker "Web 2.0" style, as well as to add a host of other usability changes based on extensive testing. The interface now has many more graphical options and icons (rather than just imposing text lists), and buttons are duplicated in sensible places to minimise mouse movement and better relate to player interaction.

With a similar goal in mind, the new advisor system is likely to improve the experience of first-time players. This is a contextual help system akin to Microsoft Office's infamous paper clip. It works due to the fact that it is very easy to turn off in full or in part, given that it can be deactivated on a topic-by-topic basis. This provides useful information on every aspect of the management process as issues arise. It's clearly aimed at new players, but will be of interest to anyone who doesn't feel as if he or she is quite making the best use of the wealth of available options.

Despite these changes aimed at new players, there has been no dumbing down of the game's depth at all. The database has information on around 300,000 players and staff, and consequently the option exists to see any match played in the match engine. This can give you tactical insights into your future opposition, considering that you can go to any game to see firsthand who's likely to give you problems, rather than just relying on the reports you automatically get from your scouting teams.

One other feature that's been added as a result of player feedback is the ability set your own pitch dimensions and react to those of clubs you visit. It's a minor change, but its realism is indicative of the way the game works as a whole.

Another feature that is new this year and that will be of particular interest to first-time players, as well as those looking for the challenge of managing in unfamiliar leagues, is the new coaching-report system. You can now ask any member of your coaching staff to give you an overview of any player in the squad, which lets you know instantly not only his best positions, but also how the player fits into your squad, how he's viewed in terms of his current performance and prospects, and all other aspects of his footballing makeup. However, the changes aren't just for new players. As happens every year, the game has moved that little bit closer to reality; although it might not matter to a first-time player that win bonuses are now done by squad rather than player (as in real life), it's the little touches that add up to the great game that is Football Manager 2008.

There are other little details that add to the overall feel. When the game is processing each day's action, you're not presented only with a loading bar, but rather you receive updates on results as they come in. You also get a selection of domestic statistics that might be of interest, be they winning streaks, goals conceded, or other trivia. Whether such information is useful depends on your playing style, but its presence is a nice touch. The game's news feeds are also good in this respect. You get reports, as standard, on every competitive game in which a member of your squad participates, with a round-up of the game and his performance, whether it's for your reserves or youth team, or on any international stage.

Financially there's now more (and more detailed) interaction with the board than ever before. You can negotiate funds for the season based on your expectations, but be prepared to face up to life on the streets if you fall short of the story you've sold to your board. One neat feature in this vein is the ability to move around the money allocated by your board for the season; if you're underspending on wages but need to increase your transfer war chest, it's now possible to simply move money from one pot to the other.

It's not just the board that gives you feedback, either; this year you've also got the option of hearing what the fans have to say. Although the fans can be rather fickle, and have a tendency to carp on about seemingly insignificant matches for too long, their views do provide an indicator of where your club should be, irrespective of the views you've presented to the board--and keeping them happy is key to ensuring revenue from ticket sales.

Nevertheless, the game is not without its flaws. The limited number of responses from announcer pundits can grate a bit after a run of similar results, and you don't have quite the flexibility in staff that you might like. For example, as a big club, you cannot raid a smaller club for its manager to act as your assistant. Network play returns, but is generally untouched from last year's game. Essentially, a human opponent can simply take over for one of the hundreds of other teams being controlled by the AI. It's an OK feature, but not the sort of robust multiplayer functionality you might be hoping for. This, along with the simplistic graphics (even with the interface's new skin), may be enough to put off the uninitiated. The match engine is still in near-2D, and though some may say this adds to the game's charm, it is now starting to look very dated. Additionally, Football Manager still almost entirely lacks sound outside of match days, and one feels that though the game might not benefit from its own music, the addition of some optional sound effects and a media-player remote would be welcome.

Overall, Football Manager 2008 is a worthwhile upgrade for long-term players, and a much more accessible experience for those who have been put off by the scale of this truly massive game. 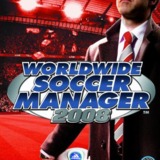 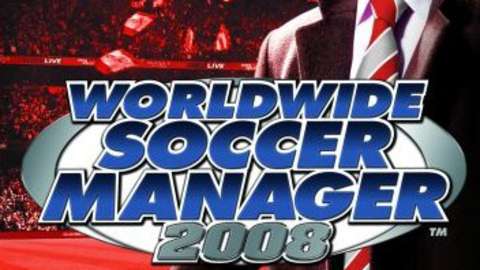 Worldwide Soccer Manager 2008 brings the franchise back for another year of satisfying your micro-management needs.