Fire Emblem: Shadow Dragon is a remake of the first game in the Fire Emblem series, which until now has never been released outside of Japan. It successfully emphasizes strategic depth and replayability by including numerous tactical control options and new multiplayer features. It's also immensely challenging, though not unmerciful, providing a forgiving learning curve through new tutorials that appear in the new prologue sequence. Great stylus controls and refined visuals further enhance the gameplay, making this classic a highly satisfying and intense journey.

You're cast as Marth, the young prince of Altea, who is thrust into battle when a political ally assassinates his father. He soon discovers that the evil shadow dragon supposedly defeated by one of his ancestors is now enslaving the land. Swearing vengeance, Marth embarks on a quest to free the people and kill the shadow dragon. Though the plot is occasionally confusing, a sophisticated translation and a new prologue segment explain the events.

Combat occurs on an impressively large grid-based battlefield. The top-down view is displayed on the bottom screen and is littered with shops, castles, and tiny villages that you can conveniently visit mid-battle, which is advantageous, because it means you don't have to wait for intermissions between battles to manage your army. The field contains multiple terrain types, such as water and forests, which promotes strategic play, because the different terrains affect your army's movement range. The top screen houses a useful map detailing the position of all units, friend or foe, along with valuable character information that is vital to planning your battles, because the intelligent AI keeps you on your toes. The stylus controls are comfortable and precise, enabling you to quickly scroll through the battlefield and cycle through units with a simple tap of the stylus--a feature many strategy RPGs struggle to incorporate well.

The turn-based battle system is simplistic, but it challenges you to strategically position allies so you can attack without being immediately eliminated. Battle initiates a combat sequence in which a pleasing, 3D-styled graphical representation of the fight is displayed on the top screen. The winner is usually determined by a basic weapon triangle that functions as a rock-paper-scissors mechanic. For example, lances best swords, while axes best lances. There aren't many special attacks or tricks implemented to modernize combat, but the action remains thrilling because of key dialogue events, pivotal on-the-spot plot decisions you're forced to make, and the valuable soldier recruiting you perform on the field. These important decisions and events greatly enliven the experience, while new recruits are an invaluable resource because they further the story and bulk up your army.

The game is incredibly addictive due to its strategic depth and ability to keep you thinking ahead. Fire Emblem's units suffer permanent death, which forces you to carefully consider every tactical maneuver you make. This system is rarely frustrating, because it's appropriately counterbalanced by a handful of save points on each map, which you'll have to closely ration because each point can be used only once. Enemy reinforcements also apply constant pressure and make it more challenging to figure out which units you need to take into battle at the outset.

An array of satisfying tactical options gives you complete control of your army. And an organized, easy-to-use battle preparation screen, where you purchase goods, modify weapons, manage inventory, and change a unit's class, is key to success and encourages you to play strategically even off the battlefield. There are more than 30 classes available, including pegasus knights and sorcerers, which provides an interesting variety. You're also given a preview of the next map as well as all enemy units already positioned on the field, which lets you view their weapons and make adjustments before jumping into the fray. This is invaluable, because the outcomes of battles are often determined by the participating units' weapon choices. Though this high level of micromanagement could easily overwhelm you, the tutorials do a good job of easing you into the gameplay.

Battles offer a compelling challenge, but the game is rarely punishing. If you're suffering serious unit losses and can't progress, you have the option to enter a new side chapter to recruit more soldiers. You also want to keep an eye out for special arenas, where you can enter units to score much-needed experience and cash. Though the normal difficulty is sufficiently challenging without crippling you, there is just one caveat: Most new recruits begin at a much lower level in comparison to the rest of the team. This becomes a hassle because there are few opportunities to train your weaker units, which makes losing your more-experienced regulars exasperating.

Fire Emblem: Shadow Dragon's substantial multiplayer component spans both multicard wireless and the Nintendo Wi-Fi Connection. Both types restrict you to a five-unit squad, which makes for speedier fights, but unfortunately you're restricted to just one game type. Appropriate level matching is also sorely missing. Outside of battling, local wireless allows you to borrow units from friends for your single-player campaign, which could be a potential lifesaver if you're stuck. Similarly, you can borrow units and battle with anyone over the Nintendo Wi-Fi Connection, though a real highlight is your access to a special armory with prized gear. Battling online with friends allows you to talk to one another via the DS's microphone, which is a neat feature that many games overlook.

The game is much more visually refined than its Famicom incarnation. The 2D battlefields showcase highly detailed terrain and sprites, while classy, hand-drawn artwork enhances both cutscenes and character portraits. The 2D attack animations are superbly animated in a 3D-rendered style; however, they do sacrifice intricate detailing for smooth motion. The music, which provides a fitting backdrop for intense battles, is a little dated but carries the action well.

You should be able to complete all of the game's 25 chapters in roughly 20 hours, but you can expect to spend an additional hour or two mastering key fights. An unbelievably difficult "hard" mode is also included to encourage another play through, while the multiplayer modes should prove to be fun diversions. Fire Emblem: Shadow Dragon may be a straightforward traditional strategy RPG, but there's beauty in its stark simplicity. If you're looking for a challenging and rewarding strategy game, Fire Emblem is a very good candidate. 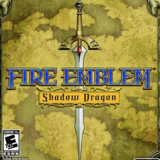