With a terrible plot and an unforgiving difficulty level, Radiant Dawn is best left alone by anyone but the most hardcore of strategists.

The Fire Emblem series of strategy role-playing games is best known for two things: deep, compelling stories and challenging tactical battles. War-devastated nations, subtle political machinations, and young heroes who rise to the occasion of defeating abject evil to save their people have all been hallmarks of the epic stories that take place, and Fire Emblem: Radiant Dawn attempts to follow this tried-and-true storytelling method but somehow gets mired along the way. This is despite the fact that it's a direct sequel to the GameCube's Fire Emblem: Path of Radiance, which had one of the strongest stories of the series. The strong tactical-combat system is thankfully intact, but the difficulty has been bumped up so high that it at times becomes infuriating, and the end result is a game suited only to hardcore fans of the series or of strategy RPGs in general. If you haven't played a Fire Emblem before, this is not the game for you.

As previously mentioned, Radiant Dawn is a direct sequel to Path of Radiance. It takes place three years after a brutal war in which the nation of Daein and its mad king, Ashnard, attempted to throw the entire world into chaos to free an imprisoned dark god. Ironically, the game begins in the heart of Daein itself. You will take command of Micaiah, the so-called "silver-haired maiden" of the Dawn Brigade, a friendly band of Daeinish rabble-rousers who fight the oppressive Begnion Empire that now occupies their homeland. Throughout your journey, you will encounter many of the allies you met in Path of Radiance--most of whom will once again fight on your side--as well as a cast of entirely new ones. With your army, you will battle a series of villains that are for the most part so laughably one-dimensional that they might as well be cackling while tying young damsels to railroad tracks and twirling their handlebar mustaches. For a series known for its detailed backstories (particularly those of its villains), these knavish ruffians, who act like they're evil because it's the new black, are severely underwhelming and disappointing. To Radiant Dawn's credit, the story and quality of villainy do improve later in the game, but chances are you wouldn't give the story long enough to really develop if that's why you were playing it in the first place.

The game is divided into four parts, each of which provides a different perspective of the events unfolding--unlike the previous game, Radiant Dawn has no set main character, and it's not uncommon for you to have a different army with a different leader from chapter to chapter. Each chapter consists of a battle or series of battles, and it is in these fights that the vast majority of your time will be invested. Battles feature a variety of goals, such as "defeat all the enemies" or "survive for x turns." They even manage to put a new spin on traditional objectives, such as one mission where you must work alongside an artificial-intelligence-controlled ally and protect its units until they arrive at a specific spot. Like in many strategy RPGs, you will begin combat by selecting which of your units you wish to field onto a grid-based isometric arena, and then fight by taking turns moving and attacking your enemy.

However, unlike in other similar games, each of your units are unique characters that have their own stories and motivations, and they'll die permanently if not carefully guided. To this end, Fire Emblem continues to be more strategic than its peers because you're less likely to take risks that endanger your soldiers. That said, be prepared to restart often because your soldiers will die frequently: Radiant Dawn is easily the most difficult game in the series thus far. Where in previous games in the series the vast majority of your troops could easily take one or two blows and live to tell the tale, you will have no such luxury here as, particularly in the early parts of the game. Your soldiers are for the most part weaker than ever, and the slightest of miscalculations will end in tragedy, even on the easy setting.

Although some may see this as a boon, the difficulty ventures beyond the realm of challenging and into the bitter waters of maddening, and it will easily overwhelm even experienced tacticians. The ability to save in midbattle is a welcome new feature that helps to mitigate the punishing difficulty, but because you are essentially forced to rely on it all of the time, it cheapens the overall experience greatly--unless you like the idea of starting entire battles over again upward of seven times until you can complete them without losing precious allies. There are three difficulty settings, but as previously mentioned, even the easy setting is extremely tough.

As is standard, there are dozens of types of units that you will recruit into your ranks throughout the game, each of which has a different weapon specialty that fits into a rock-paper-scissors combat system: swords trump axes, which trump lances, which trump swords. Magic-wielding units work in a similar way. The laguz--beast-men that can shape-shift into full animal forms--make their return and are thankfully more useful than they were before, but they still play second-string to the various human warriors you will command. Between battles you will generally be able to buy and sell weapons and equipment, learn new important information, and award bonus experience earned in your missions to help level units. As in previous Fire Emblem games, you can pair up your units to earn stat bonuses when they are near one another. The big payoff has always been the often hilarious or backstory-developing conversations between support pairs, and these have unfortunately been reduced to mere battlefield chatter. But considering how uniformly awful the dialogue is, this can be seen as a mixed blessing.

In terms of presentation, if you played Path of Radiance, you've essentially seen everything Radiant Dawn has to offer. Though there are new and more detailed character animations, the overall quality of the game's graphics has had little to no improvement whatsoever. The infrequently seen cel-shaded 3D cutscenes are beautiful and incredibly well done, and it's a shame that the rest of the game didn't look more like them. The soundtrack is good but generally not memorable, and the sound effects are fitting and appropriate. One interesting feature is the ability to port over weapon levels and support relationships from a GameCube memory card that has a Path of Radiance save on it.

The biggest problem with Radiant Dawn is that it proves just how firmly rooted Fire Emblem is in its ways; it makes absolutely no effort at all to adapt and change from its predecessors. Despite being a Wii game, it doesn't make any attempt to use any of the system's strengths, such as Mii support, online support, or motion controls and pointing, even though the advantages of such integration should be plainly obvious. There is almost no voice acting, save for the uncommon cutscenes and painfully terrible after-chapter narrations done by Captain Obvious, who repeats everything you just learned in a poorly imitated Movie Trailer Guy voice. Finally, the series' chosen storytelling method--putting sometimes-animated character art over a static background and bombarding you with text--comes across as played out as well. Without any way of tying one stationary backdrop into another (given that cutscenes are so rare), events often occur inexplicably, such as one case early in the game when Micaiah is in a forest one moment and in a prison the next.

Ultimately, Fire Emblem: Radiant Dawn is a huge disappointment. It seems that nothing was learned from the making of Path of Radiance, and as a direct follow-up, Radiant Dawn can't even live up to its predecessor's epic story. The walls of text and unforgiving difficulty level will do nothing but alienate and discourage newcomers and even some veterans, which makes it a game purely for the hardcore crew who are dedicated to the series or the genre--anyone else need not apply. 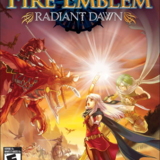