Fire Blade is a surprisingly good game that will more than satisfy helicopter combat fans.

The last helicopter combat game that was released for the PlayStation 2 was Eidos' Thunderstrike: Operation Phoenix, and while it was well received, it met with some criticism for forcing you to play a little too cautiously. Fire Blade is a similar game, for the most part, but it offers a much more action-packed experience that makes it more of a traditional arcade shooter than a simplified simulation. The game's use of first-person shooting sequences and other unusual gameplay elements, such as the helicopter's cloaking device, makes Fire Blade an interesting and involving game to play.

The story in Fire Blade closely resembles what is happening in our world today. The essence of the story is that a number of Western nations have formed an antiterrorist military force called Fire Blade, whose sole mission is to stop terrorist activity around the world. The biggest threat facing Fire Blade is an organization known as the United Eastern States, which is believed to be in the process of creating training camps for its forces and production facilities to create weapons of mass destruction. As the pilot of the world's most technically advanced helicopter, you'll be taking on enemy forces in the air and supporting ground forces in the Western nations' campaign against the United Eastern States. The story is introduced by a narrator at the beginning of the game and really only comes into play in the form of cutscenes and narrative mission briefings in between each level. These sequences not only progress the storyline, but they also help you understand what you have to do in each mission and why. You'll also get additional instructions and mission objectives during the missions over the radio.

Fire Blade features 18 missions divided into four main campaigns, and the campaigns will take you to the Swiss Alps, the Arizona desert, the Amazon jungle, and the Artic Circle. The missions range from standard seek-and-destroy operations that take you through an onslaught of enemy units to ops that require you to use stealth technology to sneak in and out of enemy bases without being detected. The missions can be really exciting. For example, one mission starts you out on a wide-open stretch of the Arizona desert that's covered with enemy units. The job here is to provide air support for a group of Special Forces troops who have to stop an enemy train. The troops commandeer a semi and park it on the railroad tracks, forcing the train to stop. Of course, while all this is happening, you're trying to keep these guys alive by blasting anything that comes near them. When the train stops, the squad of enemy soldiers on board tries to make a break for the semi in an effort to clear the tracks. Only by holding them off will you be able to complete the mission successfully. Unfortunately, not all the missions in Fire Blade are as interesting or well thought out as that one. Early on in the game, there are a number of missions where your objectives are pretty straightforward, like blowing up a radar installation or a couple of bridges. But for the most part, the missions are actually quite good.

You control your helicopter in Fire Blade using both of the analog sticks at the same time. The left analog stick controls the direction that your helicopter is facing and lets you fly forward and backward, while the right analog stick controls your helicopter's elevation and strafing. The shoulder buttons serve several purposes, including firing weapons, activating your chopper's sniper mode, and firing your helicopter's electromagnetic pulse weapon. Your helicopter is equipped with a minigun, homing missiles, rockets, the aforementioned EMP weapon, turbo jets, and a cloaking device. The buttons on the face of the controller activate your turbo jets and thermal vision and cycle through targets. A few of the buttons that activate the helicopter's weapons also perform alternate functions while you have the chopper's cloaking device turned on. For instance, the shoulder button that launches your homing missiles when you aren't cloaked changes functions when you are and instead fires the EMP weapon.

With the cloaking device turned on, and with your view zoomed in using your helicopter's sniper mode, the minigun becomes a powerful sniper rifle. Many of the missions call for troop support, in which case the best course of action sometimes is to turn on your stealth mode, thermal vision, and sniper mode so that you can easily clear out enemy infantry forces from afar. Some of the sniping missions have you in the game's first-person sniping mode lining up shots for a good deal of time, just as if you were a playing a typical first-person shooter. Other missions call for a no-nonsense assault on enemy strongholds and forces, and here the gameplay is all about avoiding enemy fire while delivering your own. The controls are very responsive, and while it'll take you a half hour to get accustomed to playing the game, you'll find that the gameplay is quite rewarding once you're used to it.

Visually, Fire Blade doesn't do anything we haven't seen done with the PlayStation 2 before, but the game does throw a whole lot of enemies at you at once without slowing down at all. The models and animations used for the vehicles, enemy infantry units, and buildings are simple, but they more than adequately serve their purpose, especially when you consider how many units sometimes appear onscreen at once. In some battles, it's not uncommon to find yourself facing somewhere in the neighborhood of 30 units at once, and they literally fill the screen with visible cannon and rocket fire. The environments range from wide-open valleys to narrow streets in fairly large cities. All the environments look quite different from one another and feature lots of different objects in the scenery that make them interesting to fly around and look at. The game also uses a good number of visual effects, like a blurring effect for when you've ignited your helicopter's turbo, or the thermal vision effect, which is very well done and actually makes it quite a bit easier to see enemy units. You can see all the action from a variety of third-person camera angles, as well as the first-person view.

The sound and score in Fire Blade are very well done and certainly add a great deal to the experience. The explosions of vehicles and missiles, the clanging of enemy fire striking your chopper, and the gruff voice of your commanding officer during the mission briefings are all first-rate. The musical score blends well with the game--it's very heroic and uplifting, much like what you might find in an action movie.

In the end, Fire Blade is a surprisingly good game that will more than satisfy helicopter combat fans. Its mix of gameplay--which alternates between stealthy first-person sniping and the classic frenzy of a traditional shooter, complete with more bullets than you think you can dodge and more targets than you think you have ammo for--really makes Fire Blade entertaining and exciting all the way through. 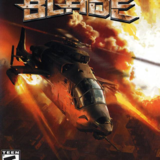 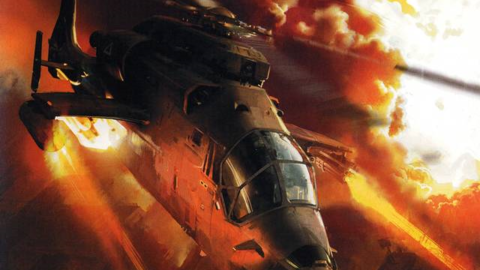 Fire Blade is an arcade chopper combat game, one in which you'll pilot an aircraft equipped with a whole bunch of fantastical combat and defense systems.