This isn't the best version of Final Fight you could be playing, but in a pinch, even a compromised version of one of the best brawlers ever made will do.

You want to play Final Fight. This is an inexorable truth. Final Fight is perhaps the single greatest side-scrolling beat-'em-up of all time, a near-perfect realization of the "gang kidnaps someone's girlfriend/wife/daughter/niece/random-damsel-in-distress so you go beat them all up" formula. Between some of the most memorable enemies in beat-'em-up history, a still-great combat system, a slick art style, and the greatest action-hero politician of all time, Metro City mayor Mike Haggar, you absolutely need to play Final Fight at some point in your life. However, the version of Final Fight just released for the Wii Virtual Console isn't necessarily the one you want to play. This is the compromised SNES version, not the arcade original. Still, even for all the details the SNES version mucks up, many of the core factors that make Final Fight so appealing are still intact, and you're bound to have a fun time with it, even in spite of its multiple blights on the arcade game's good name.

In Metro City, crime runs the show, until former street fighter Mike Haggar is elected into mayoral office. The Mad Gear gang, the primary force behind the crime wave, doesn't like Haggar's clean-up-the-city initiatives, and opts to kidnap Haggar's daughter. So, Mayor Haggar does what any good politician would do--he gathers up his daughter's boyfriend, a handsome martial artist named Cody, and hits the streets to beat the snot out of every Mad Gear that crosses his path.

And boy, is it ever fun to do so. Though Final Fight's combat system consists of the usual two-button control scheme that most brawlers from this era used, it holds up surprisingly well. Both Cody and Haggar can string together some basic attack combos, as well as pull off jumping attacks, grab attacks, and spinning maneuvers that prevent them from getting surrounded. There's more depth to it than meets the eye, and that the enemies you face come at you with such varying patterns of attack makes things all the trickier. Boss fights are challenging, lots of enemies pop up in every level, multiple weapons present themselves throughout the game, and you get to break barrels to find hidden barbecued meats that replenish your health. What more could you possibly ask for?

Well, you could start by asking for the version of Final Fight that came out in arcades, not the hacked-up SNES version. This is far from the ultimate version of Final Fight--heck, it's not even the penultimate version (that goes to either Final Fight One on the GBA, or Final Fight CD for the Sega CD). The differences between this version and the arcade original are numerous. First, Guy, the third playable character in the arcade version, isn't in this one. Second, it's missing one of the levels from the arcade game. Third, all the female enemies have been replaced with generic male punks (presumably because someone found the idea of fighting women offensive, though it was A-OK in the NES version of Double Dragon). Finally, in the most offensive of sins, the SNES version stripped out the cooperative multiplayer component. This is single-player Final Fight, which almost doesn't make it Final Fight at all. Half the fun of the arcade game was jumping in with a friend and beating up the Mad Gears together. The game is still entertaining when played by yourself, but it pales in comparison to playing side-by-side with a friend.

Still, everything else about Final Fight is basically intact here. The graphics are scaled back a bit, but still retain the majority of the excellent art and character designs found in the arcade game, and the soundtrack is still top-notch. All told, there is enjoyment to be wrung from this version of Final Fight. The price of 800 Wii points ($8) for a short beat-'em-up with no two-player mode is overly steep, but because it's a beat-'em-up ported from the best beat-'em-up ever made, the price to download is a bit easier to swallow. But if you really want the proper Final Fight experience, and a better overall deal to boot, go track down a copy of the original Capcom Classics Collection. 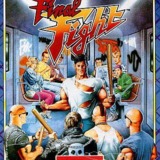