The updated graphics are pretty, but the chaotic leveling system and aged gameplay don't hold up very well.

Final Fantasy II's position in role-playing game history is a dubious one. On one hand, it bravely modified aspects of the original Final Fantasy and added a few new gameplay mechanics. On the other, the transformed leveling system was an exploitable and unbalanced mess, which makes the Anniversary Edition feel more like a case study in the evolution of RPGs than an entirely enjoyable game. You'll find plenty of random battles to ease your daily commute, but the frustration of the baffling skill leveling makes FFII a less appealing game than its predecessor.

Not all the changes from the first Final Fantasy are for the worse though. The story is more intriguing, though leading ragtag rebels through a series of quests isn't very exciting by today's standards. The quests are nicely set up, but you'll need to pay close attention to the dialogue because there's no quest log to remind you of your current goal. Another addition is a system of learning key words from non-player characters, which must be repeated to other NPCs to move the story along. These aren't huge improvements, but they're notable if you're interested in the evolution of the series and genre.

Final Fantasy II completely overhauls the leveling and skill systems of the original Final Fantasy. Rather than let you choose classes for your characters, you start with three characters that are more or less blank slates. They can use whatever weapons you want to give them and learn any available spells. In turn, as each member uses spells and weapons, he or she becomes more adept at using them. It's a lot of freedom, and on paper, it sounds like a great way to customize your party members as you see fit. In practice, it can be a disaster. For example, characters earn more hit points by taking damage, essentially forcing you to get beat up on if you want to increase your maximum health. Yet depending on your party formation, some characters will rarely be attacked in battle, which means their HP meters will grow much more gradually than others, and you'll need to mess around with your formation if you want to even things out. Or you can simply exploit the system completely by entering random battles then bashing other party members in an elaborate seesaw of attacking and healing. Alternately, you can head for the city of Fynn and exploit the guards there. Of course, you can do it the old-fashioned way by fighting progressively stronger enemies, but doing so is painfully ineffective and will leave you unprepared for boss fights, which can be surprisingly tough if you are caught unawares.

If you've already played the original Final Fantasy II on its own or as part of previously released compilations, you won't find many reasons to add yet another version to your collection. The Soul of Rebirth add-on found in the Dawn of Souls compilation for the Game Boy Advance is here, as is a complex dungeon called Arcane Sanctuary that cleverly uses key words from the main game. But the game is a relic, and its shortcomings make it less appealing than Final Fantasy I's Anniversary Edition. Considering that previous releases of FFII on the PlayStation and GBA included FF1, it seems especially egregious that a graphical update of such a flawed game would cost full retail price. Granted, it's satisfying in short spurts, and you'll easily squeeze 40 or more hours of gameplay out of it. But it still boils down to a succession of constant random attacks and simple battles that allow you to attack, cast a spell, or use an item in each turn.

The biggest difference between the Anniversary Edition and previous releases is the pretty visual overhaul. Its still consists of 2D backgrounds and sprites, but everything is crisply detailed, as well as beautifully drawn. Certain locales, such as the snowy hamlet of Salamand, are particularly nice, but everything has a vibrant luster that looks lovely on the PSP's widescreen. The updated cutscenes, such as the dreadnought's attack, are also fantastic. Even better, the short load time when pulling up the menu in Final Fantasy I's Anniversary Edition has been eliminated here. The music has also been modernized, so all of the tunes you know and love have been polished up a bit to sound quite pleasant in all their digitized glory.

Final Fantasy II: Anniversary Edition is a faithful remake of what was one of the most flawed games in the series. It's always fun to take a nostalgic look into the past, but the blemishes make this a tougher pill to swallow than its predecessor. If you haven't already experienced this bit of gaming history and can overlook the frustrations, you'll get some enjoyment out of it. But considering it's been packaged with Final Fantasy I in the past, it's hard to justify spending full retail price, no matter how dedicated you are to the series. 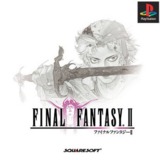