Final Fantasy flavorings keep this dungeon crawler enjoyable for fans in spite of some tiresome and frustrating elements.

Final Fantasy Fables: Chocobo's Dungeon marks the third time Square Enix has paired dungeon-crawling with the world's most adorable yellow bird, capitalizing on the public's seemingly insatiable appetite for anything with a cutesy Final Fantasy theme. The game is an aesthetically pleasing continuation of its PlayStation predecessors, boasting charming visuals and soft melodies. It also introduces a job-changing system as popularized by Final Fantasy Tactics. But don't let its endearing, child-friendly exterior fool you: Chocobo's Dungeon is an intense, often grueling challenge for even experienced dungeon crawlers.

Chocobo's Dungeon opens with treasure hunter Cid and his feathery sidekick, Chocobo, searching for an ancient trinket known as Timeless Power. A familiar foe beats them to it, however, and then uses the bobble to send our heroes to the town of Lostime in an alternate world. The citizens of Lostime harbor a dark secret that has been sealed inside their lost memories, and only Chocobo, with the aid of a boy who fell from the sky, can unlock them by braving the dungeons of their minds.

The bulk of the gameplay occurs in randomly generated, grid-based dungeons that you explore in a turn-based manner. Moving a single panel, or performing any action qualifies as a move, which prompts every monster on the floor to receive a turn. The beauty of Chocobo's Dungeon is that some strategy is required to keep Chocobo in tip-top shape, because it's far better to ambush enemies in hallways or lure foes to you than to go on a rampage and find that you're quickly surrounded and overwhelmed. You'll also have to keep an eye on the constantly draining food gauge because starvation saps Chocobo's health points. If you run out of health points, your bruised, broken chocobo is immediately kicked from the dungeon. A welcome addition that'll help tip the scale in your favor, however, is the ability to upgrade your weapons and armor at the local blacksmith's forge. There, you can even transfer seals that imbue equipment with special effects, which enable you to customize your gear for the trials ahead.

Differentiating Chocobo's Dungeon from the slew of other dungeon crawlers is the inclusion of the job-changing system made famous in Final Fantasy Tactics and recent games in the series. Chocobo can now embrace the ways of the black mage, dragoon, or ninja at will and use numerous spells or abilities that are faithful to the franchise, as well as don adorable class-specific gear. You're free to level your favorite jobs by defeating enemies for the occasional job point, though there are times when playing a particular job has its benefits; curing yourself as a white mage is a definite boon during boss fights and casting elemental spells as a black mage is an effective strategy against a monster with a specific weakness. The addition of popular monsters from the franchise--from tonberries and cactuars to powerful summons like Ifrit and Leviathan--is another treat that successfully blends Final Fantasy with dungeon-crawling gameplay.

Despite the game's cutesy Final Fantasy theme and its simple gameplay mechanics, surviving Chocobo's Dungeon can be an arduous journey involving a lot of luck, which cheapens the experience. In some instances, the game will seem too easy, like when you enter a dungeon right next to a staircase that moves you on to the next floor or when the majority of your enemies can die with a single attack. At other times, the game's heavy reliance on random, invisible traps can ruin a dungeon run from the onset because it's hardly feasible for you to walk around kicking empty air to check it for traps before each move. This makes it much more likely that you'll be pummeled by washtubs, flare spells, and rock falls. You're also more likely to summon monster traps that'll finish you off before you've even begun exploring, and each dungeon loss costs you all of the gil, as well as unequipped items, you have on hand.

The special dungeons, which are optional exercises that reward you with new jobs and other abilities, can feature very restrictive, annoying rules. In one, you and all monsters are limited to one health point, so just a single hit or unlucky trap can send you reeling back to the start. To worsen matters, you're not allowed to bring any items or gear into special dungeons. And to add to the frustration, it becomes increasingly difficult to level each job because you're unable to earn experience or job points from special dungeons, which is a pity because you'll be attempting those a lot. This means that you're forced to reexplore shrines, where the guardian beasts rest, to level up your weaker jobs if you're getting bested by a primary dungeon, which is a dull and tedious process.

What's even more boring is the game's lack of variety, with most dungeons relying on the same generic design shrouded in a different color. Shrine dungeons, however, are highly varied and well-detailed. These have vivid colors and unique aesthetic elements that add to their atmosphere, like the intricate coral reef that serves as Leviathan's shrine. You'll encounter some visually impressive sequences at key moments and when summoning guardians and, on the whole, exploring the quaint little town of Lostime is a pleasant treat complemented by a strong Final Fantasy flair and familiar, soothing music. The cutscenes are less pleasing since they're plagued by poor dialogue and are highly melodramatic, with ridiculously exaggerated voice acting and no Japanese voice-over option to replace it.

Completing all of the primary dungeons should take about 40 hours, though you can easily spend almost twice as long playing through special dungeons, planting flowers, catching fish, leveling jobs, or visiting the local arcade for minigames. The cute pop-up card game from Chocobo Tales makes a triumphant return and allows you to summon monsters to fight for you in a manner reminiscent of Pokemon. Creating the perfect deck can be a fun task, and even more enjoyable is the option to play online via the Nintendo Wi-Fi Connection. 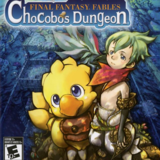