The vibrant world and exciting story of this action game are at odds with its repetitive and frustrating gameplay.

When it comes to creating distinct and memorable worlds, few developers have such a storied history as Square Enix. And in The Crystal Bearers, the new third-person adventure game set in the Crystal Chronicles universe, this gift for conjuring worlds is on glorious display. Your journeys will take you through a diverse assortment of vibrant locales that are alive with detail and activity, and you'll sometimes feel yourself getting transported to this vividly realized world. But that feeling won't last. The Crystal Bearers is crammed with disappointments and frustrations that are every bit the match of its charms, and each time you're starting to feel yourself absorbed in the adventure, one of those disappointments comes along and yanks you right out of it.

The Crystal Bearers may be set in the same universe as earlier Crystal Chronicles games, but no knowledge of those is necessary to dive into this one. It has been a thousand years since the events of the original game, and the world has changed drastically. Technology is the dominant force, with magic the domain of only a handful of outcasts called crystal bearers. You play as Layle, a brash young bearer who rents out his abilities of telekinesis to the highest bidder. The game gets off to a thrilling start when the flying luxury ship that Layle has been hired to protect is besieged by monsters summoned by a member of the ostensibly extinct Yuke tribe. Layle launches himself into a hot pursuit of the enigmatic Yuke and into an adventure in which the fate of the world is at stake. The story is a good one, packed with memorable characters, rich with themes of discrimination and a sense of history, and told via frequently exciting cutscenes. The most compelling reason to play this game is to experience the tale it tells and the richly detailed, magical world in which it takes place.

Experiencing that tale means putting up with a whole lot of disappointing gameplay, though. The Crystal Bearers makes a strong first impression, with a bold opening that makes it clear right off the bat that this is an action game, altogether different from the earlier, more role-playing-oriented Crystal Chronicles titles. When the ship is attacked, Layle literally leaps into action, and as he plummets through the sky, you use the Wii remote to target and fire at the flying monsters. It's a brisk and fun opening sequence that sets a tone the game sadly fails to maintain. Other minigame sequences pop up frequently throughout the story, including an on-rails chocobo chase sequence and a simple rhythm game when Layle must dance at a high-class ball, but while these are pleasant little diversions from the core action, they aren't enough to save it.

Although the plot tries to create a sense of tension as Layle pursues the mysterious Yuke from one location to another in the early stages, the dull gameplay kills any sense of pacing. When you run from area to area, you'll occasionally come across groups of monsters to fight. But the combat is shallow and tedious. You can target an environmental object or an enemy with the remote, grab it using Layle's powers, and toss it through the air with a quick flick or a tap of the B button. You can also swing the remote to have Layle roll, avoiding any incoming attacks. This is how all combat works in the game. You target things, grab them, and toss them, over and over again. There's a small amount of experimentation involved, since it may prove to be more effective to toss certain objects at certain enemies, but the mechanics of combat never become any more elaborate or rewarding. Even the final boss battle, which to its credit has a grand sense of scale and drama to it, is as frustrating and dull as the battles that precede it.

The dullness of combat is compounded by the camera, which, rather than smartly following the pointer when you're trying to target a monster at the edge of the screen, must be slowly rotated with the control pad. And it's made more frustrating by an imposed time limit. If you vanquish all the monsters in an area, you're rewarded with a myrrh fragment, which increases your maximum life. However, if you take too long to defeat the monsters, they all vanish, and you must wait for all of them to reappear for another shot at the precious myrrh fragment. What's particularly maddening about the time limit is that there's no countdown displayed onscreen, so you never know how much time you have remaining. If you could see the clock ticking down, you'd at least be able to cut your losses and move on when it became clear that things weren't going to go your way, but as it is, you can waste minutes trying to defeat all the monsters, only to hear a bell toll as you fail and the monsters vanish, leaving you with nothing to show for your efforts.

Of course, you're not always fighting. Much of your time is spent just traversing the world, running or riding a chocobo from one key location to the next, and this process is also marred by a glaring issue. The game has no proper map to help you get from one place to another. As a result, it's very easy to get lost and to waste long periods of time running around until you stumble on the path to where you're going.

One thing you probably won't spend much time doing is customizing Layle. Character customization may be a significant part of most games that bear the Final Fantasy name, but it's a very minor component here. As you travel and fight monsters, you'll gather materials that can be crafted into various accessories that Layle can equip to enhance certain attributes, increase the size of your target cursor, or convey other bonuses. But the overall impact of these accessories on the gameplay is generally small, and you can progress through the entire game without bothering with accessories at all.

The Crystal Bearers looks impressive. The locations you visit are designed with an imaginative flair and are imbued with a level of detail that makes them truly captivating. There's a remarkable variety to the locations as well. The architecture, fashion, and technology of each area lend believability to the rich history and diverse cultures that the game's story hints at. From the futuristic elegance of the Lilty capital to the rusty oppressiveness of an aerial prison, the world of this game will stay with you. So will its characters, thanks to smart writing and mostly solid voice acting, though Layle's lines are listlessly delivered. The various melodies that play as you travel the world provide appropriate accompaniment to the look of each region, and the sound effects suit the action just fine.

The amount of time it takes to reach the conclusion of The Crystal Bearers can vary wildly depending on how much combat you decide to bother with and how much time you spend trying to figure out how to get where you're going, but regardless of whether it takes you eight hours or 15, you won't enjoy most of that time. A game this beautiful, with an exciting, well-told story like this one, should have gameplay that makes you want to spend time in its world. But as dazzling as the characters and locations are, they can't hide the fact that the game just isn't fun to play. 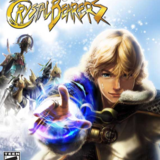 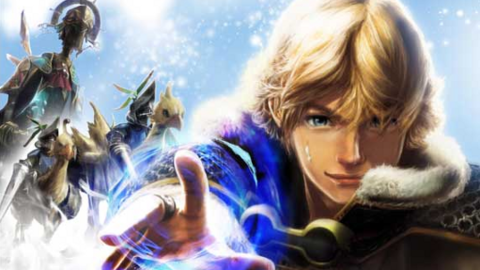