Heavy is the head that wears the crown.

The best Final Fantasy games are often regarded for their layered characters and stories, but that will not be Final Fantasy XV's legacy. Save for a few minor arcs and some impressive cutscenes, the story of the deposed Prince Noctis and his three bodyguards ultimately leaves little room for its stars to evolve and earn your affection. But finishing Final Fantasy XV's story prepares you for difficult trials tucked away in Eos, the game's imposing and bountiful open world. Its best quests and treasures extend well beyond the needs of Noctis' fight, and it's these pursuits that make you appreciate your brothers in arms, and Final Fantasy XV in the long run.

We first meet Noctis and his crew en route to the prince's wedding; a political marriage to his childhood friend designed to unite their families' opposing nations. Shortly afterwards, Noctis receives news that his fiance's father ordered an invasion of Noctis's home city, killing his father--King Regis--and claiming stewardship of a powerful crystal. In an effort to retake the throne and restore balance to the world, Noctis must locate ancestral weapons scattered in lost tombs across Eos, battle hundreds of monsters, and go toe-to-toe with powerful gods.

Eos' best quests and treasures extend well beyond the needs of Noctis' fight, and it's these pursuits that make you appreciate your brothers-in-arms, and Final Fantasy XV in the long run.

But this is a fantasy anchored by more mundane, real-world elements; Noctis and company sleep in motels, eat at roadside diners, and gossip with down-to-earth cooks between missions. Among the relatable working-class people that populate most of Eos, your party sticks out like a sore thumb. They ride in an ostentatious convertible, their hyper-fashionable clothes and hair flapping in the wind. Other stylish elites make an appearance during cutscenes, of course, but your meetings with commoners far outnumber your royal rendezvous--there are at least 80 side quests, and only 14 story chapters. For the vast majority of the game, there's a very real disconnect between your party and the outside world that's never thoroughly addressed.

Unlike many of its predecessors, Final Fantasy XV embraces contemporary open-world game principles from the start: outside of story missions, you are free to explore sprawling environments and take on dozens of side quests at your leisure. Townsfolk, seemingly unaware of your princely status, will employ you in a number of tasks including infrastructure maintenance, scientific field work, gem hunting, and light farming. Dedicating your time to rewarding pursuits has a side effect: the more comfortable you become living in Eos doing honest work, the further away and less important Noctis' concerns feel. It doesn't help that most NPCs would rather talk about their magazine publishing business or recipes than important world affairs.

And as far as your bodyguards are concerned: they're content cruising around Eos in their fancy car, cracking jokes and taking selfies. With Noctis' crew--Gladiolus the muscle, Ignis the brains, and Prompto the comic relief--what you see is what you get. Each character is treated to time in the spotlight during specific story missions, but these events, which seem major in the moment, have little long-term impact. Your friends make for upbeat travel companions, offering tons of colorful banter during your travels, but it's disappointing to see supporting characters--a group that typically has diverse backgrounds and curious personalities in Final Fantasy games--relegated to cliched, unbending roles.

It's disappointing to see supporting characters--a group that typically has diverse backgrounds and curious personalities in Final Fantasy games--relegated to cliched, unbending roles.

During the first half of the story, missions are designed to familiarize you with the ebb and flow of the open world; how to make money, where to spend it, and how to recover after a hard day's work. More importantly, you learn how to fight. There's a lot to manage in combat--despite only having direct control over Noctis as opposed to your entire party--which makes for a satisfying juggling act once you understand the game's demanding pace and the extent of your abilities. Though you can pause the action to re-equip characters and use items mid-battle, combat is otherwise a non-stop, fluid process and very different from previous Final Fantasy systems. Unlike Final Fantasy XII which allows you to dictate the behavior of your companions, you have to rely on AI to ensure your allies have your back in Final Fantasy XV. The only time you can issue direct commands is when they deal enough damage and fill up a meter, and you call upon the one ability you assigned to them.

By holding down a button, Noctis will deliver a combo attack until he's interrupted by an enemy. If you're quick, you can press another button to phase through an incoming attack and continue your assault. Noctis can also warp-attack from great distances, swap between four weapons--mid-combo if need be--, cast magic, and on rare occasions, summon god-like Astrals onto the battlefield to mop up enemies.

Astrals are powerful beings that align with Noctis throughout the story, to be summoned later in a time of need. They offer some of the most impressive moments in the game--typical of Final Fantasy "summons"--towering high above battles while unleashing incredible displays of power. But much like distant friends, you only see Astrals when it works for their schedule. Each of the four Astrals you acquire call for very specific battle conditions, but even if all criteria are met--being dangerously low on health in the vicinity of water, in one case--there's no guarantee an Astral will actually appear. Where you could always count on summons to save the day in previous Final Fantasy games, it's disheartening that they usually fail to appear during Final Fantasy XV's most difficult battles.

There's a lot to manage in combat, which makes for a satisfying juggling act once you understand the game's demanding pace and the extent of your abilities.

More often than not, you can at least rely on magic to hammer tough enemies when Astrals are out of reach. Spells can be crafted by bottling ice, fire, and lightning harvested from elemental springs in dungeons and the overworld, and you can also combine these elements with items for increased potency and extra status effects, the tradeoff being that you're sacrificing valuable commodities in the process--spells are consumables, not permanent abilities. It's important to pay attention to what you cast, but also where you cast it, as your party can suffer frostbite, burns, and shock if they are standing too close to the point of impact. While this sounds bad, it adds an appreciable layer of strategy to combat that makes you weigh the risks and benefits of taking the easy way out.

As you earn experience and level up, your party accrues ability points that can be spent within the Ascension Grid menu to upgrade things like AI behaviors in battle, or bolster Noctis' suite of skills. You can also unlock passive abilities that help you earn money and experience points faster as you explore the open world. But all told, AP is in short supply and the Ascension Grid is fractured into many categories, making it difficult to decide where to focus your efforts.

Ultimately, accessories do the heavy lifting when it comes to character customization. They typically increase characters' stats, but may also offer protection from status ailments and influence your companions' behaviors. On the other hand, most weapons you acquire are less exciting and varied, and you may be shocked and disappointed when you discover that each merchant only carries one or two for the entirety of the game.

And don't be fooled by the "attire" menu; no one sells clothing in the game, meaning you're stuck with your initial set--two per character, or four, if you count optional jackets--until you unlock a third outfit at the end. It seems odd that there are so few clothing options, not only because there's an inventory screen dedicated to them, but because the few outfits you can wear come with small but noticeable effects on your party's attributes. They clearly serve a greater purpose, but are largely treated like an afterthought.

You can more than double the amount of time it takes to finish the story and still have plenty of worthwhile adventures calling for your attention.

By the time you tackle the second half of Final Fantasy XV's story missions, you'll be surprised how fast the remaining chapters go by. These are linear quests, some shorter than an hour. You can always explore the world at your leisure, but these tightly choreographed dungeon runs and action set-pieces move fast and draw you in with spectacular cutscenes.

Presuming you let it pull you along, with minimal side tracking, it's possible to finish Final Fantasy XV's story in about 30 hours. This is short by Final Fantasy standards, but after the credits roll, the real fun is just getting started. Final Fantasy XV's endgame content is some of the best in the entire game. Unreasonably large monsters, legendary weapons, and mysterious high-level dungeons lie in wait if you choose to continue playing. You can more than double the amount of time it takes to finish the story and still have plenty of worthwhile adventures calling for your attention.

Over 60 hours into my quest, I recently discovered strange locked doors unlike anything else I've seen up until this point, nested within the inner sanctums of high-level dungeons. I have no idea how to open them, but my party's amazement--as well as my own--is enough to make me want to pore over Eos and find a way. I'm also in the middle of a questline that promises to reward me with the most powerful weapons in the game, but only if I can take down powerful creatures that almost the Astrals' impressive scale. When Final Fantasy XV eventually runs its course, these are the moments I will remember most.

One of the first things you see when you boot up the game is this claim "A Final Fantasy for fans and first-timers." It's a strange statement; fans can't agree on what makes a good Final Fantasy game, and who knows why newcomers shied away from the series in the past. It's been a long ten years since Final Fantasy XV was first revealed, and tastes have changed in the meantime. While it's safe to assume fans and outsiders will find some aspect of Final Fantasy XV disappointing--be it the shallow story or finnicky Astrals--it would be hard for anyone to deny that Final Fantasy XV is a fascinating game after giving it a chance. Where its characters fail to impress, Final Fantasy XV's beautiful world and exciting challenges save the day.

View Comments (994)
Back To Top
8
Great
About GameSpot Reviews

Peter completed Final Fantasy XV's story in 35 hours on PlayStation 4. 30 hours later, he continues to travel around the continent of Eos in search of legendary weapons and beasts worthy of his sword. GameSpot was provided with a complimentary copy of the game for the purpose of this review. 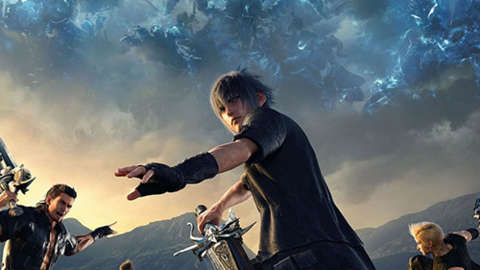