Fighting Force 2 takes the same basic beat-'em-up ethic and melds it with a pinch of Lara Croftian camera work and a smidgen of Metal Gear-esque espionage.

If you're lucky, you don't remember the original Fighting Force. The game tried to resurrect the Final Fight-style game by providing scads of bad guys you could beat by simply pounding on the punch button until everyone was dead. To put it bluntly, the first Fighting Force was not a good game. Fighting Force 2 takes the same basic beat-'em-up ethic and melds it with a pinch of Lara Croftian camera work and a smidgen of Metal Gear-esque espionage. The resulting game is better than the original, but it still comes off as an incredibly dull piece of software.

The game sends you on several different missions, but your objective never really matters. You just plod through level after level, beating up anyone in your path and breaking all sorts of enemy equipment along the way. Just about anything you see can be destroyed if you hit it enough times. That's right, your character has the ability to make soda machines explode using only his bare fists. Heck, even an office chair will explode if you kick it hard enough. This is incredibly silly, especially when guns and health pickups start flying out of the copy machine you just stabbed with your knife. This is also just about the only cool element in the entire game. The enemies are painfully easy to defeat, especially given the copious amount of weapons you'll find along the way. Anything you can make explode could potentially contain another weapon for your inventory. Weapons include pistols (which our hero holds sideways like the true gangsta he is), a shotgun, knives, grenades, sledgehammers, pipes, and axes. The inventory is controlled by holding down a button and scrolling through your items until you find one you like - it's not a perfect scheme, but it works well enough.

OK, the gameplay is weak and generic. The sound is occasionally sketchy. The controls are a little too touchy. But at least the game is fairly pleasing to the eye. Though there are occasionally some clipping problems and some bad seams here and there, the game generally looks pretty good. The textures are nice and crisp, and the animation is fluid. The behind-the-back camera works well, though it has lots of problems in small rooms.

There's really nothing exciting about Fighting Force 2. The ease of gameplay makes it feel less like a game and more like an exercise. So you'll just wander around kicking everything in sight until sheer boredom forces you to turn the game off - which, depending on your tolerance level, will be anywhere from ten minutes to three hours. Yes, this game is better than the original Fighting Force - but that's really not saying much. Fighting Force 2 would make a decent rental, if only to laugh at the exploding office chairs, but not much else. 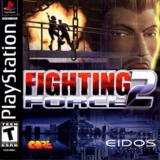 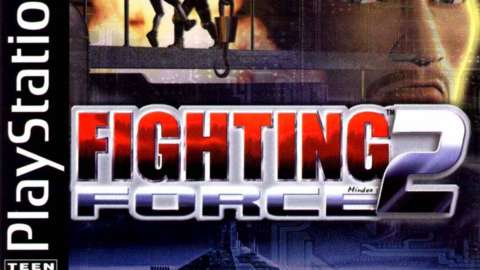 Fighting Force 2 takes the same basic beat-'em-up ethic and melds it with a pinch of Lara Croftian camera work and a smidgen of Metal Gear-esque espionage.