Though definitely an improvement over its predecessor, this boxing game isn't without a few problems.

To the untrained eye, boxing involves little more than two fighters punching each other until one of them falls down. There's a lot more to the sport than that, though, and Fight Night Round 4 is a game that, while not necessarily realistic, encourages you to think about every punch you throw in much the same way a real boxer does. The action is fast-paced, the career mode really sucks you in, and there are some neat online options to boot. On the flip side, the career mode places too much importance on frustrating training minigames, and all too often opponents in ranked online matches suck the fun out of the fight by mindlessly spamming punches. Regardless, Fight Night Round 4 is a great boxing game, and one that improves upon its predecessor despite a few noticeable shortcomings.

From the moment you start playing, it's clear that Fight Night Round 4 is a unique animal. Some of the controls will feel familiar if you played Round 3, but as you play through the brief-but-adequate tutorial it becomes apparent that this year's action has a much more organic feel. Almost nothing about the fighters' movements feels scripted, so you need to look for openings before throwing punches, and every time you flick or rotate the right analog stick to throw a punch, any number of things can happen. Your punch might catch your opponent off guard and stun him temporarily, it might glance off the side of his head doing very little damage, your arm might become entangled with your opponent's as he tries to throw a punch at the same time, you might miss completely and leave yourself open, and so on. Furthermore, if your opponent manages to perfectly time a block or dodge move, the action will slow down for a moment as he's given the opportunity to land a powerful counterattack. It's a great gameplay mechanic that doesn't interfere with the flow of the fight and that encourages you to place as much importance on defense as on offense.

Boxers in Round 4 are capable of throwing a lot more punches in each round than their real-life counterparts, but that caveat aside, fights play out in an impressively believable fashion. In a fight that lasts 10 three-minute rounds, for example, it's not uncommon for the momentum to shift from one fighter to the other as fatigue, heavy punches, and different strategies all play their part. Also deserving of a mention is the ingenious new corner system introduced this year. In between rounds, you get to spend points on replenishing your stamina and health and on repairing damage, and the number of points that you get to spend is determined by different aspects of your performance in the previous round. For example, you earn points for having a high percentage of your punches find their target, for avoiding your opponent's punches, for stunning or knocking down your opponent, and even for managing to get back to your feet via a first-person minigame after hitting the canvas. It's a great system, because it acknowledges that a boxer throwing five times as many punches as his opponent isn't necessarily throwing better punches, and so while he may well earn more points from the judges, he's also going to expend a lot more stamina, and if many of his punches are being blocked or dodged, he's handing his opponent more to points to spend in his corner at the end of the round.

There are more than 40 instantly recognizable professional pugilists on the Round 4 roster, and that number is growing thanks to users who are taking the time to create them as custom fighters and share them online. Zab Judah, Evander Holyfield, Danny Williams, and Floyd Mayweather are just a handful of the fighters who have been brilliantly re-created using photos uploaded to the EA Sports World Web site, along with all manner of celebrities. The powerful toolset for creating custom fighters is easy to use, but satisfying results are much easier to achieve by uploading digital photos to the aforementioned site than by using the console's own camera. Whichever method you choose, the head generated using a frontal and a profile photo requires some major tweaking afterward, but the rewards are well worth the effort--especially if you're keen to play through the Legacy career mode as yourself.

In Legacy mode, your chosen fighter starts out as a "bum" at the bottom of his 50-strong weight class. Your goal, of course, is to work your way up to number one and claim the title belt, but Round 4 takes several steps beyond that as well. After winning your chosen division and earning the rank of champion, you're really only about halfway to achieving your full potential, because in addition to defending your title, there are other belts in other weight classes up for grabs. The criteria for retiring as a Hall of Famer, a ring legend, or the greatest of all time are numerous, and not for the fainthearted. Examples include maintaining a win percentage of over 95 percent across dozens of fights, defending a title successfully as many as eight times, and holding three championship belts simultaneously. The road to achieving that kind of success is long, which is a good thing, save for those occasions when obstacles on the road seem unnecessary or are just the result of bad design.

Legacy mode fighters are 19 years old when their careers get under way, and because they age and must ultimately retire, you have only a finite amount of time in which to achieve your goals. Your fighter's attributes are mediocre when you compete in your first amateur tournament, and improving them is a long and often challenging process. After every fight, your first job in Legacy mode is to schedule your next one, which in itself is an unnecessarily clumsy procedure that involves picking the date that you want to fight on, choosing which of the available opponents you want to fight, and then choosing the date that you want to fight him on again. The only way to improve your fighter between bouts is to train, and the number of training sessions you get is determined by how far apart the fights are. To fit in the maximum three sessions, you need to schedule your fights a full six months apart, which would be fine if your fighter weren't growing old in the meantime. Compounding that problem is that even acing a training minigame session results in only a very small gain for your fighter, and while the six minigames are fun, some are so difficult that the gains you get are even smaller. There's an option to simulate the training and receive 50 percent of the potential gain, but earning two or three skill points just doesn't amount to much when your fighter's profile is composed of 12 attributes rated from 1 to 100.

The result of the training problems is that at some stage you're likely to move up the rankings to a point at which all of your potential opponents (or at least those who can further your career) are vastly superior to you on paper. It's still possible to win, and it's not terribly difficult to do so, but you're unlikely to knock these guys out, so every fight becomes a 30-minute exercise in making sure that you land more point-scoring punches than your opponent--even if they're too weak to hurt him. It's unfortunate that the training in Legacy mode isn't more effective, because while it's still compelling to create a fighter and guide him up through the ranks, maintaining a good win/loss record almost necessitates fights against guys you know you can beat while you wait for your attributes to catch up to your ranking. Pointless, poorly written, and repetitive e-mails sent to your fighter also detract from the Legacy mode somewhat, though they're so pointless that ignoring them has no impact whatsoever.

When fighting against AI opponents in Round 4, regardless of whether you're in Legacy mode or just pitting favorite pros against each other in a single fight, it's hard not to feel like you have an unfair advantage. AI fighters will, for the most part, throw something resembling a realistic number of punches in a round, but you can easily throw three or four times as many without risking tiring yourself out too much. Online fights, on the other hand, pit you against opponents who can fight just as unrealistically as you, and because the fights very rarely suffer from noticeable lag, it's here that Fight Night Round 4 really shines--at least when you play with friends.

In addition to one-off fights, which can include licensed fighters as well as custom creations, Round 4 features an Online World Championship mode that ranks you against every other player in the world on weight-specific leaderboards. The downside to ranked online fights is that too many players are simply creating fighters with long reaches and then throwing as many punches as they possibly can in every round. It doesn't guarantee them a win because, if you're patient, it's certainly possible to avoid their blows and counter-attack while they tire themselves out. It's no fun to come up against opponents like these though, and quitting out of a fight prematurely is only an option if you don't mind having a loss and a DNF (did not finish) percentage on your profile.

When you're in the ring, hopefully with an opponent who's not going to exit prematurely, Fight Night Round 4 is a real treat for the senses. The fighters, the audiences, and the arenas that they're packed into all look great, and the slow-motion replays of knockout punches are brutal, but the real star of the show is the audio. Punches sound satisfying, crowds get excited and shout fighter-specific chants, your corner men can be heard yelling useful instructions, and the color commentary is great. The guys on the mics not only call the fight accurately, but also offer anecdotes and analogies aplenty (enough that they don't repeat themselves too often) and drop a good amount of fighter-specific knowledge--mentioning things like Ricky Hatton's affiliation with Manchester City Football Club as well as a couple of his recent real-life fights. In Legacy mode, they also reference your custom fighter's career record, though they don't go into any detail about previous fights or anything like that.

Fight Night Round 4's greatest strength is that while it's accessible and relatively easy for newcomers, it can also be challenging and rewarding for pugilism perfectionists. It's unfortunate that online matches are being dominated by players who are mindlessly spamming punches rather than fighting realistically, because on those occasions that you do meet someone who's playing with some finesse it really is a lot of fun. Stepping into Fight Night Round 4's ring is definitely recommended if you have any interest in the sport whatsoever, just be aware that not everyone you come up against will be fighting in the spirit of the Queensbury rules.

Editor's Note: Our original review incorrectly stated that players aren't penalized for disconnecting from online fights prematurely. In fact, players who disconnect automatically lose the fight, even if this isn't always immediately apparent on the leaderboards. GameSpot regrets the error. 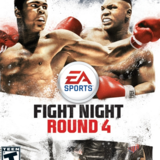