FIFA 11 is more playable, refined, and feature-packed than any FIFA game before it.

After a steady rise in quality over the last few years, FIFA 10 added yet more welcome new features and game modes while refining the core gameplay. It's a tough act to follow for FIFA 11, but thanks to more realistic gameplay, new game modes, and more features, this is the best and most comprehensive FIFA game yet. The main improvements are refinements to the gameplay, rather than revolutionary new game modes as we've seen in previous years, but they're significant enough to make EA Sports' latest offering well worth the upgrade.

The changes to this year's game aren't all immediately apparent, but they are welcome and make the game deeper and more realistic. The biggest change is the physicality between players--whether it's a winger holding off a defender, or two players tussling in the box, FIFA 11's players are constantly fighting each other for the ball. This increased tactility has an impact on the gameplay, adding an emphasis on player strength and speed, making player interaction more brutal, and producing some nice touches that add to the realism. For example, if you perform a crunching tackle, the tackler will sportingly tap the downed player on the back as he runs by to collect the ball. There's also much more variation to the passes and shots; you won't see the same shots being taken repeatedly, while positioning, footedness, and environmental factors such as rain all have a real and notable impact. Scoring is also more difficult than before; improved goalies are harder to beat than in FIFA 10, and shots, particularly those lobbed over the keeper, are harder to get in the net.

Much more emphasis has also been put on individual players and how they operate within the team, thanks to the new Personality Plus feature. This is a system of attributes that affect players' skills, from how accurately they pass the ball to how quickly they can control it from the air. Topflight teams boast players with skills across the board, and to get the most from players you need to know how to play to their individual strengths. For example, a player like Wayne Rooney has an inherent ability to score from short range, whereas Steven Gerrard is a much better long-distance shooter. The system works well, and you can feel the difference between players as you control them on the pitch. This personality system also extends to celebrations--you can now hold down the A button to do trademark post-goal dances from famous players, and if you're online, you can also interact with the goal scorer with new team-based celebrations.

The only new game mode in FIFA 11 is Career, which combines the Be a Pro and Manager modes from previous games and gives them a slicker visual presentation. You start out your 15-year career as a player, a manager, or a combination of the two, with responsibility for different activities depending on your role. As a player, you can choose to take control of an individual team member, such as your Virtual Pro player, or play as the entire team. Since you can choose from both options on a match-by-match basis, you can mix things up during your career to keep it interesting. As a manager, you have considerations such as bringing new talent to the club and making sure all your players get experience on the pitch. There are slight tweaks to the management side this year, such as a two-stage negotiation process that also involves wage discussions with the player. It's an improvement and adds depth to proceedings, while coach feedback allows you to keep better tabs on your squad than before. The career mode has definitely improved the existing modes by rolling them into one structure--the presentation is great, you have more flexibility to play games in different roles, and you can compare your career accomplishments with friends' accomplishments on online leaderboards.

The headline feature this year is the new option to play as a goalkeeper in offline and online game modes. The prospect of being the keeper may not sound that exciting, but the controls are intuitive and it can be fun to play as him in short doses. The camera shifts to a behind-the-player perspective, and you control movement with the left stick and diving with the right, with the aim of maintaining a good position while diving at the right moment. The process is made easier by visible lines that predict the path of the ball, as well as a marker that shows the optimal position to be in, and you can even snap to this spot by holding the left bumper. While it's inevitable that much of your time is spent waiting around, you can shout instructions to your team in offline modes by pressing buttons to indicate when they should cross, pass, and shoot, allowing you some tactical control over the game. Ultimately, it's a welcome addition to finally control the keeper, but it's unlikely that you'll want to play through an entire career as one unless you're eager to unlock achievements for doing so. The main benefit comes online, where it's fun to play as the keeper on an occasional basis.

Online, FIFA 11 is as robust and fun as ever, and it boasts 11 versus 11 online play for the first time. This is the first FIFA game to include EA's online pass system, so you need to input a code included in the box in order to play online. The Live Season feature continues, updating real-world player data throughout the football season for 400 MS points per league, or 800 MS points for all five. The hospitality settings option, which was introduced in 2010 FIFA World Cup and saves your FIFA settings to EA's servers, also makes an appearance, allowing you to import your preferences from the earlier game. The online game modes are all familiar--head-to-head ranked and unranked matches are still a lot of fun online and mostly lag-free, while the 10-versus-10 team play mode has been expanded to 11-versus-11 for the first time. You can also play the game with up to four players locally on one machine.

It only takes a couple of button presses to jump into any of the online match types, but there are also lobbies for those who wish to tweak their match options or chat with other players before a game. You can also set up friend leagues for others to join, with multiple matches played between each player in the league in order to decide the victor. You can also play ranked matches with your Virtual Pro player, and set up your own club with your Virtual Pro and recruit other players to join your team. In all, there are an abundance of online game types for you to get involved in. That said, there are still areas where the game could be improved; being able to download your Game Face for your Virtual Pro is neat, but it still needs to be done through a fiddly process involving a computer and a camera or webcam, rather than an Xbox Live Vision camera.

FIFA 11 preserves the series' tradition of slick presentation, with excellent commentary, easy-to-navigate menus, and a great soundtrack. The commentary is insightful and is naturally delivered, with anecdotes about the history behind the major clubs and recognition of derby matches, although the commentators will frequently start to make a point only to cut themselves off when something else happens. This year's soundtrack is also particularly noteworthy, with 33 tracks from the likes of Gorillaz, LCD Soundsystem, and Mark Ronson, and the ability to play weekly podcasts in the game is a nice feature. The commentary, presentation, and music have always been good, though; the only standout addition is a leaderboard on the main menu that compares your accomplishments to those of your friends.

Off the pitch, there are a couple of new additions that add to an already robust set of features. The creation centre allows you to create players and teams through a Web browser and then share them with other people to download in the game. The customisation options are impressive, letting you tailor the look, stats, and even mental approach (such as "argues with referees") of your player. A replay theatre has also been added--highlights are automatically compiled at the end of each match, and you can save them in video form locally or online. If you save them locally, the video format avoids the need to load the game up to watch them back in-engine, although the videos are saved in a low-resolution format. The music and chants feature is also a good addition, allowing you to import songs and audio clips into the game, with an impressive level of customisation. For instance, you can choose a specific song to play when your favourite team scores a goal, and your chosen recording will sound as if it's coming through the stadium speakers.

Thanks to key improvements to the core gameplay this year, FIFA 11 is the best and most addictive version of the game yet. The improved player characteristics and animations result in a deep and rewarding experience that feels as exciting and unpredictable as the real thing. It also boasts key online and offline improvements, with full 11 versus 11 online play for the first time in the genre, and a new career mode that brings together the single-player game in a much more enjoyable way than before. There may not be any new revolutionary new game modes this year, but with matches, leagues, tournaments, multiple career options, and 11 versus 11 online, it's as feature-packed a football game as you could want. 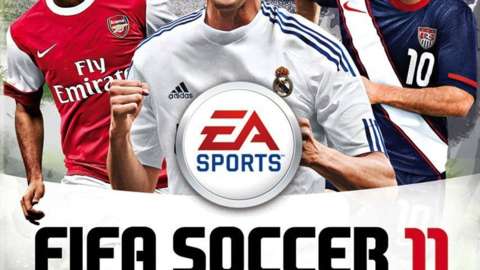 EA returns to the field with another installment in its long-running soccer series.