Simple games of chance that will please folks excited for Fable II.

Fable II Pub Games is a collection of three games of chance popular throughout Albion, the world of Fable. The games themselves will feel familiar to anyone with a passing knowledge of common gambling games, and on balance, they're mildly entertaining. Their real appeal lies in their eventual integration with your Fable II game. Any gold or items that you win (or debt you accrue) can be passed on to your hero in Fable II, for better or worse. If you're not excited about Fable II, these games aren't anything special. But for those counting the days until October, the thoroughly Albion-esque presentation and the two reasonably engaging games make Pub Games an appealing purchase.

If you think that you'll download this game and easily earn thousands of gold pieces to use as seed money for your plan to purchase every building in Bowerstone, think again. Unless you have a good knowledge of gambling strategy, you'll likely find yourself plunging into debt fairly rapidly. There is a silver lining to this, given that each coin you wager will earn you points toward your gambler's rating. As your rating grows, you'll be able to play on higher-stakes tables that have slightly better odds. In theory, this will let you earn your money back more easily, though it will take a calculated approach to keep from sliding further into pauperdom.

A higher gambler's rating will also earn you access to tournaments for each of the three games. There are 15 tournaments in all, and placing in the top five in the field of AI competitors in any given tournament will earn you gold and an item for use in Fable II. Some of these rewards seem fairly common, such as foodstuffs, tattoos, and a backflip trick for your dog, whereas others seem more precious, like potions that will permanently increase a given attribute. There are also items that you won't be able to buy in Albion, though you'll have to win the toughest tournaments to earn those -- and that's no mean feat.

The most entertaining of the games is Fortune's Tower, a card game akin to blackjack. After you place your bet, the dealer lays down cards in a pyramid, one row at a time. The sum of each row of numbered cards is the dealer's offer for that row, and you choose to either take that offer or risk another row. As the rows get longer, your chances of winning big increase, as do your chances of busting and losing your bet. You'll have to do well over time if you hope to profit, and this requires that you choose wisely when to push your luck and when to play conservatively. The more you play, the more nuanced your strategy becomes, and this can become quite engaging. It's easy to tell yourself, "Just one more hand...," and still be playing 20 minutes later.

There's also a dice game called Keystone that plays like a blend of roulette and craps. The betting table is shaped like a semicircle, and is ringed along the circular edge by 16 arch stones, numbered 3-18. Each roll removes an arch stone, and the game ends when two of the four keystones (specific arch stones) are removed from the table. At the outset of the game, you bet on which arch stones will be removed before the game ends, and then you can bet on a variety of outcomes (pairs, a range of numbers, diamonds or ovals, and so on) for each subsequent roll. There's some strategy to how much you bet and how far you spread it around, which is aided by specific odds that you can access with the pull of a trigger. Profiting here will require luck, as usual, and a measured approach to your betting strategy.

The lone dud in Pub Games is Spinnerbox, which is Albion's version of a slot machine. Although its spinning disks are aesthetically pleasing, they're all that's appealing about this game. It won't take long on this one before you begin to have chilling visions of yourself as a hunchbacked, visor-wearing casino rat feeding quarters into a one-armed bandit for 17 hours a day.

Consequences are light in Fable II Pub Games because ultimately you decide whether to merge your winnings with your Fable II hero. Even if you end up thousands of dollars in debt with a few neat items, it could still be worth merging just to see if brutish debt collectors come after your kneecaps or try to repossess your house. If that scenario sounds entertaining to you, then Pub Games is a solid purchase. However, if you're lukewarm about Fable II or gambling in general, then Pub Games doesn't do anything well enough to warrant your attention. 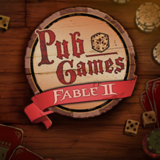