F1 2010 is a good first attempt at bringing the wonder of Formula One to current-generation consoles.

F1 2010 is a fun and faithful re-creation of the most challenging series in motorsports, and while it has some minor issues, it's a good start for Codemasters' new franchise. The racing is appropriately challenging, the sense of speed is impressive, and both the cars and the circuits that they race around are re-created realistically. If you're a fan of Formula One you're sure to get a lot of enjoyment out of the game, and with challenges that include time trials, individual races, and a time-consuming seven-year career mode, you're unlikely to tire of it anytime soon.

All of the cars, teams and tracks of the current Formula One season are represented in F1 2010, and it's hard to find fault with the re-creation of any of them. The way that cloud cover, grandstands, and over-hanging track markers are accurately reflected on the car chassis when playing in the cockpit view serves to heighten the sense of immersion, even if you're too focused on the track to fully appreciate them. The tracks are just as impressively rendered, though ironically it's when things become slightly obscured by rain that the game's graphics start to shine. The visibility changes as cars spray standing water into the air, the racing line starts to dry realistically as a result, and the spatters of rain on the camera mimic what you might see from inside a racing helmet. Details like these really show off F1 2010's visuals at their best, and they have a noticeable impact on gameplay as well. What audio there is also works well; you only have the impressive roar of your engine and a little dialog on the radio to keep you company during races, but given the amount of concentration required to make it around the tracks, this is no bad thing.

F1 2010 is a racer set very firmly in the simulation camp. Fully customisable difficulty settings let you turn on a range of assists and aids, but the lack of tutorials makes launching into a season a daunting task for newcomers to the world of simulation racing. The believable modelling of things like rainfall, tyre degradation, and even the drying and rubbering in of tracks add a great deal to this deep and enjoyable simulation, and the damage modelling is generally impressive too. Break a front wing and you not only see realistic impact on your vehicle as you lose sections of chassis, but you immediately feel a loss of grip. The damage modelling can be seen at its best when two racers in front of you collide and you see parts from both cars explode across the track--something that's fairly common as you head into the first corner, or when less-experienced drivers are over-ambitious in the wet.

If all you want to do is get into a car and race, F1 2010 has you covered. You can create custom races individually or as part of a series, and each can last as little as one lap. Alternatively, taking part in time trials is a great way to both familiarize yourself with the game's 19 tracks and to see how your times compare to other players' on online leaderboards. If you want a meatier challenge, then custom Grands Prix can be set up to follow whole race weekends with full-length races, or you can dive into the game's extensive career mode.

When you start your career, you begin as the second driver for one of the lower-ranked teams and then work your way up to eventually become a lead driver for one of the top teams where you have a realistic shot at the championship. This makes for a rewarding challenge, but it's disappointing that even with the shortest career--which runs for three seasons--you have to start at the bottom and can't simply race for three seasons (or at least start your career) with the team of your choice. It's also unfortunate that only the lead driver can drive technical development for the team, because progress through the ranks is quite slow, and so you have to devote a good number of hours to getting yourself into a position where you can develop the car you actually want by opting for engine research over aerodynamics research, for example. Hitting your team's targets in the career mode rewards you with upgrades, whether you're directing the research or not. For those willing to put the time in, however, getting to the top of the sport, even in the three-year career, is immensely satisfying. Given that in the career mode you have to participate in three sessions--one practice, one qualifying, and the race--and the minimum distance is 20 per cent of the full Grand Prix, even a short career is a serious time investment.

On the track, there is very little to complain about. The racing is fast and realistic, opponent AI is good on higher difficulties, and the way car handling changes as races wear on is impressive. Details such as the type of tyre you've opted to use make a significant difference, as does the fuel load in your car. Tyre wear is also modelled really well; you can see tyres starting to degrade in realistic fashion, and the handling of the car changes significantly and realistically as grip falls away along with the surface of your tyres. The way that grip is dependent on track position is another pleasing touch in this vein; whether it's a dry race that has a well-rubbered racing line or a sheltered section of track that's not as wet as the rest of it, you are rewarded for picking the right line.

The simulation of F1 isn't quite complete, however. There are no safety cars deployed even in full-length races; the only mechanical failures in races other than tyre wear are those caused by impacts; and poor AI in overcrowded pit lanes can lead to much longer stops than are realistic as AI-controlled vehicles seemingly taking priority. The way the game presents information and the amount of information shown in-game are likely to disappoint many sim fans. Telemetry information is almost nonexistent, except for colour indications on car parts that alert you to damage or non-optimal temperatures, and there's no actual fuel gauge--just an indicator when you're running low which appears when you have three or fewer laps left.

Car setups are also a little opaque. While you've got the option of choosing from a number of automatic setups from your engineer in the garage, these relate only to the dampness of the overhead conditions, and there's no feedback on what is required for the individual circuits. You can manually tweak everything from wing angles to gear-shift ratios, but there's little help offered outside of the engineer's defaults. Since you need an in-depth knowledge of not only mechanics but also the courses in question to be able to make any sense of the myriad settings, F1 2010 options may well frustrate even the many F1 fans who know enough about the sport to know that Monaco requires more downforce than Monza, because they aren't sure how to implement that in-game.

Unfortunately, both newcomers and seasoned sim fans are likely to be put off by the inadequate provision of information. Even some of the most basic information is lacking. For example, in races, it's difficult to gauge where you are in relation to other cars because you're shown only lap times rather than race times. And in qualifying sessions the target time required to make it through to the next session isn't made clear. Someone new to the current rule set for Formula One would probably be confused by the three-part qualifying sessions present in full race weekends, as it's never made clear that you need to be in the top 17 to make it through to the second session. It's also not readily apparent how long it will take your car to get back out onto the track after a stop, and while session timers do appear onscreen for the last five minutes of any session, you're not warned when attempting to enter a last-ditch flying lap that the session will have ended by the time your flying lap starts.

There are plenty of multiplayer options in F1 2010, most of which are only available online. The inclusion of a turn-based time trial party mode goes some way to compensating for the unfortunate lack of split-screen support, but this mode is tarnished somewhat by inflexible rules and long load times between sessions. The lag-free online modes provide a good mix of fixed challenges and fully customisable online Grand Prix races. The quick modes let you jump into preset races with little bother. Sprints are simple three-lap races in the dry, while others feature dynamic weather and pit stops. Endurance races are one-fifth-length Grands Prix, Pole Position simply gives you a qualifying session in which to trade lap times, and the final mode has a 15-minute qualifying session followed by a seven-lap race. While car distribution is random in quick races, the individual teams' performance seems more evenly matched than in single-player, leading to a much more competitive feeling and dependence on skill in the races themselves.

When setting up custom matchups online, race lengths can be anything from one-lap wonders to multiple Grands Prix strung together in a mini championship. These can include qualifying sessions to determine grid position, or you can set grid position to be decided randomly or based on results of previous races or online ranking. As well as being random or user-selected, car choice can also be enforced based on rankings--and both can be set up by the host to distribute cars and grid places in reverse order as well, which adds a nice range of variety among friends with mixed skill levels. The one downside is that there are no options for teams to race online. Grids are also limited to 12 drivers online, with only one driver from each team taking part.

Whether you're skidding around the Bus Stop at Spa in the rain or tearing out of the Parabolica preparing to hit the pit straight in Monza, F1 2010 does a good job of re-creating the excitement and action of driving a Formula One car. Clearly there is still room for improvement, but despite its occasional quirks, F1 2010 is a game that any fan of Formula One or simulation racing would do well to take for a spin. 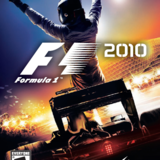