Whether or not you'll take to A Fistful of Boomstick will hinge primarily on your appreciation of Bruce Campbell's speaking voice and your love of cheesy one-liners.

It seems unlikely that Sam Raimi and Bruce Campbell could have known just what they were starting back in 1981 when they shot a tiny independent horror film called Evil Dead on a shoestring budget. Yet, here we are, 22 years later, with a hyperstylized indie sequel/remake, a bizarre high-fantasy sequel, a video game, and a massive cult following. Now, THQ and VIS Entertainment are trotting out Bruce Campbell's Ash character and the twisted deadites once again for Evil Dead: A Fistful of Boomstick. The gameplay is a mix of sloppy third-person action and even sloppier puzzles, putting the weight of the game squarely on Ash's tongue-in-cheek macho colloquialisms. Whether or not you'll take to A Fistful of Boomstick will hinge primarily on your appreciation of Bruce Campbell's speaking voice and your love of cheesy one-liners.

As has become routine for the character, Ash once again finds himself dealing with a mess of the wicked zombies known as deadites, this time thanks to a bow-tie-and-monocle-wearing archaeologist and a ditzy TV host who unwittingly unleash the undead on Ash's hometown of Dearborn, Michigan. As usual, it's up to Ash and a heaping helping of machismo to send the deadite horde back to hell. Ash won't have to leave the Dearborn city limits to get the job done, but he will have to travel back to Colonial and Civil War-era Dearborn before he's through.

A Fistful of Boomstick forgoes the slower survival-horror pacing found in Evil Dead: Hail to the King, THQ's previous Evil Dead game, opting instead for more-straightforward action. The game quickly equips you with Ash's signature combo of a double-barreled shotgun and an arm-mounted chainsaw, and though you'll find a wide variety of other weaponry, including dynamite, Molotov cocktails, an assortment of handguns, a flamethrower, and a Gatling gun, the simple pairing of chainsaw and shotgun will serve you well for the majority of the game. The deadites are generally slow and not too smart, and they're really only dangerous in large packs. Though most deadites end their term in a spray of giblets and dismembered limbs, the combat itself isn't so satisfying. If you have sufficient ammo, which the game is pretty generous with, you can usually just auto-target your enemies into oblivion from a safe distance. When you get up close, the most you can really do is break out a three-swipe combo with the chainsaw, which gets old fast. The game throws a few boss fights at you, and though they're slightly more strategic affairs than the standard combat, none of them are terribly challenging.

Using spells you pick up along the way combined with the energy of felled deadites, you can also shoot lightning, stun groups of enemies, increase your strength, or possess the carcass of a deadite and turn it against its comrades. The spells require you to hold a shoulder button while pressing a specific string of buttons, a system that's ultimately too clumsy for use in combat. The spells prove themselves more useful in solving the game's many puzzles, which are the root of most of the frustration in A Fistful of Boomstick. Most of the puzzles take very little effort, and are of the pedestrian "find the key to open the door" or "find the item to give to the guy to get the key" variety, but you'll regularly be presented with vague objectives, making it needlessly confusing to accomplish simple tasks. Compounding this problem is the game's complete and total lack of a mapping system, which will force you to spend a significant amount of your game time just running around, familiarizing yourself with the level layout or simply being lost. Had the designers focused more intently on one of these elements or the other, the experience might've been more compelling, but as it stands, neither the combat nor the puzzle solving is very engaging.

A Fistful of Boomstick was developed by VIS Entertainment, the makers of the delectably violent State of Emergency, and the game uses the same engine as that frantic riot simulator, though not nearly as well. Detailed environments and high-polygon character models were forsaken in State of Emergency in favor of massive swarms of people all moving in different directions at once. In A Fistful of Boomstick, the environments are larger, and there are significantly fewer people around, but the textures still look simple, the level geometry is still blocky, and character polygons are still used sparingly. The character models are recycled with gleeful abandon, and it would even seem that some of the character animations from State of Emergency have been folded into this game. What's worse is that much of the game puts you in Dearborn during different historical eras, which means that you'll be going through slightly modified versions of the same level several times. The primary differences between the Xbox and PS2 versions of A Fistful of Boomstick are in the aliasing and the clarity of the textures, with the Xbox version looking sharper and cleaner. Oddly, though, the PlayStation 2 version's dirtier graphics feel more faithful to the subject matter, as part of the appeal of the Evil Dead franchise has always been its gritty, low-budget production values.

Zombie slaughtering aside, Bruce Campbell's vocal chords and attitude have become the primary draw of the franchise, and the game banks big on the appeal of Ash's absurdly brash candor. This actually might've worked with better writing, but the new material is unfunny and hackneyed, and the material drawn directly from the films just feels forced. It would've helped if Bruce Campbell had put more heart into the voice acting, but as it stands it seems pretty clear that he just did this one for the paycheck. Save for the inordinate amounts of bad comedy, the in-game sound effects for your arsenal and the destruction you create with it are passable, though the sound design is marked by a melodramatic score that swells whenever there's action and subsides shortly thereafter. In theory, this is a good mechanic for heightening tension, but in A Fistful of Boomstick, the transitions are abrupt, stealing away much of the effectiveness of a dynamic soundtrack.

Though the game specifically targets the niche market of gamers who already have a strong propensity toward the Evil Dead franchise, even fans of the films will likely be disappointed by what A Fistful of Boomstick has to offer. If it's Evil Dead you want, you're better off going back to the films. If it's a satisfying action game you're looking for, look somewhere else. 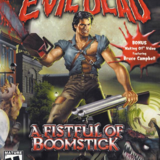 Evil Dead: A Fistful of Boomstick
Follow
$99.99 on Walmart
Buy 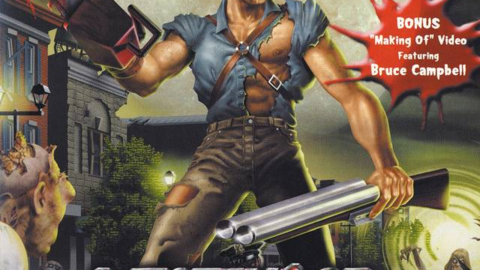 Evil Dead: A Fistful of Boomstick

Whether or not you'll take to A Fistful of Boomstick will hinge primarily on your appreciation of Bruce Campbell's speaking voice and your love of cheesy one-liners.

7.3
Sign In to rate Evil Dead: A Fistful of Boomstick