The Everybody's Golf series has consistently hit that sweet spot in providing arcade-inspired accessibility while preserving the unique challenges that make the sport of golf riveting. As its first foray on the PlayStation 4, the simply titled Everybody's Golf not only continues this tradition but also expands the franchise's specific brand of golf culture. This is embodied in an involving hub world and the new option to freely roam courses to pursue leisure activities beyond actual competition, shaking up the franchise into a fresh golfing experience.

Everybody's Golf--which is a reversion to the Japanese series' name 20 years after it was named Hot Shots Golf in the West--effectively captures the strategic demands of the sport and the myriad variables that professionals consider when planning a shot. Choice of club, wind speed and direction, and yardage are the commonly known factors, but there's also the lie of the ball, the surface that the ball is projected to land on, the part of the ball you choose to make contact with, and so on. Hitting a great shot as a result of considering all these ingredients is the beauty and attraction of this series. Having this substantive sense of control never gets old, especially when you have slightly less control over the precise act of hitting your ball.

Thankfully, developer Clap Hanz has never strayed from the classic video game three-click swing mechanic: click to start, click to set power, and a final click to determine accuracy. The trick is in matching your desired meter length with what your reflexes can pull off, and attempting to tighten that gap swing after swing is one of the most involving aspects of Everybody's Golf. Moreover, this control method has always been more sensible than the less predictable back-and-forth motions of swinging with the analog stick, a feature common in other contemporary golf games.

Your career in Everybody's Golf grows on a swift RPG-inspired progression path, where nearly every good shot yields minor performance bonuses affecting both your stats and the clubs you use. In other words, you and your equipment earn experience points. Over the course of several rounds of golf, those upgrades from hundreds of shots add up. It's both rewarding and motivating to see stat meters grow in areas like power and backspin. Adding to these dopamine hits are the awards and unlocks for ranking up and placing in the top three in tournaments against the CPU, which include items such as specialized clubs and balls. Like building an armory of weapons, you feel accomplished when amassing a range of diverse equipment to suit both your play style and the unique layouts of each course. It's especially gratifying to replay the earlier, simpler holes with new gear and increased stats, allowing you to score eagles with regularity instead of pars.

The player's modest beginnings and basic gear also serve to make Everybody's Golf immensely accessible to newcomers. Your starter clubs and balls suit the friendly layout of the first course, Eagle City Golf Club, where--like real golf--making par is the yardstick that competence and skill should be measured. Averaging par in the first half dozen rounds is cause for celebration and sets you on the very long road to pulling off feats that would rank you in the top 10 of the PGA Tour. Naturally, this can make the initial hours a cakewalk for Everybody's Golf veterans, which is why a well-implemented "Serious Mode" option--where the AI-controlled field posts better-than-usual scores--can be toggled on and off before any tournament.

The career matches against the CPU are not without their difficulties, but the truly humbling competitions are against your peers online. While its asynchronous multiplayer--where you play at your own pace and compete on daily leaderboards--has been one of the series' main draws, the new Turf War mode is an even more engrossing format. Two teams of up to 10 per side compete in a timed match where you attempt to play as many holes as possible. Since this mode uses the free-roam version of the courses, half the rush is effectively managing your time when travelling from hole to hole, whether it means running, driving, or spending a limited-use fast travel teleporter. It's a balancing act of playing quick and playing well, and if you pull off both, you have a chance at winning the MVP award. In a match of 20 competitors, that prize is a well-earned badge of honor, reflected as a number next to your username that shows other players how many MVP awards you've won.

Whether you're primarily an online competitor or someone who prefers to face AI opponents, your time in between matches is spent in the hub world or roaming freely in the courses you've unlocked. Both types of areas encourage exploration since there's a scattering of consumable items like speciality golf balls and extra warp privileges for Turf War. The most appealing features of the hub are rewards you earn as you surmount hurdles in your career. Defeating a boss who is also a race car driver, for instance, grants you cart privileges, while outplaying a fisherman in a round of golf unlocks fishing mode. The button-mash mechanic of fishing can prove monotonous over time, but it doesn't completely diminish the appeal of casting a rod next to the courses' ponds and lakes. Not only is it a challenge to collect dozens of fish varieties, but many of these specimens carry the same aforementioned consumables.

The new multi-course golfing paradise filled with NPCs does add charm to an already endearing series. Where it goes one step too far is during the single-player tournaments. Three of the 15 CPU competitors you face in these contests are part of your foursome, NPCs who play at the own pace and are visible as you play the same hole. It's not so much a distraction as it is a mild annoyance to see fast-moving golfers clutter your screen as you're focusing on your own shot. It's not uncommon for them to obscure the camera during your birdie or par celebrations. At least there's no AI ball or character collision that would affect your round.

Ultimately, these bothersome NPCs are the only notable blemishes in an otherwise splendid and activity-loaded sequel, which also happens to be the best golf game on the PlayStation 4. Longtime fans will find comfort in the familiar controls and deep progression system, while newcomers will find the on-boarding experience easy and welcoming. Between the lengthy career mode and online play, you are never short of competition to test your nerves. And no matter how ridiculously superhuman your linksman skills become--there are awards for getting a hole in one on a par-5, after all--Everybody's Golf's strict adherence to the sport's strategic underpinnings is never compromised.

View Comments (39)
Back To Top
8
Great
About GameSpot Reviews 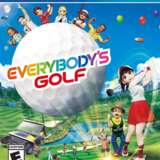 It look Miguel about 25 hours of tour competition to reach Everybody's Golf's end credits, and he spent an additional five hours checking out its online modes. A code was provided by Sony for this review.