For over a decade, the Etrian Odyssey series has been keeping the old-school dungeon crawler RPG alive and well on the DS console family. We've created our own adventurer's guilds and party members time and time again, painstakingly drawn tons of dungeon maps step-by-step, and slain countless numbers of deadly enemies in turn-based combat. Etrian Odyssey Nexus is the series' swan song on the 3DS, and it's a farewell celebration well worth attending, combining many beloved elements from across the whole of the series.

As is usual for the Etrian Odyssey series, you find yourself almost immediately thrust into the game's main story. The floating islands of Lemuria are filled with strange, unexplored lands and a Yggdrasil tree, the secrets of which adventurers come from all the over the world to discover. You must assemble a guild of adventurers, name them, customize their looks and voices, give them basic adventuring skills, and gather them together in a party to explore the mysterious floating islands, dungeon by dungeon, floor by floor.

Character creation and customization in the Etrian Odyssey games has always been a key component, and in Nexus, it's taken to new heights. The interesting fantasy races of Etrian Odyssey V (and their various race-based bonuses and skills) are gone, but that's fairly easy to forgive considering that you have a whopping nineteen classes from across the entire series' history to choose from at the beginning of the game for each character, giving you an incredible amount of freedom in constructing your own personalized band of explorers.

It can be a bit overwhelming at first to assemble an effective party out of the huge amount of choices you're given, especially when several classes have overlap--for example, Pugilists, Ronin, and Ninjas are all "glass cannon"-type classes that emphasize offense and speed over defense, but each will evolve and function very differently over the course of the game. Things get even more in-depth with sub-classes, which become available much later in the game and provide yet another layer of intense customization, allowing you to either augment character strengths or compensate for weaknesses with additional skills from other classes. Sub-classing isn't new to the series, but this feature unlocks far later in Nexus than I had hoped, leaving me sitting on banked skill points I probably could have better used to boost main class skills.

At the very least, if you're unsure which classes would work well in your ideal composition--or you just want some backup you can swap in as situations dictate--you can create a few extra party members and keep them in reserve at the adventurer's guild. You'll get an item early on (the Memory Conch from EO5) that will let you give some EXP earned to members in reserve, so you don't have to level-grind to make lesser-used teammates and new additions viable.

Similarly to Etrian Odyssey IV, once you venture outside of town, you're not given one gigantic dungeon to explore floor by floor but instead presented with a world map that grows as you progress through the game, with multiple sub-areas and dungeons that you explore and map out individually. The airship-flying exploration sections of EO4 that connected these dungeons are gone, replaced with a very simple map you select locations from, which is a bit disappointing since it means fewer fun expeditions and less discovery outside of dungeons--but it also eliminates many of EO4's exploration frustrations like having to navigate hazards.

The meat of Etrian Odyssey, however, has always been its dungeon exploration, and Nexus does not disappoint in that regard. You wander through intricate labyrinths step by step, exploring every nook and cranny for treasures, exits, gimmicks, and various points of interest, jotting all of your findings down on the map on the 3DS's touchscreen. The dungeons themselves take on lives of their own as you spend hours within them; they're filled with distinct graphic flourishes, unique hazards, and terrifying enemies that give a sublime sense of ever-present danger to the often-serene environments. Longtime fans will also recognize callbacks to previous titles in some very familiar enemies, areas, and musical tracks presented throughout the game.

While most of the core Etrian Odyssey games outside of the Untold spin-offs have less of a focus on story than other RPGs, Nexus' storytelling is a high point for the series as whole. EO has traditionally let its story unfold through gradual exploration and careful, well-placed NPC dialogue when necessary, rather than through lengthy text dumps and cinematics. Over the course of the Nexus adventure, you encounter numerous NPCs both in town and while exploring, all of whom have flavorful dialogue and well-conveyed personalities without being overly wordy. You also encounter various points of interest in the dungeons, described to you in richly detailed text as if hearing it from the mouth of a storyteller, where you have to make careful choices about how to proceed. It's all fantastically done and does a spectacular job of letting you feel like part of the world without being overbearing.

Nexus' storytelling is a high point for the series as whole... It's all fantastically done and does a spectacular job of letting you feel like part of the world without being overbearing.

There's not much new to combat--it's still turn-based, and you've got the Force Boost/Break system from Etrian Odyssey Untold 2 for every class--but it's just as intense as ever, with even low-level enemies poised to offer a serious threat if you aren't paying attention. The flora and fauna of each area varies slightly, requiring you to do your homework and observe enemy types and their attacks--especially the FOEs, extremely dangerous enemies that roam the dungeons (usually in patterns) and can absolutely wreck you if you bumble into battle unprepared. Sometimes, however, it feels like Nexus' pacing in terms of hazards and enemy threats feels off.

I played on standard ("Basic") difficulty, and there were a few times where I'd finish one dungeon and head to the next only to get totally trounced from the standard enemies there, as though I were still a few levels behind. There are also a few points where the game springs some major battles on you without much warning. For example, at one point fairly early on, there are two major boss battles one right after the other, the latter being a complete surprise. While you do get a free health refill between these two fights, springing the extra battle on you so early without giving you a chance to regroup is rude and exhausting even by the series' standards of challenging encounters.

Despite a few small stumbles, the grandiose adventure Etrian Odyssey Nexus delivers is a rewarding, engaging journey you'll be glad to take. The feeling of discovery as you and your band of merry adventurers venture bravely into the unknown, fighting one fierce battle after another and growing stronger along the way, is tremendously fun, and Nexus does it better than any other game in the series yet. This is definitely the last EO game on the 3DS, and it has an air of finality to it that makes it feel like it could be a closer for the series as a whole--which I hope isn't the case. I'm ready for many map-making expeditions in the future. But if this really is the end, then Etrian Odyssey goes out on a high note. 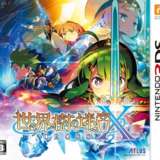 Heidi is a veteran when it comes to mapping out dungeons and building her characters. She's played every Etrian Odyssey game that's been released in the West, and she hopes that this won't be the last we see of the series.