Ethereal Review - Stay In Your Lane

A change of perspective.

By restricting traditional movement and thrusting you into carefully constructed 2D mazes, simply getting around Ethereal's levels presents challenging conundrums that are deeply satisfying to overcome. Despite some uneven pacing and technical issues marring the overall experience, Ethereal is a delightful game that contrasts a soothing ambiance with intricate and challenging puzzle designs.

Ethereal's opening is mysterious, but not in the best way. Starting in a monochrome world with harsh black and white streaks across the screen, it's difficult to make sense of your surroundings and options. It's an unnecessarily confusing introduction to Ethereal, which otherwise takes care to slowly introduce new mechanics before nudging you towards increasingly complex puzzles.

Outside of its central hub, Ethereal is wonderfully colorful. Your avatar leaves inky streaks of color behind them as they move, corresponding to a limited but carefully chosen palette that paints the walls around you with bright hues. A fish-eye style lens warps each world near the edges, making it feel like you're traversing a wrapped around globe rather than an endless 2D plane set on top of a harsh white background. Ethereal's stylings are subtle but work well together, producing a distinctive look that never wears thin.

Movement in Ethereal is central to its puzzles. You're restricted to sliding across 2D planes, with carefully placed walls blocking your progress. You overcome them by hopping through the closest wall either above or below you, shifting you into an entirely new row to move across. It's slightly confusing to wrap your head around at first, but getting the hang of seamlessly moving around each stage is satisfying to learn. Identifying patterns in level layouts lets you quickly zip around each of them, allowing you to reach your objectives with ease and comfortably map a route to your exit once you're done.

Each stage tasks you with obtaining a series of color-coded shapes in sequential order. It's easy to see where most are placed as soon as you enter a level, but reaching them in the order required is rarely straightforward. Although levels are small, they are labyrinthine. They are sometimes made overly complicated, with unnecessary routes and obstacles littering the peripheral of the main stage and baiting you into considering red-herring routes. Misdirection is a core principle of well-designed puzzles, but Ethereal doesn't make it easy enough to rectify a foolish misstep. You'll typically have to redo all your previous moves in reverse to get back on track, which is more confusing than it should be. It quickly becomes frustrating, making each error feel more like a waste of time than a constructive learning experience.

Thankfully, Ethereal's 24 unique puzzles don't struggle with variety. Early ones simply rely on the freshness of the game's movement to generate complexity, but it's not long before new interactions change how you think about moving through each level. One will rotate the level by 90-degrees, for example, turning previously insurmountable walls into new points for you to hop between. Another creates a black, negative space that offers a larger range of movement, which gives you the ability to move walls and alter a level's layout.

These mechanisms are introduced intelligently too, by first appearing in the hub world that precede levels designed around them. Their simple introduction whets your appetite while the larger puzzles they're used in build upon their numerous possibilities in inventive ways. At first, each stage is centered around only one of these mechanics at a time, but puzzles get increasingly challenging as Ethereal starts combining them. The difficulty curve can feel a little steep around the half-way point, and remains a little uneven up until the end, but Ethereal rarely feels unfair, only dipping into frustration when technical issues get in the way.

There were numerous instances where, after interacting with one of the aforementioned mechanisms, a bug inexplicably transported me to another end of the level--often in a position that made movement impossible. In these instances, the only solution is to restart the level entirely, which is frustrating given how long some stages can be. Having to tediously repeat numerous movements in order to return to the same spot you were before is frustrating enough, but occasionally encountering the same bug numerous times in the same level is infuriating.

Ethereal's soothing ambient soundtrack and delightfully catchy sound effects do alleviate the frustrations to a degree, while its ever-changing aesthetic is suitably elegant and effective at keeping you engaged with its puzzles and not distracted by unnecessary visual information. The soft water colors of each stage shift with each objective you reach, eventually being diluted into a simple monochromatic theme once you've finished. It's an effective way to measure your progress through a stage and help inform you of what color shape you've just cleared from the stage without the need for a HUD. Ethereal's visual simplicity echoes its ease of control but doesn't compromise its beauty in the process.

Ethereal's 24 puzzles shouldn't take that long to complete, only overstaying their welcome when technical issues force you to repeatedly restart them. Although there are also a few uneven spikes in difficulty, the game's inviting visuals and soothing sound effects dress puzzles that are intelligently designed around your limited mobility. Ethereal is a satisfyingly challenging and unique puzzle game that serves as a delightful way to spend an afternoon. 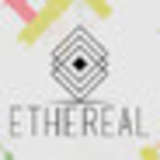 Alessandro spent around six hours completing all of Ethereal's puzzles, and bagging a handful of secret collectibles to boot. He still has the catchy sound effects stuck in his head, and doesn't mind it one bit. A code was provided by the developer for the purpose of this review.