Elegy for a Dead World Review

Requiem for a dream.

"What is Elegy for a Dead World?" you might ask, though the answer is as ephemeral as understanding particle/wave duality, or describing love to one who has never felt it. It is an interactive writing tool and an exploration game that provides no answers and expects you to supply them. It is a complex game of Mad Libs in which you enter some, many, or all words to the story you wish to tell about the otherworldly panoramas before you. And, if you like to write but frequently find yourself at a loss for words, it is a muse, poking and prompting you to put your fingers against the keyboard and let your voice be heard.

You may think of a muse as an ethereal goddess who blesses you with magical inspiration, but as any creator knows, this is not the muse's modus operandi. Says Stephen King in On Writing, "You have to do all the grunt labor, in other words, while the muse sits and smokes cigars and admires his bowling trophies and pretends to ignore you." Elegy for a Dead World is your cigar-smoking fairy. It invites you into one of three landscapes, which you access via a central screen that shows you hovering in front of a rotating nebula of purple and pink. "You," in this case, is a helmeted astronaut of indeterminate age and indeterminate gender. This wanderer of the cosmos may indeed represent you, or may instead represent someone or something else, entirely a product of your imagination. The figure's anonymity is vital to Elegy for a Dead World's success, for the stories you create allow you to assign it any role you wish.

And so you seek your muse in one of those worlds, which you walk or float across in two dimensions. One world is characterized by its red and orange skies, temples lit by glowing candles, and structures that frame the nighttime moon, which dominates the heavens. In the next, the remnants of past labor prevail. You pass by hovels and machines as you move forward, and suddenly another edifice looms large--a university, or perhaps a courthouse. The remaining world is blessed by life; upon entering, a cyclopic gazelle grazes in front of a colossal sculpture depicting three giants bearing the burden of an entire planet upon their shoulders. You may wonder what secrets this trio of kingdoms might harbor, but it is not for the game to supply them.

No--illuminating secrets is your role. Elegy for a Dead World provides you a structure, and then sits back and waits, smoking cigars while you do the work. Before entering a world, you choose the framework for your story. A framework called Letter to a Loved One suggests you tell your beloved why he or she would love this particular place, for instance, and begins with the line, "You'd like it here; _____. There are worse places that _____." As you press on, you encounter prompts that require more input, and eventually, a tale forms. You aren't confined to elaborating on pre-written blurbs; you may delete those words and take your own journey, and each world offers a freeform option that allows you to write wherever you like. But the frameworks represent the muse's creative injections, and there are enough of them to suit writers of all skill levels, if not necessarily all interests.

The boundaries on subject matter are inherent to the game. These are science-fiction worlds, and while you could ostensibly use them to tell all kinds of stories, Elegy for a Dead World's imagery naturally limits you. In most ways, the limitations are a function of its design: writers, like other artists, often flourish when confined; limits are defined by genre, medium, occasion, and commission, and allow the artist to get deep and specific rather than broad and general. But Elegy's vital limitations lurk within its predetermined frameworks, and needn't have manifested in its relatively small, similarly themed worlds. You can write what you wish, but should you want your story to consistently reflect the landscape, you must accept what the muse provides. He's fickle that way.

Don't presume, however, that Elegy for a Dead World doesn't provide ample creative freedom. I have used a library as a backdrop for a miniature autobiography, which proved an effective exercise in brevity, a quality for which I'm not known. In another world, I used prearranged stanzas to craft a raunchy poem I can't print here. You can name and publish these stories, which appear with still images that match the environments that inspired them, as well as browse other players' creations. You would suppose most popular stories would reflect the somberness of the game's visuals, but players' stories often begin with such hysterical lines as "There are TBone steaks in the sky" and "When I have fears that cannot be soothed, I reach for an ice cold Coors Light." It seems some imaginative souls refuse to be restricted after all.

Appropriately enough, Elegy for a Dead World's potential impact lies as much within you as it does within the game. I imagine many people might download, play, and scoff, wholly alienated by a creation tool that expects so much and provides so little. And there are times when I open the game only to stare at it for a few moments, become blinded by my own lack of artistic vision, and then shut it down in favor of entertainment that expects less of me. Yet there's nothing like Elegy for a Dead World, a muse in the guise of a narrative creation tool in the guise of a video game, and it’s within those layers that you find the treasures. 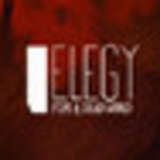 Kevin VanOrd spent about eight hours with Elegy for a Dead World, writing and reading stories until his creative well went dry and was filled again.