Ecks vs. Sever is a good, solid game that gets the job done in a simple, effective way.

Early on in the life of the Game Boy Advance, many players wondered if a first-person shooter would ever appear on Nintendo's new system or, for that matter, if it would even be technically possible. Only a few short months later, the handheld has seen several FPSes in the form of Activision's port of the classic shooter Doom, as well as others like Backtrack. Now, Bam! Entertainment is bringing its own new game, Ecks vs. Sever, to the platform.

Developed by the UK's own Crawfish Interactive, this first-person shooter is a technically impressive sight to see on the GBA, especially so early in the console's life. However, it seems that in order to bring such a game to this handheld, Crawfish had to strip down Ecks vs. Sever to its barest essentials and even take it back to the very early days of the genre. In fact, many older gamers may pick up the game and be reminded of such games as Rise of the Triad, Wolfenstein 3D, and the like.

You begin the game simply enough by choosing one of two playable characters, FBI agent Jonathan Ecks or the mysterious NSA operative Sever. The first couple of missions start out very easily to provide some training for what's to come. Once you make it past these levels, the game takes an interesting turn by offering missions that directly intersect with the other character. For example, Ecks plays the role of a sniper in his mission, while Sever must avoid being sniped in hers. While it would have been easy enough to just throw in a second character, Crawfish has taken the steps necessary to provide you with a compelling reason to play through with both characters.

In addition to the crossing paths of the two characters, Ecks vs. Sever has a storyline steeped in the hard-boiled crime found in spy films, which, early on in the game, touches on murder, terrorism, and other violent aspects. The story almost seems out of place for a handheld system. Upon playing the game, you can't help but get caught up in the storyline delivered before each level by way of simple scrolling text. While some form of graphical cutscene would have been nice to help move the story along, it does leave much up to your imagination and is nonetheless engaging.

As previously stated, this game is very rudimentary in many aspects, very much so in the way that it plays. With simple level design and enemy AI that is so dumbed down that it is virtually nonexistent, Ecks vs. Sever doesn't pose much of a threat in the difficulty department. Seasoned veterans of the genre should be able to whip through the game in no time at all, and even those who are unfamiliar with this type of game will be able to have fun without getting frustrated. The controls in this game are simple enough to use, with the D-pad controlling movement, the A and B buttons opening doors, switching weapons, and firing, and the two shoulder buttons handling any strafing necessary. At first, the controls seem to be a little loose and take only a short amount of time to get accustomed to, but once you're able to get over this little hurdle, you should be able to play the game with relative ease. Like most first-person shooters, Ecks vs. Sever comes with a host of multiplayer options by way of linking up to four systems together and is a great complement to the single-player game.

Graphically, this game is quite impressive for a handheld, but after you play the game for quite some time, the simple graphics wear a little thin, especially when you get close to an object, rendering it a blurry mess of pixels that is at times hard to decipher. In keeping with a lo-fi feel, the level design is simple, but also confusing at times. Ecks vs. Sever also keeps things pretty simple in the sound department. There is no music to be spoken of when you're actually playing the game, and the only sounds you'll actually hear are the simple environmental sounds and gunshots.

Ecks vs. Sever is a good, solid game that gets the job done in a simple, effective way. Older players might not be as impressed because of how old the game seems, but the simple fact that the GBA can actually deliver a decent first-person shooter is an achievement in its own right. Anyone who has any interest in the genre and owns a Game Boy Advance certainly won't go wrong with Ecks vs. Sever. 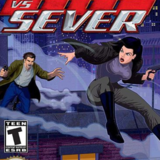