Anchored by a wonderful cast of characters, the very well-crafted sci-fi story in Dreamfall will leave you anxiously wanting more.

Dreamfall: The Longest Journey is, first and foremost, a great work of science fiction. Such a complex plot, endearing characters, and imaginative settings and situations are highly uncommon to gaming, or any medium for that matter. Those familiar with the game's predecessor might expect no less, since it's widely considered one of the best adventure games ever made. Judged as a follow-up to a beloved classic, Dreamfall does not disappoint, for the most part. It exhibits the unique attention to detail and terrific presentation that made The Longest Journey so remarkable for its time. But Dreamfall also does an excellent job drawing in new players as well as those fans patiently awaiting this sequel. The actual gameplay is a blend of action adventure conventions, but it clearly isn't the main draw. It's there to help make the story more engaging, and that's more or less what it does. Yet, as impressive as the story is, it ends too quickly to leave you feeling fully satisfied when you finally reach the game's bewildering, enlightening, frustrating, thought-provoking conclusion. Is the journey itself worth your while, though? Absolutely, yes.

More than six years ago, The Longest Journey introduced one of gaming's most memorable heroines, a smart and resourceful young woman named April Ryan. April happened to possess a latent ability to "shift" between worlds, from her familiar (yet futuristic) home to a magical place called Arcadia. These parallel worlds of technology and magic had fallen out of balance, and the reluctant April became the key to restoring harmony between the two--but at what cost to her and her friends? At any rate, you don't need to know what happened to dive right into Dreamfall, which is deeply connected to the events of The Longest Journey but doesn't assume you've played or remember that game. If you haven't or don't, then upon finishing Dreamfall, you'll probably want to go back and play The Longest Journey. It's certainly better as a pure adventure game than Dreamfall is, in case you were wondering. Dreamfall doesn't seem to have nearly as many complicated puzzles in it, but on the flip side, that means you can enjoy this story without running into many roadblocks.

It's tempting to go into specifics about Dreamfall's sharply written story. But since playing through the game involved unraveling a convoluted mystery, it's best not to spoil anything. Suffice it to say that you spend much of Dreamfall playing as Zoë Castillo, a bright and attractive young woman who's not unlike April from The Longest Journey, only she's a little less cynical and she's got a lovely British accent. Zoë seems like she has it all--a high-tech room with an incredible view, a good-natured and understanding dad, and even a gentle-hearted, artificially intelligent monkey robot. But she's seen better days. She's living at home with her father, trying to decide what to do with her directionless life, having dropped out of school and recently broken up with her longtime boyfriend. She's still on good terms with her ex, though, and one day, he asks her for what seems like a small favor, for help with a story he's working on for his editor. From that point, a chance encounter sets in motion an epic series of events that'll send Zoë all across the globe, and beyond.

Zoë is a great character who's likable, charming, and sympathetic almost right away. And she'll get to meet lots of other similarly interesting characters during the course of her adventure, including some whom Longest Journey fans should recognize. The dialogue between all the different characters flows naturally, and superbly done voice acting, along with expressive 3D characters, makes all the conversation (and there's a lot of it) the highlight of the game. Dreamfall earns its M rating through a little bit of ribald humor and some profanity that's used very liberally by certain characters, and yet applied with restraint overall. For instance, you'll hear Zoë cuss in situations in which you'd expect almost anyone her age to react the same way. She leads an outstanding ensemble cast of characters, but they're not to be outdone by Dreamfall's wonderfully imaginative locales. Few games can muster up a cohesive science-fiction setting or a believable fantasy world. Dreamfall pulls off both at once, tying them together in some mind-bending ways. This is some seriously virtuoso storytelling from Longest Journey writer/designer Ragnar Tørnquist. There are so many inspired little touches all throughout the game that it's hard not to get swept up and emotionally invested in everything that's going on.

That's why it's all the more disconcerting that the game ultimately leaves so many loose ends untied. The story seems well within the author's capable control as it unfolds, intensifies, and deftly changes tone, but then it hurries to a close, practically with a nudge and a wink. Some room for continuation and interpretation can be a good thing for a story, but in Dreamfall's case, the game doesn't do as good of a job wrapping everything up as it does introducing multiple layers of conflict in the first place. In the end, you'll be left wishing for a sequel, wondering what this game could have been like had it simply been longer. It's almost painful not knowing the full breadth of what ends up happening to all these fascinating characters and this amazing world (or, worlds).

The Longest Journey was a point-and-click adventure game, whereas Dreamfall plays more like an action adventure game, letting you directly control the character as you explore and run around in detailed 3D landscapes. There's a little combat, which is easy and very basic. There are a few inventory puzzles and other fairly simple puzzles that take the form of hacking or lock picking. There are a number of environmental puzzles and a few stealth sequences. And, other than that, there's a whole lot of character interaction. Some dialogue sequences prompt you to decide how your character will respond--such as confrontationally or apologetically. These bits make the exchanges of dialogue that much more engaging, though as difficult as these decisions may be when they arise, they usually bring you to the same result.

To the game's credit, a number of its puzzles are open-ended enough to let you solve them in a few different ways, such as by sneaking past a dangerous situation, talking your way out of one, or fighting for your life. But overall, there just isn't a ton of actual gameplay in Dreamfall. Especially at first, both the action and the puzzle solving take a backseat to dialogue and exploration. And yet, strangely enough, this works to the game's advantage. The one or two times you might get stuck trying to figure out the solution to one of the game's tougher puzzles will be when you realize how refreshing the brisk pacing of the story is for the most part.

The game controls quite well. The camera can get a little awkward in tight quarters, but since there aren't many action sequences, this is almost never a liability. Numerous objects in the environment become highlighted as you approach them, and you can also examine them from afar. Your character's initial observations about a given object may reveal more information, prompting you to take a closer look. Or, similarly, you might observe new things about someone after having spoken at length with him or her. Better yet, since Zoë isn't the only character you'll get to play as in Dreamfall, it can be really rewarding to visit the same places from different perspectives. In one remarkable little moment, your control shifts between two different characters conversing with each other, effectively letting you direct both sides of the discussion. Also, while you might initially find yourself wishing you had access to a map, none of the game's areas are so expansive as to require one. You'll sooner appreciate being able to explore all these places at your own pace while soaking in the detail.

The differences between the PC and Xbox versions of Dreamfall are slight. On the PC, you've got your choice of keyboard, mouse, or game pad controls, or a combination of all three. Mouse-and-keyboard controls are fine, but gamepad controls are best suited. The PC version is capable of looking substantially cleaner and more colorful if you've got a good graphics card, but the Xbox version looks really nice, too. Each version supports widescreen displays, and something about this game makes it beg to be played in a panoramic view. While there are some blurry textures here and there, and the character models aren't made up of a relatively huge number of polygons or anything, the game more than makes up for this with its inspired, stylized visual design. The scenery throughout looks beautiful, and the characters emote believably--not only through good lip-synching but also through believable facial expressions and body language.

But the audio in Dreamfall is really the driving force behind the game's dramatic impact. The quality (and quantity) of the voice acting is terrific, and the game's soundtrack is filled with memorable and varied compositions, including a few soulful songs, and it cues up perfectly with Dreamfall's many poignant moments. Like some great score for a feature film, the music in Dreamfall is an integral part of the experience from start to finish.

Despite the far-flung premise of Dreamfall, the game touches on a number of classical themes. The importance of faith, the significance of dreams, the value of trust, and the need to be free are all woven into a story that runs the emotional gamut from excitement and intrigue to sadness and fear to relief and hilarity. Sound too good to be true? In some respects, unfortunately, it is. In the end, Dreamfall leaves you hanging. It practically pulls the rug out from under you, after setting you up to expect some sort of amazing grand finale. And to an extent, this undermines the experience leading up to that point. The game is of a decent length and will probably take you about 10 hours to finish the first time, but you'll feel like there was enough material left on the cutting-room floor for at least another five hours or so. It's also a bit of a shame that there are no extras, not even some unlockable concept art or anything like that. But you'll likely feel the urge to play through at least once more, since you'll miss some of the dialogue and subtle references the first time, and gain new insight into the story on the second run. Above all, you'll likely be left hoping that Zoë Castillo's and April Ryan's story will continue past this game, and soon. 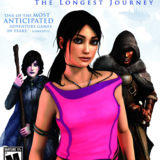