Editor's note: This review has been updated to reflect our experience with the Definitive Edition of Dragon Quest XI on Nintendo Switch. Head to the bottom of the review to see our full thoughts.

The Dragon Quest series is a standard-bearer for an entire genre. Numerous JRPGs that have come and gone over the years have adapted from--and built upon--many of the formulas Dragon Quest established in the 8-bit era. While series like Final Fantasy have transformed dramatically over time, Dragon Quest tends towards traditionalism, enshrining many of its core gameplay and story concepts from game to game.

Dragon Quest XI is no exception. The chosen hero and his growing group of party members go on a globe-spanning adventure in a realm of fantasy and magic, exploring dungeons, solving story beats to proceed, and battling foes in turn-based combat. It’s a tale you're probably familiar with if you've played any classic JRPG. But Dragon Quest XI is proof that traditions and tropes don't have to feel worn-out and dull, as this gorgeous adventure will challenge your skills, tug at your heartstrings, and keep you eagerly playing further and further into its lengthy quest.

The hero of Dragon Quest XI is the reincarnation of the Luminary, a chosen warrior who will destroy a foretold dark presence. Yet the glorious hero is not welcomed with open arms when his destiny is revealed; some fear him as a harbinger that disaster is imminent, and wish him dead. As the hero adventures from his hometown into the wider world, he makes many friends, encounters wicked monsters, endures intense tribulations, and fights for light in the shadow of an empire manipulated by darkness.

That setup likely sounds quite familiar. The story in Dragon Quest XI doesn’t really offer any novel plot beats or twists, but that's not a knock against it; the game does a spectacular job of melding familiar story elements with engaging characters and excellent choreography.

For example, a tournament sequence is something you see in a lot of JRPGs, but the presentation, characterization, and sprinkling of humor present in Dragon Quest XI’s tournament arc makes it truly unforgettable. One memorable sequence involves the hero learning about his mysterious origins and the land that he came from. While that sounds like nothing more than a genre cliché, the way it's presented here is absolutely beautiful and touching.

The characterization of the game's various personalities helps a lot in making the story and world as engaging as it is. Every member of your party has a well-developed, unique personality that accentuates their role. For example, one of the more iconic party members is the flamboyant entertainer, Sylvando. His over-the-top mannerisms, cheerful attitude, and combat prowess make him stand out, but you also get an impression that the clown act might belie something buried in his past. There are plenty of fun NPCs you'll interact with in the story as well, such as a love-starved mermaid, an eccentric dean of an elite girls' prep school, and a stunningly incompetent prince. Finally, villains like the conflicted Sir Hendrick and the cunning Jasper present a constant threat that pushes you ever-forward.

Like the story and world, Dragon Quest XI's combat is familiar and traditional, but presented in a charming and engaging way that makes it feel anything but dated.

Special praise should be given to the game's localization. While it does change quite a few character and place names from the Japanese version, it does a magnificent job of making the dialogue and overall mood of the game feel warm, soulful, and inviting. Character personalities and the flavor of various regions of the world come through in dialogue with delightful flourishes (I feel for the editor who had to write hundreds of dialogue boxes for the characters who only speak in haiku), and even incidental menu and combat text has a fun, lighthearted feel to it that makes simply running through menus more lively. And when things get somber and serious, the writing changes to match, knowing full well what sort of tone needs to be set.

Dragon Quest XI is a very linear game; you hit one story point, solve whatever problem you're facing there (be it by defeating a monster, collecting an item, beating a minigame, or various combinations of these things), then venture out to the next area where you're presented with a new story beat, slashing down mobs of enemies along the way to build up your characters' levels. You can go off the beaten path a bit to complete subquests and explore optional areas, but most locales are completely locked off until you hit a specific point in the story.

Like the story and world, Dragon Quest XI's combat is familiar and traditional, but presented in a charming and engaging way that makes it feel anything but dated. Characters and enemies take individual turns based on their agility, and you choose what characters do by either picking commands from a text-based menu or setting the CPU to act based on preset guidelines. Animations play out as blows are exchanged and spells are cast, and every so often there’s a funky little twist to the fight that livens things up, like characters achieving a "pepped up" state that raises their abilities and grants them access to special attacks.

While there's a setting in the options that allows you to physically move characters during battle (rather than having them stay in a stationary row), it doesn’t change the combat significantly; positioning doesn't affect attacks, and the fighting remains strictly turn-driven. Though it's relatively basic, little animations, messages, and quirks about combat, like enemies that fuse together or bizarre status conditions, keep you interested and engaged. Boss battles aren’t terribly common, but the big fights are truly trying, challenging you to make use of your learned spells and skills against a foe that will utterly wipe you out if you don't play strategically.

Despite Dragon Quest XI's massive length (anywhere from 60 to over 100 hours, depending on how you pace yourself and how much extra content and questing you do), it rarely feels like it’s dragging its feet. There's practically always a new place to explore, a new character to encounter, or a new threat to tackle. The game occasionally fails to maintain its otherwise steady pace--a mid-game sequence involving the search for magical orbs is particularly troublesome--but it doesn't often keep you in one place or dealing with one subplot for too long. You also won't have to grind if you're smart about picking enemy fights and divvying up character skill points. And if you ever need a bit of break, you can invest time in various mini-games like crafting items, horse racing, and a casino with slots and poker, among other things.

Innovation in games is talked about a lot, but it's also great to see traditional gameplay formulas that have been around for decades presented exceptionally well. Dragon Quest XI is one of the best modern examples of this; its beautiful presentation, both visual- and story-wise, combines with a tried-and-true gameplay formula for a journey that’s full of heart and soul. Once you find yourself sucked into the world of Dragon Quest XI, it's going to be hard to put down until you reach the grand finale.

Calling the Switch version of Dragon Quest XI the "Definitive Edition" is bold, but it's no exaggeration--save for a few minor visual downgrades, Dragon Quest XI on Switch improves on the already-excellent PS4 and Steam release in numerous substantial ways.

While most of the core game is the same in terms of story beats, character interactions, and whimsical dialogue, there are numerous quality-of-life improvements (as well as some additions near the endgame) that affect the game experience. Some of these fine-tunings are comparatively small, such as a character's cosmetic battle outfit being separate from their equipped gear and the choice between orchestrated and synthesized music, while others have a substantial impact on the game's flow.

For example, a big part of Dragon Quest XI is the forge, which allows you to craft items, weapons, and armor using materials you've gathered on your quest. Previously, the forge could only be used at sporadically-placed campsites, but now you can dig it out whenever the urge to upgrade emerges--perfect for getting that extra edge during the middle of dungeon crawling. In addition, if you are short on materials needed to make your goods and gear and it's something available in a store, the game gives you the option to purchase whatever you're lacking directly from the forge menu. And for those harder-to-obtain items, you can easily look up where to find them and what foes drop them.

One of the biggest additions to Dragon Quest XI on Switch is the 2D mode. Originally exclusive to the Japan-only 3DS version of the game, you are given the option to adventure through Erdrea in classic, 16-bit style pixel art. Both the 2D and 3D modes deliver the same story content, so you won't miss out on any of Dragon Quest XI's most memorable moments--and if you miss the polygon look, you can swap back and forth at any church in the game. Notably, 2D mode moves at a far brisker pace than its 3D counterpart. While 2D mode lacks voice acting and dramatic 3D camerawork, it delivers significantly faster combat, simpler maps, and easier exploration overall. The lack of elaborate enemy battle animation (as seen in some of the 2D Dragon Quest remakes) is a bummer, but overall, 2D mode offers a fantastic way to explore, grind, and farm efficiently--or just experience a fresh perspective on the game as a whole if you've played it before. (Plus, you can access special quests that take you back to the worlds of previous Dragon Quest titles for the ultimate nostalgia trip.)

Despite some small graphical compromises in 3D mode--rare frame rate stuttering and some occasional pop-in--almost everything in Dragon Quest XI on Switch is an improvement on its original release. If you have been putting off playing this RPG masterpiece, this portable edition is absolutely the way to go--and if you want to revisit it, this version is the perfect excuse to do so. -- Heidi Kemps, September 26, 2019

Heidi has been playing RPGS since her childhood. She put 85 hours into finishing Dragon Quest XI and doesn’t regret a moment of the time spent with her merry adventuring band. Also, her favorite game in the series is Dragon Quest V. Complimentary review code was provided by Square Enix. 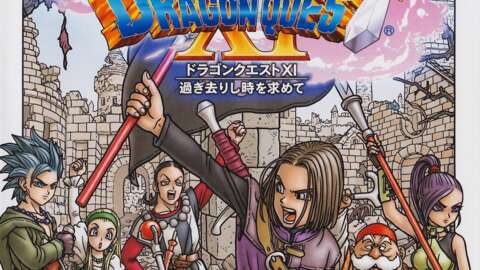 8.3
Sign In to rate Dragon Quest XI: Echoes of an Elusive Age