The beloved Dragon Quest role-playing game series (previously known as Dragon Warrior in the States) has traditionally had a somewhat quiet reception outside of Japan, where, conversely, each release is consumed with fanatic devotion. Dragon Quest VIII: Journey of the Cursed Kings marks a number of firsts for the series: It is the first fully 3D installment, the first fresh series entry on the PlayStation 2, and the first time a Dragon Quest game has retained its proper nomenclature for domestic release. There are plenty of good reasons for RPG fans to pay attention, too, because Dragon Quest VIII is a beautiful, lighthearted adventure that pairs satisfying, classic-style gameplay with a whole lot of charm.

You'll begin with a simple setup: An evil wizard named Dhoulmagus has seized a legendary scepter, cursing the castle from which it was taken and turning the king into a toadlike creature and the princess into a horse. You (a palace guard and hero of this tale) were the only other inhabitant of the castle to survive the tragic events, and you set off with King Trode, the equine Medea, and a portly companion named Yangus to track down the foul magician. That's all the preamble you need to start off on your adventure, and soon you're out meeting the locals and following clues to trace Dhoulmagus' sinister trail.

In addition to the stalwart, powerful Yangus, you'll eventually meet up with Jessica, a self-confident young woman with a fondness for magic and skimpy clothing, and Angelo, a holy Templar knight who's more occupied with drinking, gambling, and the indolent pleasures of life rather than with the noble precepts of his Order. It's this group of four characters that sets out to face the world and its many monsters. Unlike some other role-playing games, Dragon Quest doesn't have dozens of characters of all types to recruit to your cause. But that sort of focus serves the game's simple, straightforward style of storytelling, familiarizing you with your friends as you're introduced to a host of other personable characters on your way to bring Dhoulmagus to justice. In battle, too, each character has a clearly defined set of strengths that you'll learn to bring to bear against your challenging opponents.

Battles are turn-based and randomly occur as you explore the wilderness, though the spacing between encounters feels pretty generous and isn't invasively jarring to your progress. You'll select moves for each member of your team and then turn them loose against monsters as a group. In addition to basic melee, your party will learn a number of spells, from offensive magic that can be used on single enemies or groups, to spells that boost party defense and attack, to healing magic. These spells are largely learned automatically, with enough overlap that you aren't ever forced to rely on just one character for, say, healing. A command called psyche-up lets you boost a character's "tension," which increases your amount of stored attack power until you unleash it all in a single, focused attack for major damage, which is quite handy against tough bosses.

Abilities also come into play, which are learned through spending skill points gained with each level. Each character has four weapon-based skills to spend points on (axes, swords, spears, and so forth), as well as a fifth category that varies from character to character. Boosting the weapon categories lets you do extra damage with that type of weapon, and you can use special attacks that are only available with a certain level of skill. The final category is unique to each person. For example, Jessica's special ability tree is "sex appeal." Putting points into this trait not only teaches her new magic spells, but also generates passive powers, like being able to randomly charm enemies simply by appearing in battle in front of them. There's nothing quite like facing a daunting group of foes, only to have two of them completely forget to attack for a turn because they're too busy admiring Jessica's…attributes.

There are lots of amusing little touches like this in battles, from cat creatures randomly grooming themselves instead of fighting, to little squid kids that get called away by mom midbattle, to imps that valiantly try to cast spells on your party (only to fall over in defeat because they don't have enough MP to cast the spell in the first place), to spirits that are content to stare blankly into space and hardly ever attack at all. These random factors not only serve to make some encounters unbearably cute, but they also can end up totally saving your bacon, because monster strength in Dragon Quest tends to ramp up quite fast. When you can have six or eight enemies facing you at a time--some of which can heal other monsters, some of which will incessantly call their friends into battle, some of which can spring powerfully devastating attacks, and some of which have the nerve to resurrect dead allies--even the most routine jaunt across the countryside can easily become as perilous as a boss fight. You'll rarely be autopiloting through random battles, particularly as you move into new areas and encounter stronger foes. There is also a day-night cycle, so if you venture outside in the evening, you can expect to run into packs of really nasty baddies.

If you're used to just brushing aside the small fries on your way to find a boss to conquer, the first few party wipes will wake you up pretty quickly. Fortunately, a wipe doesn't mean game over, as you'll appear at the church where you last saved. Unfortunately, you'll be without half your gold--the price you pay for negligence. This might seem harsh, but you're also given lots of tools to use to quickly withdraw from bad situations, too. Early on you learn a spell to exit whatever dungeon you might be in, as well as a spell that lets you warp instantly to any save spot you've visited, as well as select dungeons. You won't have to slog all over the world map just to try to level up. The difficulty of battles, especially initially in the game, can be pretty daunting. But they're also interesting because of this, so you won't be mindlessly smashing the X button and falling asleep on your way to the next town. Besides, it just gives you plenty of time to admire the great-looking enemies that are all around you.

The visual style is a unique one, and much of that's due to series artist Akira Toriyama's crazy designs (he's also the artist behind Dragon Ball Z), which are, for the first time, getting fully realized in a 3D world. The characters are all vibrant, fluidly detailed, and animated and striking to watch in motion, as are the many sorts of monsters you'll meet. For Dragon Quest fans, fear not...all your old favorite monsters are here, from skeletons, bat-winged drakies, and shambling mummies, right down to the humble, smiling slimes (and their tough metal counterparts). All monsters carry their traditional poses, but they are now fully animated and brought marvelously to life with a variety of motions and dangerous skills they can levee against you. The world you'll wander is wide and sweeping, with all manner of mountains, grassy plains, deeply blue streams and lakes, expansive deserts and oceans, and clouded cursed castles and tiny hamlets, all of which are great fun to explore. The look of the game is quite cohesive and beautiful, a mark of the skilled work of the developers at Level 5, who were responsible for the Dark Cloud games.

The music that accompanies your journey is easily as rich as the visuals, with a spread of orchestral sound that runs the gamut from cheery town tunes and peppy world-roaming music, to dungeon music that evokes the sound of water dripping from stone walls and danger lurking around every corner. Along with all the new music is a host of classic tunes and sound effects, which series fans will be delighted to hear reprised in their updated forms. Plus, there is a good amount of surprisingly competent voice acting. The Japanese original contained no voice-over work, but it was added for the English version during story sequences. By and large, all the speech is well suited to the characters and it's delivered well throughout the game. There's the odd spot of over-the-top delivery, but considering the truly crazy characters with whom you'll be consorting, it's hard to get upset at King Trode for the occasional shrill squeak when he's basically a wronged royal in the form of a midget troll.

The adventure is a lengthy one, easily topping 50 hours or so for a normal play-through, and more if you want to get into all of the side activities. There's a whole alchemy side game that involves combining various items to get new accessories, items, weapons, and armor; a quest to scour the world for mini-medals for a bizarre princess; a bunch of optional creatures to battle; skill points to max out; and more. Once you finish the game, there's even an additional ending you can get by loading up your save file again (no saved game+ business). Dragon Quest VIII definitely offers a lot of content for the curious.

Dragon Quest VIII: Journey of the Cursed King represents a style of RPG that's largely not represented in an age of grandiose cinematic cutscenes, convoluted storylines, and huge character hosts. It's a simple yet engaging and lighthearted tale of four friends fighting against a great evil, with a focus on challenging battles, whimsical abilities, and fun. It's a classic formula that doesn't take very many risks, but instead simply delivers a great, well-made adventure. Whether or not you were a fan of the series previously, it would be worth your while to give this charming RPG a shot.

View Comments (7)
Back To Top
9
Superb
About GameSpot Reviews 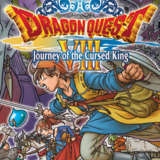